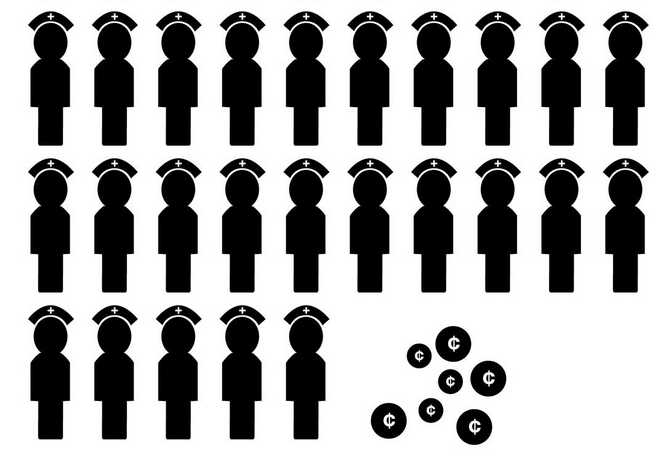 PublicSource requested the salaries for all county employees in 2012, 2013 and the first half of 2014 by filing a Right-to-Know request with Allegheny County. We asked that the county separate the salary information into regular pay, overtime pay and bonuses.

We first filtered the data by department, to isolate the data for the Kane Regional Centers, and then by job type, such as nursing assistant.

We had the total cost of overtime, but we wanted to calculate the number of overtime hours. Each nursing job has three different rates based on experience. For instance, the base hourly rate for nursing assistants is $16.32, then goes to $16.72 and, finally, $17.06.

Kane Executive Director Dennis Biondo said a shift differential of about $0.75 to $1 per hour is added to the base hourly rate for overtime shifts. For all calculations, we used the middle rate, with a $1 shift differential applied, to estimate the number of overtime hours worked by each employee.

We did not include a bonus of roughly $0.35-$0.50 per hour for nurses who are training a new hire, nor did we factor in double or even two-and-a-half time per hour paid for holidays. Neither was paid frequently enough to greatly affect the outcome.

We also wanted to calculate how many new employees would be needed to fill the overtime and whether it could save the county money.

The nursing assistants, as a group, worked about 90,000 hours of overtime in 2012 and 2013. We took each yearly figure and divided it by 2,000 hours, or the approximate workload of a full-time employee working 40 hours a week for 50 weeks. From those calculations, about 45 new nursing assistants working full time could cover the overtime of the current staff.

We took the average Kane nursing assistant salary — $34,681 — and multiplied by 45, representing the new nursing assistants, for a total base salary of $1,568,745. Now, we needed to figure out how much benefits such as healthcare and pensions would cost.

Biondo said that benefits made up 40 to 45 percent of cost of hiring a new employee. But when you subtract overtime from personnel costs, it’s closer to 50 percent for the Kane centers, according to the 2015 Comprehensive Fiscal Plan. We thought there might be some unknown costs beyond base salary in the personnel line.

So we looked at other departments to see if they were close to his original estimate.

In 2013, the ratio for the jail employee benefits was 42.5 percent and 42.8 percent for the Department of Human Services, two of the other big areas for overtime in county government.

We felt comfortable settling on the middle ground and used 44 percent for our calculations.

We multiplied 44 percent times the base salaries for our hypothetical new employees to get a total cost of hiring 45 new nursing assistants -- about $2,258,993. While this should be treated as an estimate, not an exact figure, we felt it was fair to say hiring new employees would cost slightly less than the $2.4 million spent on overtime worked yearly by the nursing assistants.