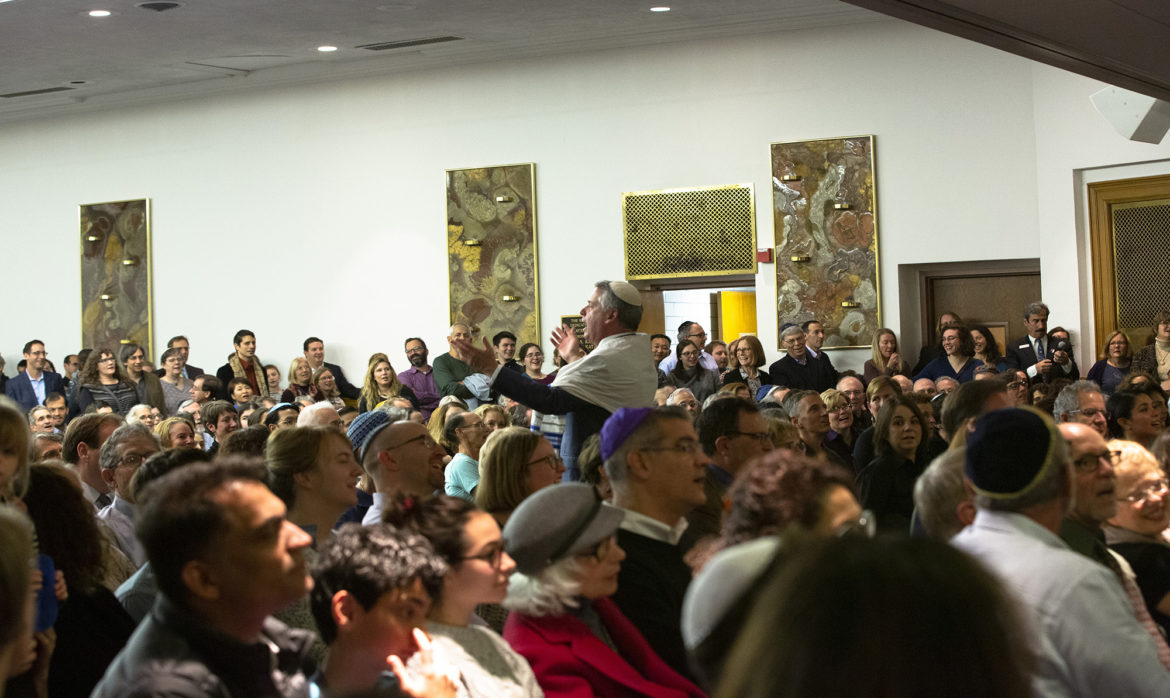 Shabbat services at Temple Sinai on Friday evening, six days after the shooting inside Tree of Life synagogue. (Photo by Heather Mull for PublicSource)

After the tragedy at the Tree of Life synagogue, Pittsburgh came together for Shabbat a week later.

It started on Friday with the Solidarity Shabbat in Squirrel Hill's Temple Sinai. The temple was so full even Rabbi Jamie Gibson was surprised. Some people had to stand along the walls and the crowd spilled into the hallway.

Hundreds upon hundreds of people — at least 900 by Gibson’s estimation — filled the temple on Friday. On Saturday, too, crowds poured into temples across Squirrel Hill, the center of Jewish life in Pittsburgh.

“We are here not for a memorial service, not a rally, not for a vigil. We are here as an act of spiritual resistance,” Gibson said during Friday evening’s interfaith service. “We are feeling a need to be together.” 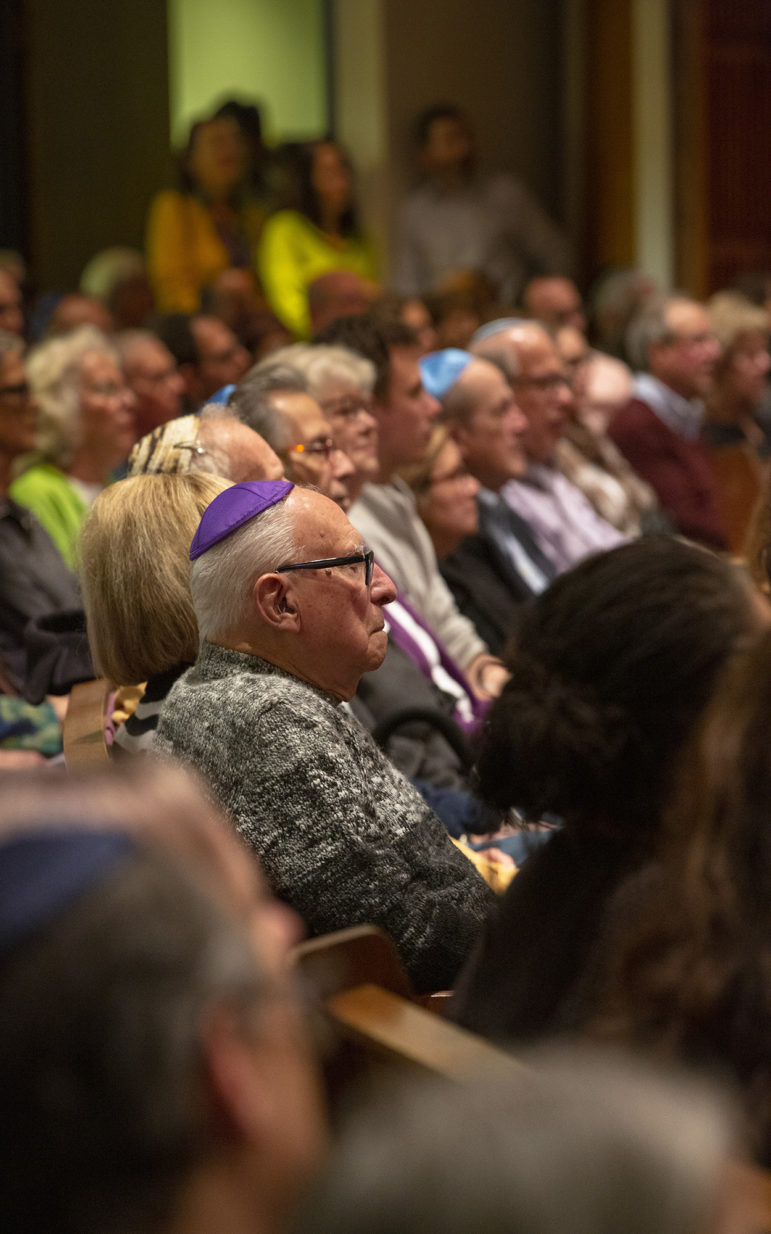 People gathered at Temple Sinai on Forbes Avenue on Friday night for the Solidarity Shabbat service, which was open to the general public as an invitation to pray for unity in the aftermath of the Tree of Life shooting. (Photo by Heather Mull for PublicSource)

A week after a white, anti-Semitic man killed 11 Jewish congregants at the Tree of Life synagogue and injured six others, four of whom were police officers, Pittsburgh’s Jewish community came together over the weekend for the first Shabbat services since the attack, opening their doors to non-Jews as well.

The gatherings were both cathartic and soothing. Fittingly, the week’s Torah portion reflected that theme of solidarity in the midst of tragedy. Rabbis at several services related the stories of the deaths of Abraham and his wife, Sarah. Rabbi Daniel Wasserman noted how Sarah’s passing shook Abraham and Gibson highlighted how Abraham’s two estranged children, Isaac and Ishmael, came together after his death. Wasserman, of the Shaare Torah Congregation, highlighted Abraham’s resiliency.

“Abraham’s life collapsed [but] he chooses to look into future,”  Wasserman said on Saturday. “As you look into the future what do we want to build? Hatred? Injustice? That is not our way.” 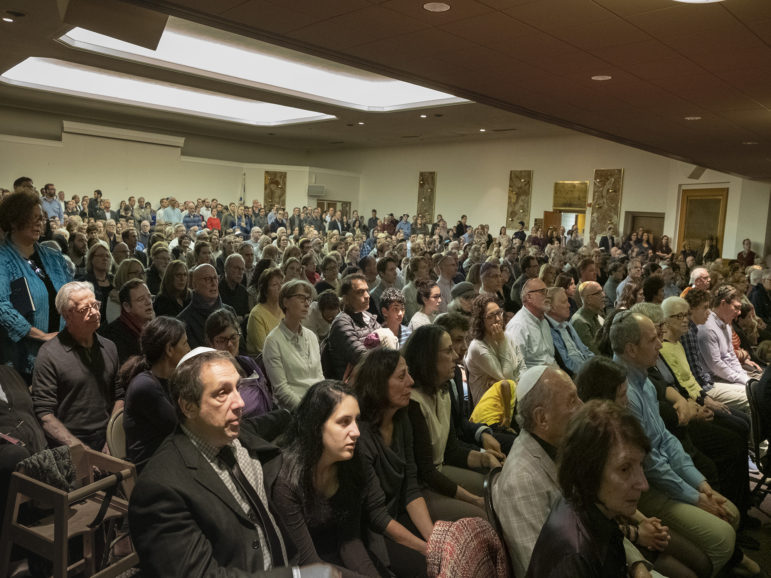 Shabbat services at Temple Sinai on Friday evening, six days after the shooting inside Tree of Life Synagogue killed 11 and wounded 6 people. (Photo by Heather Mull for PublicSource)

Gibson, the night before, had a similar appeal: “The task of tomorrow is peace and justice,” he said.

Rabbis at Temple Sinai and Beth Shalom read the names of the 11 dead and prayed for them. Some congregants cried. Police officers were present at the doors of temples across the neighborhood. As worshippers entered Shaare Torah on Saturday Officer Tyler Pashel of the Pittsburgh Bureau of Police stood watching along with the ushers. That morning was Pashel’s first assignment, he said, since he responded to the Tree of Life shooting, where he sustained a knee injury.

“I was happy to be here and be with the community,” he said.

Jonathan Young, who lives in Squirrel Hill and is the president of the Shaare Torah Congregation Board of Trustees, said he is aggrieved how tragedy at the Tree of Life would now dictate armed security at the synagogues during services.

“One of the hardest things is that we have always been a very open place,” he said. “We may now physically be a little less open but will continue to be welcoming to Muslims, Christians, whoever wants to join.” 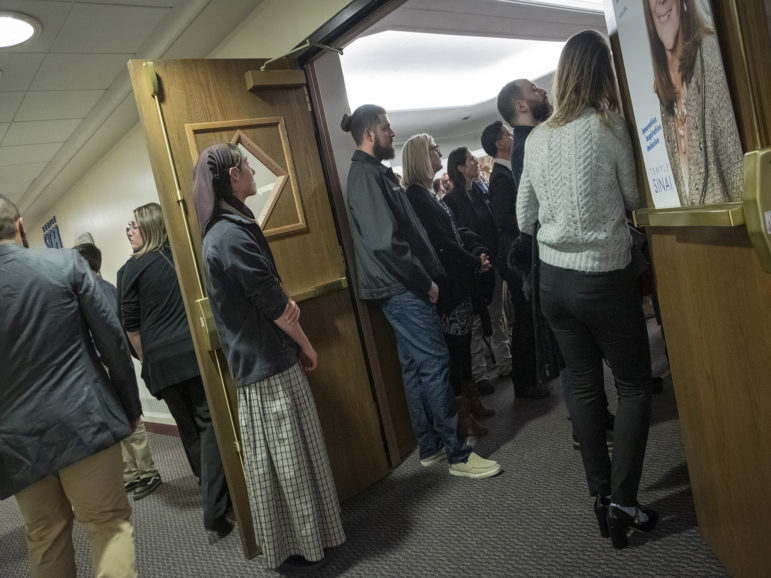 A Bruderhof woman listens to the Kaddish prayer for universal peace outside the crowded Temple Sinai auditorium during Solidarity Shabbat. She and a group from the New Meadow Run Bruderhof community, which is a German Anabaptist religious community similar to Hutterites, Mennonites, and Amish, travelled an hour and half to Temple Sinai from Farmington, Pa., to show support for the Jewish community. (Photo by Heather Mull for PublicSource)

At Temple Sinai’s interfaith service Friday night, Wasi Mohamed, the executive director of the Islamic Center of Pittsburgh (ICP), addressed the congregation in a show of solidarity. ICP and other Muslim groups raised more than $300,000 in donations online and offline to support Tree of Life. He said the Jewish community coming together in the wake of a tragedy gave him hope.

“In a world that seems like it’s getting darker and colder... Squirrel Hill and the Jewish community here has provided that beacon of light,” Mohamed said. “You gave us all more hope. You didn’t know how much that was needed.” 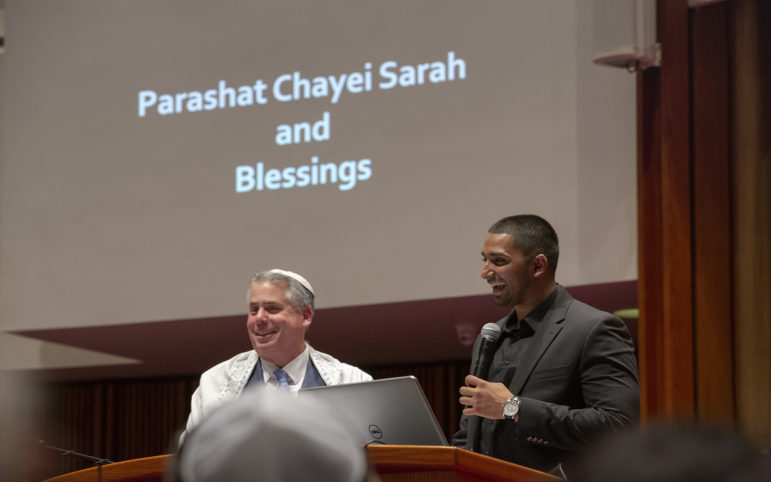 Wasi Mohamed, executive director of the Islamic Center of Pittsburgh, joined Rabbi Jamie Gibson at Temple Sinai for Solidarity Shabbat service on Friday. The Muslims Unite campaign in a week raised over $200,000 in donations for victims of the Tree of Life shooting and their families. (Photo by Heather Mull for PublicSource)

Ronit Wiesenfeld fondly remembered David Rosenthal, who was killed with his brother Cecil at Tree of Life., Wiesenfeld said the community coming together has helped her begin to heal. Her family has attended Shaare Torah for the past several years and she knew many of the Tree of Life victims through community gatherings and mutual friends. She recalled how Rosenthal once helped her prepare food for an event he was attending at Shaare Torah. She said she feels that at this time of mourning, the Jewish community is still in a state of shock. It will take a long-time to heal, she said.

Politics also peppered some of the services, in between prayers and readings from the Torah. Beth Perlman, wife of Rabbi Jonathan Perlman who leads the New Light Congregation, one of three congregations that meets at Tree of Life, spoke at Congregation Beth Shalom on Saturday and noted that God created people with free will, giving the choice to do good or evil.

“Our job is to ensure the people who choose to do evil don’t have access to assault rifles,” she told the congregation.

Rabbi Jeffrey Myers, who leads the Tree of Life Congregation, also spoke at Beth Shalom, reflecting on the week’s Torah portion, noting that it was “all about love, kindness and peace.”

“There’s one group that doesn’t get that,” he said. “They all live in Washington D.C.”

Myers also defended decision to meet with President Donald Trump last week, three days after the shooting. The president’s visit was controversial, as thousands of people signed a letter asking that he not visit. Pittsburgh Mayor Bill Peduto said Trump should delay his visit until after the funerals of victims ended.

But Myers said he used the visit as an opportunity to tell the president that his rhetoric was inciting violence across the country. “Hate speech leads to hateful action,” he said he told Trump. Myers also said that he felt compelled by Jewish law to welcome all guests, even if he disagrees with them politically. 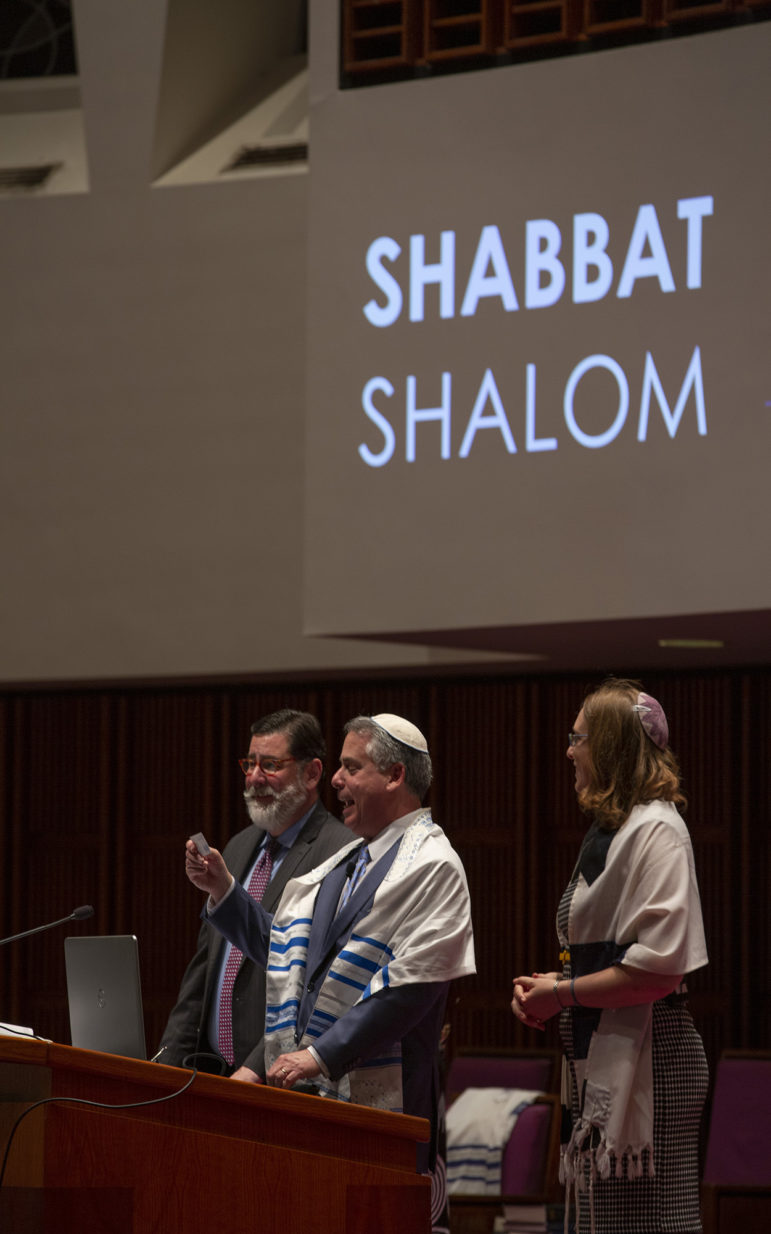 For Sasha King, a black Jewish woman who helped write the open letter asking Trump not to visit, politics was an inherent part of the tragedy. When white people feel threatened by the growing diversity in the country, she said, they put others at risk. She said black people have to live with that risk every day while white people don’t.

“The hardest thing for me is seeing that their innocence was taken away because they had a certain idea about America,” she said. “I’m not shocked, I’m a brown Jew. It’s just sad for me. I always believed it could happen here.”

But, she said, seeing the community come together has been good for her, especially since she doesn’t always make it to services every week.

“It was really nice to be in touch and be in the community again and stand in solidarity with those who have died and those who are still here,” she said. 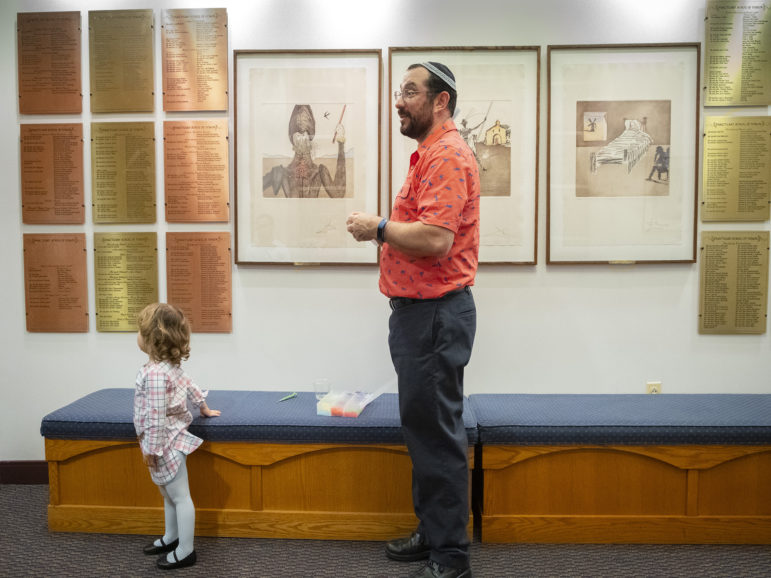 In the lobby of Temple Sinai during Solidarity Shabbat services. (Photo by Heather Mull for PublicSource)

For Robert Kraftowiz, a retired physician and member of Congregation Dor Hadash, Saturday’s service at Beth Shalom was a way to reconnect, even though he’s been grieving all week in observance of the mourning ritual - shiva. He sat with one of the caskets for a period of time and tried to help the community by collecting food and prayer books for people who need it.

“It’s felt like having a cloud that follows me around constantly from the morning until the night — a cloud that wasn’t there until last week,” he said. But, he added, “It was nice being with friends and community. We all know each other.”

He said he knew doctor Jerry Rabinowitz, one the 11 killed, well. He and Rabinowitz occasionally worked together. Rabinowitz helped get Kraftowiz into cycling and even gave one of his daughters her first job. Rabinowitz was his mother’s doctor, too, treating her until the moment she passed away.

“You’re conscious now of how precious your friendships are,” he said. 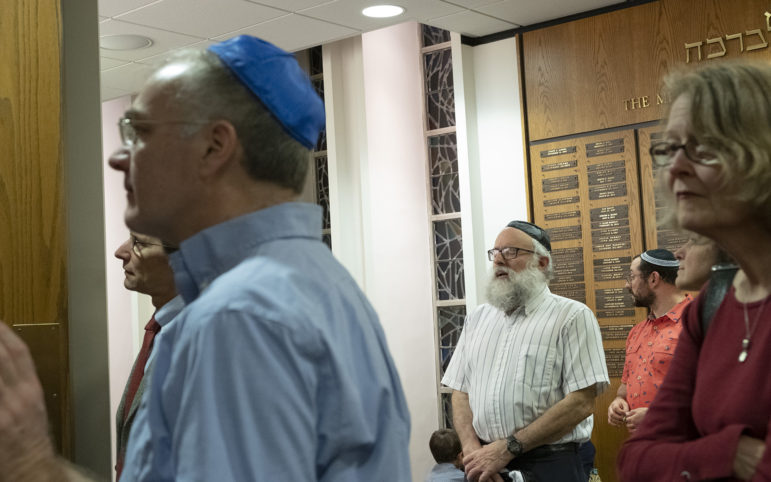 A worshipper, deep in prayer, stands in the lobby of Temple Sinai during Solidarity Shabbat in Squirrel Hill. (Photo by Heather Mull for PublicSource)

Saima Sitwat is a writer and educator based in Pittsburgh. She can be reached at saimaadil@hotmail.com.