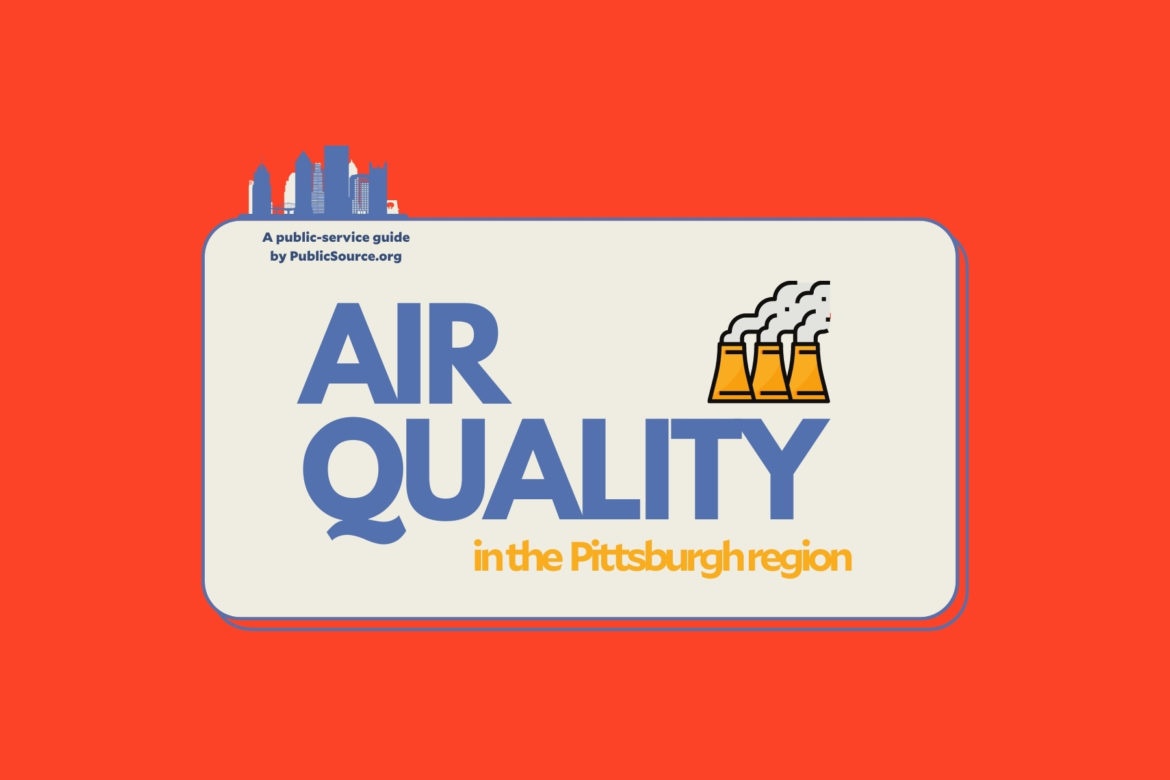 Below is a PublicSource public-service guide to help you, our readers, access vital information about living in the Pittsburgh region. If you have questions or ideas for new guides, please email info@publicsource.org.

I know there are pollutants in my air. Is it still safe to breathe?

The short (and probably unsatisfying) answer is: it depends. It depends on who you are and who you ask.

In 2020 for the first time, the Pittsburgh region met the U.S. Environmental Protection Agency’s standards for clean air at all of its testing sites. This achievement came despite ongoing disparities in air quality disproportionately affecting low-income neighborhoods and communities of color. This data suggests that, for most Pittsburghers, at most times, yes, the air is safe to breathe.

Yet, when the Environmental Protection Agency [EPA] sets its standards for “safe,” it means safe for adults without conditions like lung disease, asthma or heart problems. The elderly and children are also considered sensitive populations. Households with children have extra reason to pay attention to air quality because high pollutant levels can worsen asthma symptoms and also increase children’s likelihood of developing asthma.

The EPA has regularly revised its standards since setting them in the 1970s, and they’ve tightened as scientists have learned more about the negative health effects of various pollutants. Some scientists and environmental activists argue the current EPA standards aren’t strict enough. In 2019, for example, a panel of experts suggested tightening the restrictions on fine particulate matter, but the change was rejected. Had the standard been tightened, Pittsburgh may not have held on to its “safe” score.

The American Lung Association [ALA] “State of the Air” report offers a harsher take. The ALA focuses only on the two most widespread air pollutants, ozone and fine particulate matter, and grades the whole county based on its worst air pollution readings. These come from the Mon Valley near U.S. Steel’s Clairton Coke Works.

Although the ALA acknowledged that Allegheny County’s air quality has improved, its most recent report still showed the county earning a failing grade in all possible categories.

Why does air quality vary?

While the air might have improved in the long term, brief spikes in pollution can have health impacts. Pittsburgh air isn’t always “safe” by these measures, even if long-term pollution has decreased.

Air quality can depend on your specific location: it can be worse if you live close to busy roads or one of the county’s “Toxic Ten” polluters, and better if you live near dense forests.

Air quality can also vary indoors. If you cook with natural gas and your kitchen lacks proper ventilation, for example, that can lower your air quality.

What actually is the AQI? How is air quality measured?

If you live in Allegheny County, you’re probably familiar with the term “orange air quality alert.” These alerts tell residents that the air is unhealthy for sensitive populations.

In 2020, the Pennsylvania Department of Environmental Protection issued 12 orange air quality alerts for Allegheny County. Half of these days were for smog (ozone) in the summer. The other half were for industrial emissions (fine particulate matter and sulfur dioxide) in the winter.

When you hear these “orange alerts,'' you’re really getting information about the local air quality index [AQI].

The AQI is a scale the EPA created as a uniform way of reporting air quality in locations across the United States. Cities and regions with populations over 350,000 people are required to report their AQI daily.

The AQI scale runs from 0 to 500. The following chart represents the color-coded levels (including orange) within that scale:

A visualization of the AQI scale from AirNow.gov.

The AQI is essentially a shorthand for reporting whether a city or region is meeting the EPA’s regulations for the six of the most common air pollutants. The air pollutants the EPA regulates are:

The EPA sets different limits or standards for each of the six pollutants. These standards are called the National Ambient Air Quality Standards [NAAQS].

Counties are required to measure these pollutants. Often they do so hourly and at multiple sites. The monitoring stations in Pittsburgh are intentionally located near high-pollution areas so the samples tested represent the worst-case scenario for air quality.

Once officials have measured the amount of a pollutant in an air sample, they translate the measurement into a score on the 500-point AQI scale.

To come up with the city’s overall AQI for the day, officials use the worst score among all the pollutants.

The pollutant responsible for that worst score is called the “main pollutant.” Daily AQI reports will often list which pollutant is the main pollutant, so people susceptible to it can respond. 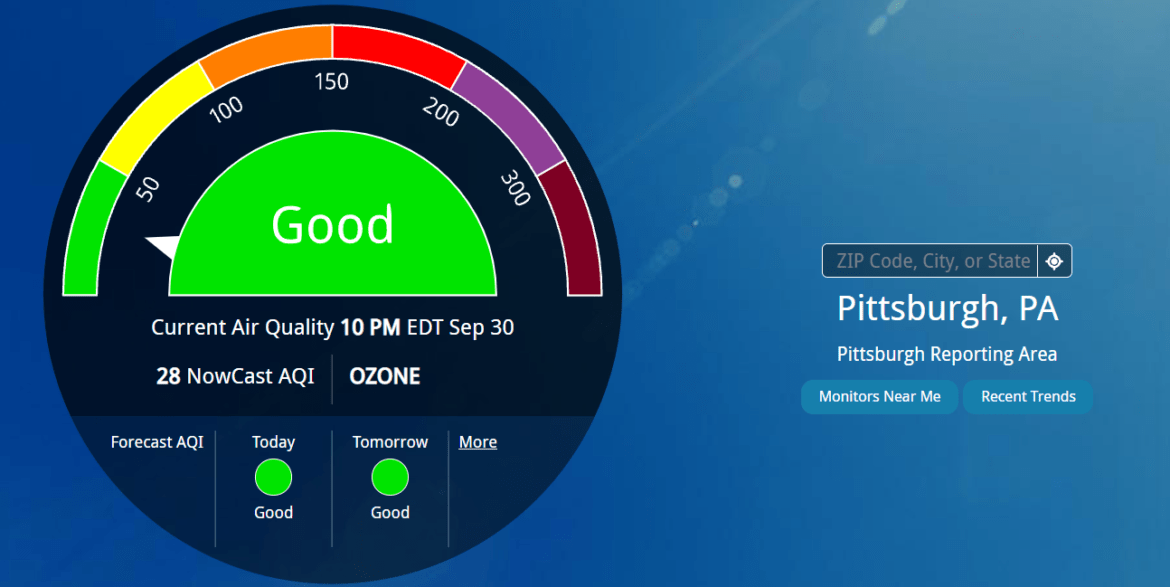 Below the dial, this graphic reads “28 NowCast AQI, Ozone.” That’s letting you know that ozone was the worst pollutant in the area at the time. From AirNow.gov.

What is an inversion? Why does it cause the air quality to be so bad?

Under normal conditions, air near the ground is warmer than higher up in Earth’s atmosphere because the Earth’s surface absorbs sunlight. The warmer, lighter air rises, and the cooler, heavier air above it sinks. This process is known as convection. It naturally moves pollutants from ground level to higher altitudes.

In the case of an air inversion, the opposite happens. The air near the ground becomes colder than the air above it, and therefore doesn’t rise. The warm air acts as a lid, trapping the layer of cold air (and all of its pollution) near the Earth’s surface. Urban areas and places surrounded by hills or mountains are particularly vulnerable to these events.

Inversions can happen in hot or cold weather. Winter inversions are particularly common after snowstorms since the snow on the ground reflects the sun’s warmth back up into the atmosphere. They can also happen when cold and warm weather occur in quick succession, as with the Pittsburgh area’s notorious Christmas inversion of 2019. Climate change increases the likelihood of such inversions.

How do I know the air quality in my area today? Why would I care to look it up?

If you want to know the air quality in your own house or backyard, you could buy an air quality monitor from a company like PurpleAir for about $250. But, for most people, this is probably unnecessary. There are a number of free online tools that let you access information about your local air quality:

AirNow: A U.S. government website, AirNow allows you to monitor the current AQI in your area, searching by city, state or zip code. Its interactive map shows local government monitors for ozone and particulate matter. You can also view recent trends and an AQI forecast.

Allegheny County Health Department Air Quality Dashboard: Revamped in April 2021, the department’s Air Quality Dashboard lets you view data on fine particulate matter (PM2.5), ozone and sulfur dioxide, sorted by individual monitor. You can view current AQI values or use the “over time” button to customize a graph of past data. You can also file an air quality complaint.

The Allegheny County Health Department Air Quality dashboard allows you to look at trends over time. This graph, for example, shows the daily AQI values registered for fine particulate matter (PM2.5) at the Liberty monitor from 2016 through September 30, 2021. Source: ACHD

Smell PGH: This local app is a crowdsourcing tool. If your air smells toxic, you can report it on the Smell PGH app. The Allegheny County Health Department uses these reports to better monitor air quality and identify pollution sources. As a user, you can also see other people’s reports and a map of all reports filed on any given day.

IQAir AirVisual: This platform, created in Switzerland, lets you search the AQI of locations all around the world.  Searching by ZIP code or city, you can see your area’s current AQI and an AQI forecast, as well as basic weather data. The website features a “real time” interactive map where you can see AQI values reported from government, company and individual monitors. It is also available as an app.

AirData: Like AirNow, AirData is a resource created by the U.S. government. While AirNow shows your area’s AQI, AirData lets you see the data behind that AQI. You can look at pre-generated summary reports or explore the interactive map and download data of your own. You can also make your own graphs or data visualizations. By using the “select layers” function on the interactive map, you can view monitoring sites for any or all of the six most common pollutants the EPA monitors. If you click on a monitoring site, you can then download an Excel file with the daily or annual data for any year the site was active.

(The EPA does not make recommendations for air purifiers or cleaners.)

You might care to check the air quality index for two reasons. First, it allows you to make informed decisions for your personal health. The Centers for Disease Control and Prevention recommends taking actions like limiting your time outdoors and avoiding vigorous exercise when the air quality is poor.

You can also take actions to avoid worsening the problem, like limiting your car emissions. All wood-burning activities, including campfires, are prohibited on Air Quality Action days, which are days the Allegheny County Health Department expects the county to exceed the national standards for ozone or fine particulate matter.

How can I learn more about local groups advocating for cleaner air in Allegheny County?

Here are several of the local groups working on this issue:

Update: This story was updated on October 5, 2021, to reflect that Allegheny County passed an "Episode" rule to limit industrial emissions during inversions.

This story was fact-checked by Elizabeth Prall.