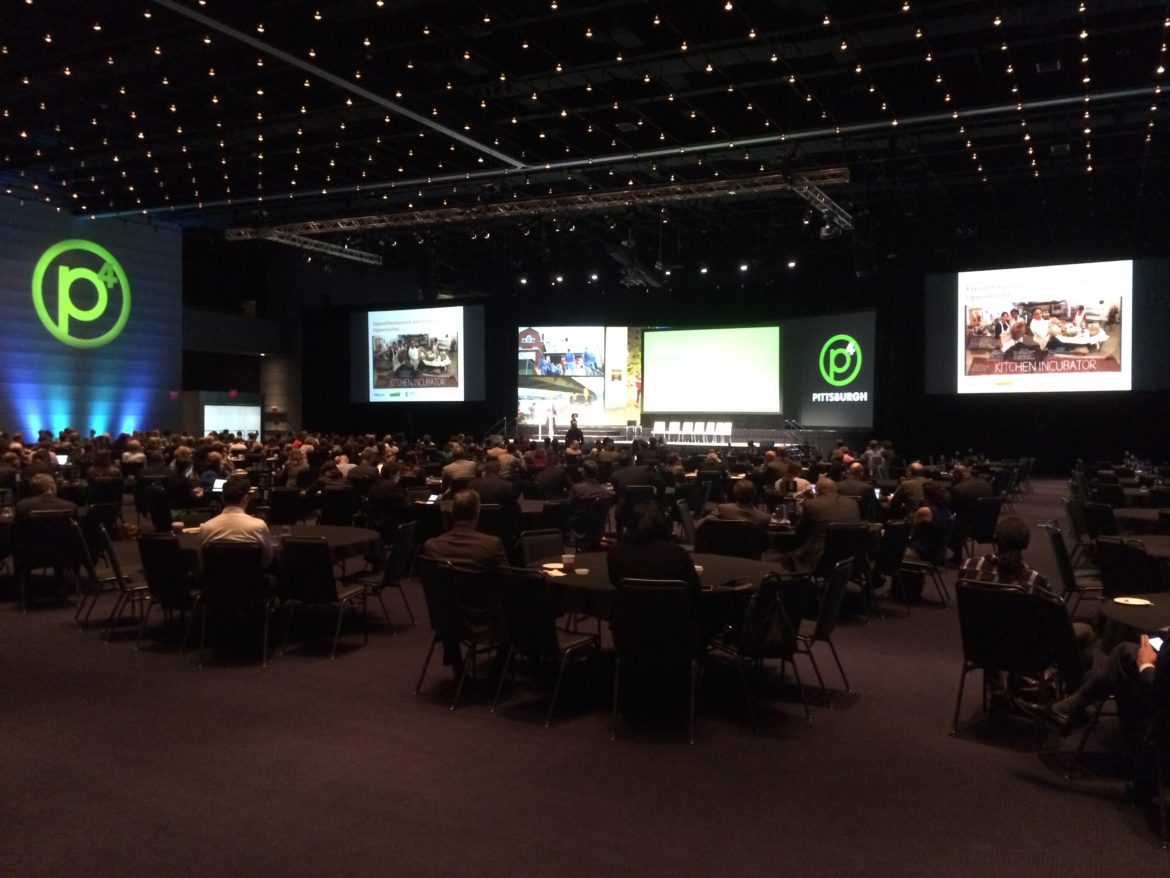 The p4 conference at the David L. Lawrence Convention Center

When Derrick Tillman graduated from the University of Pittsburgh in 2004 with a degree in information science, he struggled to find his first job. He had good grades, completed internships and networked. All the things that should lead to success.

“But when it came to being given an opportunity, I was being passed up,” he said at Wednesday’s p4 conference panel on equitable development.

Tillman says it took a fellow black man to give him a chance.

As part of a community problem-solving fellowship with Coro Pittsburgh, he met Greg Spencer, who set him up with colleagues to conduct mock interviews. Still not having success, Spencer gave him a position at his company, Randall Industries.

“I always look at that as really a springboard for everything that I'm doing today in development,” Tillman said.

Tillman, the president of Bridging the Gap Development, is planning to break ground on 36 affordable housing units in the Lower Hill early next year.

The project will partner with the Energy Innovation Center on workforce training for its residents, provide financial literacy classes and he recruited 36 employers to line up positions for all 36 residents.

“I look at that same opportunity that Greg gave me as being able to give to these residents,” he said.

The project is an example of what equitable development can look like in Pittsburgh, helped by a 9 percent Low-Income Housing Tax Credit from the Pennsylvania Housing Finance Agency.

Equitable development is the central theme of this year’s p4 conference, sponsored by the Pittsburgh mayor’s office and The Heinz Endowments*. It means as Pittsburgh grows and prospers, every kind of resident — rich/poor, black/white — should equally prosper from that success. The tide lifting all boats.

But, Pittsburgh has yet to answer the key question on equitable development: How does the city integrate affordable housing in growing, successful neighborhoods, such as East Liberty or Lawrenceville? Is it too late?

In addition to Tillman’s Hill District project beginning next year, the $30 million Choice Neighborhood project on the border of East Liberty and Larimer just completed its first phase last week. Of the 334 planned units, 85 have been completed and 56 of those are affordable. The city’s four major foundations are building an entirely new community — Almono — within Hazelwood.

Last year’s p4 conference resulted in metrics — 12 categories in all — that Pittsburgh Mayor Bill Peduto hopes will become the guiding force to evaluate publicly-aided development. He wants the Urban Redevelopment Authority to adopt it by next year and for the City Council to pass it into law. Councilman Daniel Lavelle hopes that the affordable housing trust fund bill before City Council passes before the end of the year. Those actions could shape the next wave of development in places like East Liberty and Lawrenceville.

“The ideal [is] that we would see a community develop in a way that folks who are already there and who have lower incomes are not forced out because there is growth. And that they have the opportunity to prosper alongside the people who are coming in,” said Grant Oliphant, president of The Heinz Endowments.

“We don't want to create a community for affluent newcomers,” he added.