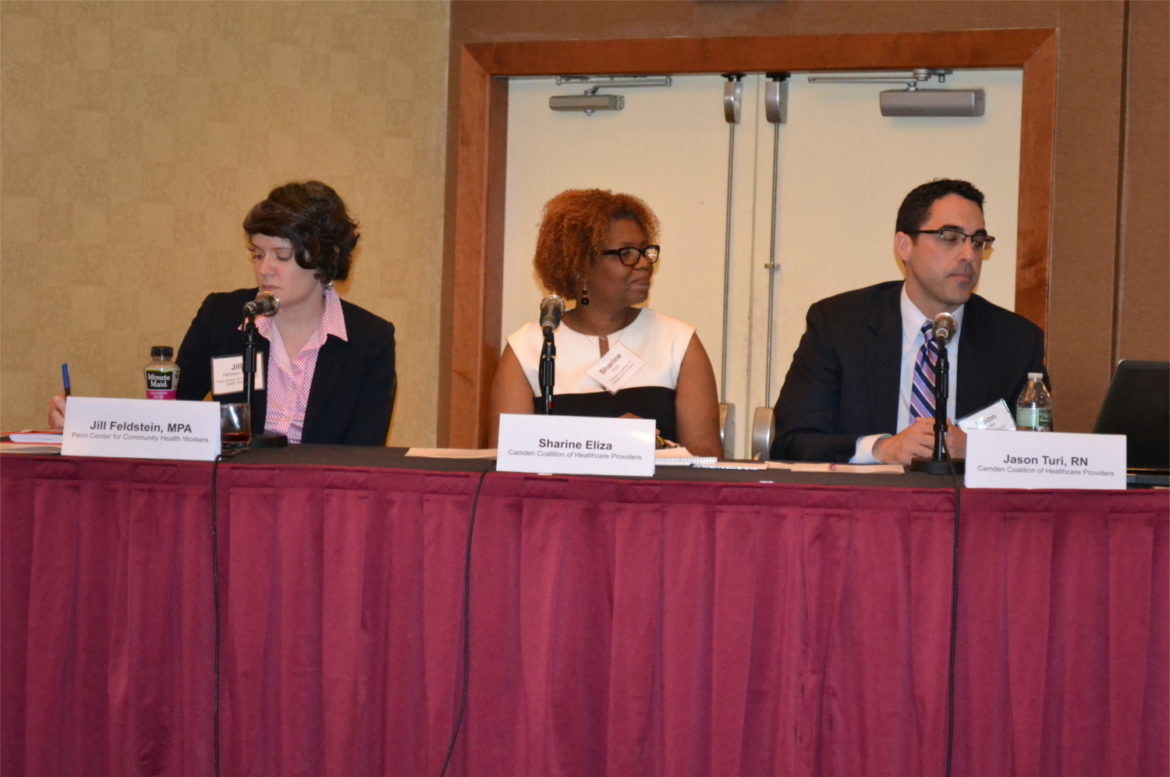 One day about five years ago, Sharine Eliza was working as a medical assistant in Camden, N.J., when she was warned about the next patient.

He was difficult, and always exasperated with the doctor. He wouldn’t take his medications and he frequently ended up in the emergency room because of it. The 72-year-old man was receiving hospice care, but he continued to smoke cigarettes and drink a 12-pack of beer every day.

Eliza struck up a conversation with him while waiting for the doctor. She learned that he’s a native Spanish speaker, so the English instructions from the doctor and on the pill bottle confused him.

“I embraced and understood his problems,” said Eliza, who also speaks Spanish.

Days later, she visited him at home for a cup of coffee and noticed he needed help around his home; she arranged for him to get a home health aide.

Without realizing it, Eliza had begun her new career as a community health worker. Now, her unintended first client is off hospice care, taking his meds and indulging in only a few brews a day.

It’s this kind of improved health outcome among underserved populations and healthcare cost reduction that is driving talks about developing a workforce of community health workers in Pennsylvania and the nation.

On Wednesday, the Pittsburgh-based Jewish Healthcare Foundation convened about 80 people in the healthcare field for a policy summit in Harrisburg to move toward establishing a statewide training and certification model for community health workers.

“Anyone dealing with the health of the population deals with accountability. It comes with a certain authority,” said Karen Wolk Feinstein, the foundation’s president and CEO. “If you give people training and skills, if you give them a certification, it’s just a way of respecting the role.”

The foundation, which also supports PublicSource, plans to direct these services to senior Pennsylvanians who are at risk of being placed in nursing homes or admitted to hospitals.

Community health workers worldwide are most frequently deployed to better the health of children and mothers, to reduce gender violence and inequality, to manage chronic disease and to promote nutrition, exercise and other preventative health measures.

Ultimately, it would be up to the state’s Department of Health to formalize how community health workers would be integrated into healthcare teams that include doctors, nurses and other medical professionals, as well as how they would be reimbursed for their services.

Texas, Massachusetts, Oregon and a handful of other states already have an infrastructure developed for community health workers. About 20 other states are discussing it.

State officials and advocates agree that there needs to be evidence of what community health workers (CHWs) can achieve before putting in the effort to train and certify a large workforce.

Here are examples of CHW impact from the summit:

Source: The Jewish Healthcare Foundation and the Network for Excellence in Health Innovation.

The Department of Labor estimates there are about 45,000 community health workers in the United States. But because the workforce isn’t clearly defined, and there are several other names for it, like outreach worker and health coach, there could easily be double or triple that number doing this kind of work.

The majority of community health workers (CHWs) identify as people of color and as female. About half are between the ages of 30 and 50, and nearly 60 percent have education beyond a high school diploma, Feinstein said.

CHWs help people monitor their medications, sign up for home-delivered meals, ask questions at a doctor’s appointment, order the correct shower chair and fill a host of other needs.

Like Sharine Eliza, some people have become CHWs organically through other jobs associated with health or social work. Some seek out the positions at agencies advertising the jobs. And others are recruited at churches and community groups by organizations like the Penn Center for Community Health Workers, which is associated with the University of Pennsylvania.

The center employs about 20 CHWs who serve about 1,500 patients annually, said Center Director Jill Feldstein. They have found many of them by posting flyers and holding meet-and-greets to get a sense of applicants’ interpersonal skills.

They want people who are not only able to learn the ins and outs of the healthcare system but also share life experiences with the people they’re helping, Feldstein said.

Because so much of the job is based on building relationships, some CHWs and health officials are resistant to the idea of certification.

“We don’t want the process of certification to get in the way of community health workers making progress and getting in touch with people in the community,” said David Kelley, the chief medical officer for the state Department of Human Services.

“This is a very human interaction. That’s not certifiable,” said John Lovelace of UPMC Insurance Services.

Others believe certification would pave the way to better recognition and funding of the service.

Gail Hirsch, director of the Office of Community Health Workers at the Massachusetts Department of Public Health, said certification provided a professional identity. Certification is voluntary in Massachusetts, but they find most CHWs want it. “We want to maintain the grassroots nature while building the recognition of their value,” she said.

Eliza, who is paid $16 an hour and holds two jobs to support her family, said she thinks that certification could help CHWs in any state make an argument for a boost in average pay.

“It is a 24-hour job and we can bring change to community health,” she said. “I do think the pay is too low for what we do.”