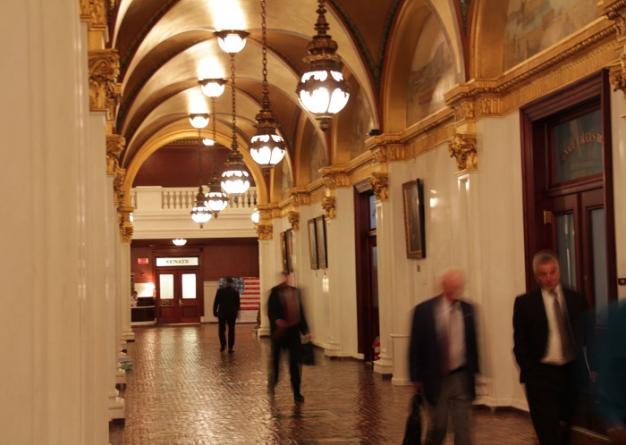 Greg Vitali has been a state representative for more than 20 years. He saw the rise of the natural gas industry in Pennsylvania mainly through the lens of the state Capitol. About five or six years ago, he says, lobbyists for the industry began showing up. And they’ve never left.

“Drillers have this constant presence in Harrisburg  You go to any committee meeting, related to drilling, you see representatives from American Petroleum Institute, you see lobbyists from Range Resources,” Vitali says. “They’re just always here.”

The oil and gas industry has spent heavily on campaign donations and lobbying in Pennsylvania since the state’s natural gas boom began. An investigation by the Allegheny Front and 90.5 WESA found the industry spent $34 million on lobbying since 2007. This concerns Vitali, a suburban Philadelphia Democrat and frequent critic of the drilling industry. Vitali thinks all this lobbying has weighted the way the legislature approaches gas drilling.

“The most current example, frustrating example, is a very reasonable bill by Garth Everett,” Vitali says.

House Bill 1684, sponsored by Republican State Rep. Garth Everett, of Lycoming County would ensure that owners of mineral rights get a minimum of 12.5 percent of the royalties from the gas pulled from their land.

“What is happening now is, that some companies -- not all -- some are deducting post-production costs and really taking what they’re getting way down,” says Vitali.

In some cases, mineral owners are getting basically nothing in royalties. Despite public outcry over the issue, the bill has stalled.

Everett said the gas industry has lobbied against the bill, and some members of his own party are opposed to it. He says he’ll push for the bill’s passage this fall. “But I don’t have lobbyists,” he says. “I have a bunch of mineral owners.”

Many lobbyists ply their trade in the hallways of the state Capitol in Harrisburg. Chris Latta currently lobbies for a contractors’ trade group. But three years ago, he was a lobbyist for several oil and gas companies, including Shell, with the Harrisburg firm Long, Nyquist.

Like many lobbyists in Harrisburg, Latta used to work as a staffer in the state legislature. But after marathon sessions putting together state budgets, he wanted to see his kids more often.

With lobbying he says, “the hours were better, the money better and I saw my family more.”

Latta now uses his knowledge of the Capitol’s many unwritten rules to help clients get their message to lawmakers. With gas drilling, he says, he told legislators that if they squeezed the industry too hard, it would leave. He told legislators that from the oil companies’ point of view, there was only so much money they had to invest.

“(They’d say) ‘We’re going to invest it somewhere—and if we can’t make money investing it in Pennsylvania, we’ll invest it in Texas, or the Dakotas.’ It wasn’t anything against Pennsylvania,...but this is how it works,” Latta says. “You hope people understand...this is the reality of oil and gas business.”

The message appears to have gotten through. Pennsylvania remains the only major gas-producing state without a severance tax on the gas that comes out of the ground, though it did implement a somewhat smaller, per-well fee on the industry in Act 13.

For Representative Vitali, several failed attempts to raise a severance tax are good examples of how both lobbying and campaign contributions work. In addition to hiring lobbyists like Latta, oil and gas companies gave more than $8 million in campaign contributions between 2007 and 2012, according to the non-partisan government watch dog group Common Cause. That includes more than $1.6 million to the campaign of Gov. Tom Corbett, who opposed the severance tax. The industry primarily gave to Republicans, but Democrats benefited too. Vitali says, this issue goes beyond gas drilling and affects both parties.

This year's election is no different. Energy companies have given over $648,000 to Gov. Corbett's campaign and over $343,000 to his challenger, Tom Wolf.

“When either caucus—the Democrats or Republicans make calculations on positions to take on bills and amendments…Regrettably campaign contributions are factored into it,” he says.

Other lobbyists aren’t so sure of the effect of campaign money and lobbying on legislation.

“I can’t see in most cases a contribution to a legislators’ campaign being translated into a vote,” says Elam Herr, of the Pennsylvania State Association of Township Supervisors. Herr spent months lobbying the legislature to get more money from the impact fee allocated to towns impacted by drilling. “I do think It may help open the door to get a meeting with ‘em, and listen to ‘em.”

Herr’s township group doesn’t give campaign donations, and he says he has no problem getting meetings with lawmakers.

James Browning of Common Cause says the problem isn’t that lawmakers are selling their vote for dinners with lobbyists or a campaign donation. He says, it’s more subtle than that.

That’s not how Drew Crompton sees it (shown above. Photo: Reid R. Frazier). Crompton is chief of staff for Senate President Joe Scarnati, whose home district is a hot spot for Marcellus Shale drilling. The senator’s received more than $280,000 in campaign donations from the oil and gas industry. But Crompton, says those donations have little bearing on how Scarnati votes or what lobbyists he meets with.

“I don’t care what they give in campaign contributions,” he says. “I don’t know what they give, I don’t check [campaign donation] sheets. I don’t look at amounts. That’s irrelevant to me.”

If his boss sides with the gas industry on an issue, he says, it’s not because of a donation, but because he thinks what the industry brings is good for the people who sent him to Harrisburg.

“I understand the suggestion that big campaign contributions buys votes or buys influence,” Crompton says. “A lot of people who’ve never given a nickel to the senator or to I think the Republican Party have influence in this process, and that’s the way it should be.”