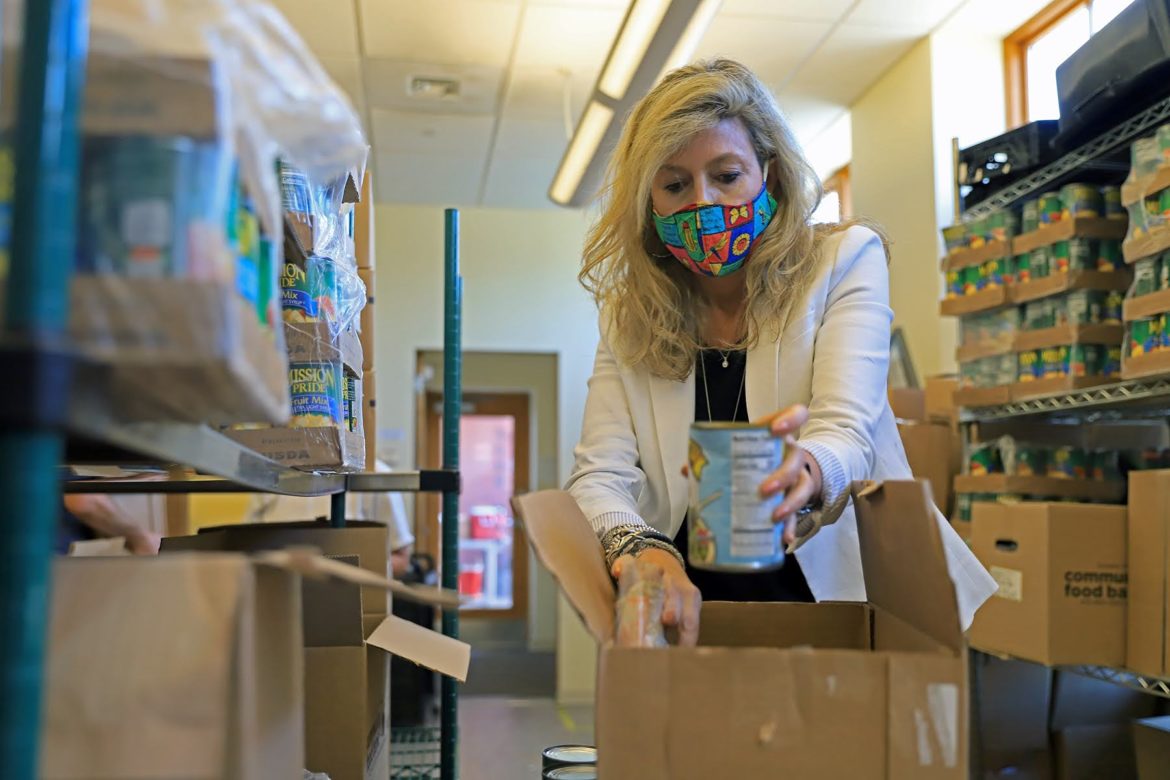 Carole Bailey, president and CEO of the East End Cooperative Ministry, prepares a box in the organization's food pantry. (Photo by Jay Manning/PublicSource)

When stay-at-home orders were enacted in late March, many people experiencing homelessness had nowhere to go. Shelters around the city saw increases in demand and have had to adapt to this new reality, taking measures to limit the spread of COVID-19, keep residents occupied and help people living on the streets.

These new conditions have had an impact on residents’ mental health and, combined with heightened demand, have increased shelters’ operating costs.

PublicSource spoke with representatives from four shelters and food pantries in the Pittsburgh area about the trends they are noticing and what has changed in the past four months.

“At this point, shelter beds are in very high demand. Typically, as the warm weather approaches, that need declines, but we are actually seeing an increase,” wrote Leah Dietrich, the director of residential programs at City Mission, a homeless shelter in Washington county.

As demand for shelter and food pantry services have risen, so have costs.

“We've tripled the amount of people we are serving,” Carole Bailey said of the East End Cooperative Ministry, a food pantry and homeless shelter located in East Liberty. “And we expect that to continue for the next year because people are not going to be able to get back up on their feet quickly.”

East End Cooperative Ministry typically serves 30 families a day in its food pantry, which is open in the mornings and afternoons every weekday. "Since COVID struck, we’ve started seeing 90 to 100 families a day," said Bailey, who serves as the organization's president and CEO. The soup kitchen, where they serve lunch, used to serve about 110 to 130 meals. “Between the end of March and the end of April, it skyrocketed. Now we're serving over 200 meals every day,” she said in late June.

Safety measures such as the use of plastic plates and utensils for their food pantry, as well as the need to deeply sanitize everything, have also contributed to the increase in costs. Bailey said they have seen emergency funding become available from the government and private foundations.

She questions how stable funding sources will be in the future, saying that, “My concern is that as we go forward, tax revenues are down in states and cities and everyone starts really feeling the strain of this. We don't know what happens next year. Where'll the money come from?” 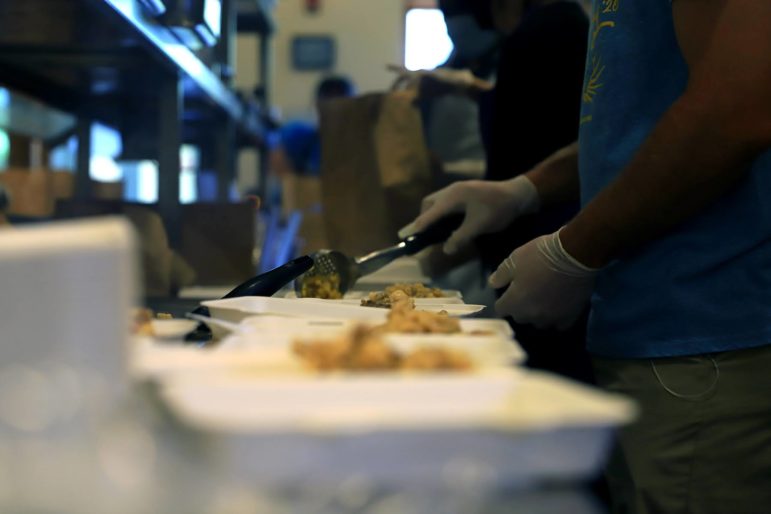 In late June, the East End Cooperative Ministry's soup kitchen was serving over 200 meals each day. (Photo by Jay Manning/PublicSource)

Wash your hands. Wear your mask. Let us take your temperature.

The frequent and new demands have taken a toll on some residents’ mental health. Some residents see the new rules as irritations, which has led to a greater number of self-discharges, according to Bailey.

Clients are used to having a lot of freedom, so staying inside and following stricter rules to reduce transmission risks has been challenging.

“We've been seeing a lot more people getting frustrated with each other and getting frustrated with us when we tell them that they can't do certain things because it's dangerous for the rest of the population within our facility,” Bailey said. “As time has gone on, we've had more and more trouble with their tempers flaring up as a result of being together all the time and not having the ability to just go out and go for a walk.”

Dr. Jim Withers is the founder and medical director of Operation Safety Net at Pittsburgh Mercy, a community health and wellness provider in Southwestern Pennsylvania. He said that he expects the adaptations that many shelters have made, such as safety precautions, use of telemedicine and increased supply distribution to continue for the foreseeable future. Cases continue to rise, and Withers expects restrictions to continue.

“We will adapt as always,” he said.

Because it can be safer to avoid seeing health professionals in person, the use of telemedicine has grown. Withers wrote in an email to PublicSource that telemedicine allows people who have been excluded from regular care to get support, and also makes it possible for specialists to bring in their expertise virtually. Dietrich agrees that it has many benefits, saying that “providers are seeing a decrease in no-shows for appointments and individuals are more open when they are in their own environment versus in an office.”

Withers said he has promoted telemedicine for a long time, but has not had the resources to extend it into street work. He said he hopes the current use of telemedicine will continue past the pandemic. Dietrich, too, said she believes many people will continue to use telehealth services because of the ease of access. 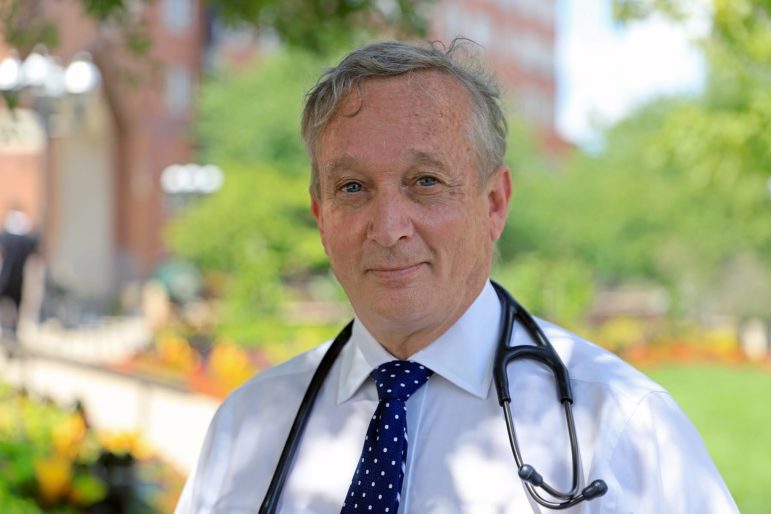 Dr. Jim Withers is the founder and medical director of Operation Safety Net at Pittsburgh Mercy. (Photo by Jay Manning/PublicSource)

The East End Cooperative Ministry’s food pantry has been moved outside and is now a “grab-and-go” model.

Even in the “green phase,” Bailey said protective measures are still in place. “We decided to monitor case increases and the rising cases have caused us to continue to keep curbside and hand-out service in order to protect our residents and staff,” she wrote in an email to PublicSource.

In the long term, the East End Cooperative Ministry does want to move people back inside when possible, but the limited seating in its dining room makes physical distancing a challenge. They’re planning to be able to “bring people into the building and have them go into the lobby and then walk through the pantry and grab their box.” But, they’re waiting for a steady decrease in COVID cases to consider transitioning.

Another challenge shelters are facing is the need to keep clients occupied during the day. Before the pandemic, most would be around for the nighttime only, but now clients are being encouraged to stay inside and staff have had to be creative with activities.

“Our residents have shared their talents and interests with one another and coordinated on-campus activities. We have had cookouts, tie-dye events and craft nights for the kids,” Dietrich said.

The public’s attitude toward the homeless may be shifting. “Most people in the community seem to be thinking and having empathy,” Withers said, “but some folks naturally look at the homeless as more dangerous, more infectious for some reason, more a source of disease.”

He has heard of colleagues who have been ostracized by friends and family because of their contact with people experiencing homelessness.

Withers has also seen a change in people's generosity. “Some people said if they ask for money, they're getting a larger amount,” he said. But, “the general kindness of people is really temporary, and it looks like [it’s caused] by fear.”

At the Light of Life shelter, Director of Programs Sherry Rorison said they have seen an increase in the individual donor base, although there was a shortage of volunteers to work their food pantry especially at the beginning of the shutdown.

Running these Pittsburgh-area shelters during a pandemic has highlighted many challenges, but there is some good to be seen.

Withers compared it to a freezing winter in 1993. “The collaboration that we've seen is taking this to a whole new level. In 1993, we had 11 nights that were minus 20. And we created the first winter shelter, and it brought people together. It brought the folks on the street together with us to make it work.”

“This is a little bit similar to that. It's a real stress test.”

Dietrich of City Mission agreed, comparing it to a fire that devastated the shelter in 2015.

“Many of our residents who were here in 2015 during the fire are still connected today, and in the same way, I believe this ‘graduating class’ will have that same connection. They went through something extremely challenging, and they are making it through together.”

Mitra Nourbakhsh is an intern at PublicSource. She can be reached at mitra@publicsource.org.