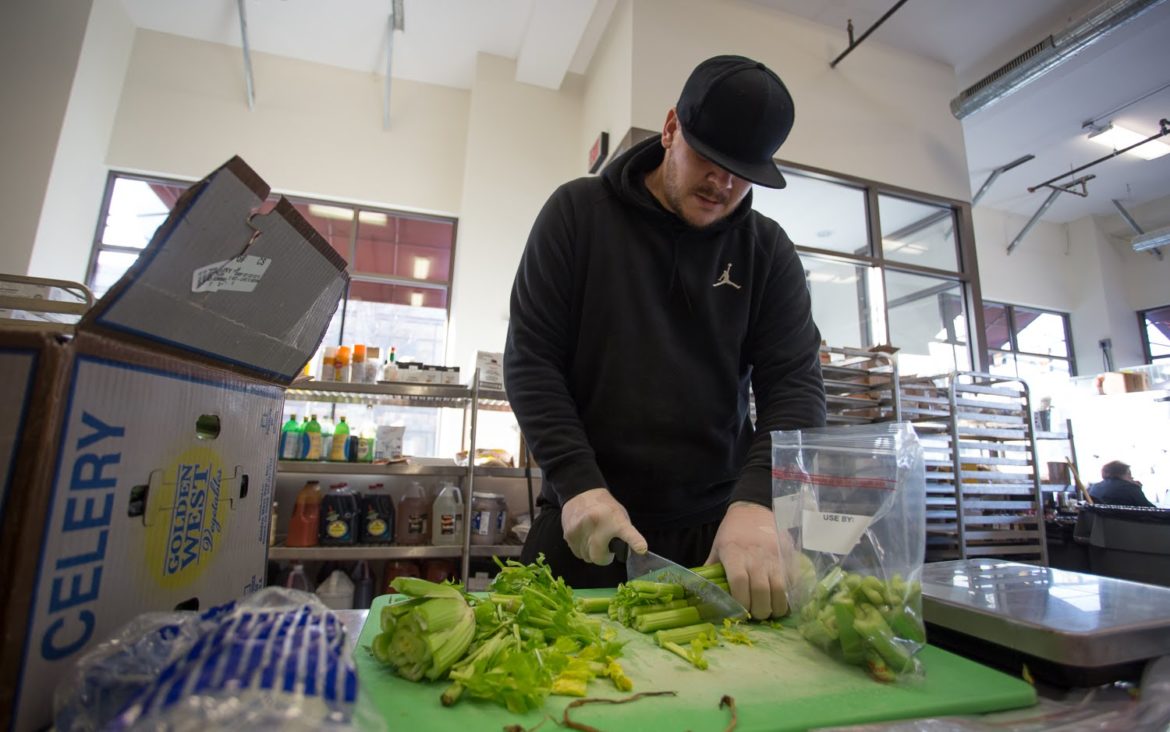 At Markeya Lowery’s last case management job, she filled a similar role to the one she has now — helping people address all the distractions and hardships that make going to school and holding down a steady job really difficult.

But her position at Community Kitchen Pittsburgh, she said, is much more delicious.

The daily menu at the facility in Hazelwood sometimes sounds like what you might expect from a fine dining experience — peach-braised chicken, Vietnamese summer rolls, garlic-charred Brussels sprouts — but most of its dishes aren’t for sale.

“You just never know what you’re going to get every day,” she said, “but that’s the exciting part of it all.”

Nearly one in seven Allegheny County residents are food insecure. It takes many organizations working in tandem to get them the help they need. As part of a food access series produced in partnership with PublicSource, 90.5 WESA's Megan Harris explores how they work together.

Adult students in their culinary training program turn bought products and fresh produce salvaged by other hunger relief organizations into about 2,000 meals a day for local schools, shelters and treatment centers at no cost to the hungry. While learning about knife skills and emulsion blenders, participants also work with Lowery and career services coordinator Robert Massey, who try to steel them for their next job.

The kitchen is something of a middle ground in Pittsburgh’s anti-hunger community, in that it both serves and receives donated food. And it can thrive this way, advocates said, because for almost 40 years the city has been on the forefront of addressing food insecurity.

Ken Regal, executive director of Just Harvest, an anti-hunger advocacy organization in the South Side, said Pittsburgh has a long history of recognizing the politics and policy implications of hunger and poverty.

He pointed to 1978 founding of the Jubilee Soup Kitchen, followed two years later by the Pittsburgh Community Food Bank, which grew throughout the city’s economic downturn and the closure of several area steel mills in the 1980s.

“I really didn’t have a clue what was going to happen,” Joyce Rothermel said of the era. She co-founded both nonprofits and celebrated the since-renamed Greater Pittsburgh Community Food Bank’s achievements with a small crowd in 2011. “We had just been through the worst devastation,” she told them, “but out of that time, came a growing network of food assistance providers.”

Today that network includes, by some measures, up to 400 soup kitchens, pantries, programs, schools, institutions, nonprofits, churches, corporations and others that work together to feed Pittsburgh’s most poor.

Just Harvest estimated in 2017 that nearly 174,000, or about one in seven, of Allegheny County’s 1.2 million residents were facing food insecurity, meaning there wasn’t enough food in the household for every person to lead a healthy, active life. That could include a shortage of food, reduced quality or disrupted feeding patterns, according to the U.S. Department of Agriculture.

In its latest Hunger in America survey, the food bank reported serving more than double that, or about 359,800 unique clients every year. Of those, 77 percent described themselves as food insecure, though some who self-identified as food secure also rely on charitable donations and government assistance.

The list of local partners and resources is so long that Rochelle Jackson said she sometimes has a hard time keeping track.

“I’ve been doing this for 17 to 18 years, and it blows my mind,” said Jackson, Femisphere project director with the Women and Girls Foundation. “Some of them are new, right? New projects where different organizations have gotten funding to launch, but it’s amazing to me that even with all the information I have and the knowledge of what kind of resources we have in the community, there are still resources out there that I know nothing about.”

Like Regal, Jackson has spent a career exploring the many manifestations of poverty in Pittsburgh. Through the Femisphere initiative, she takes a gendered approach, targeting a variety of ways providers could better help single mothers and their children.

It’s slow-going through the research phase, but she gets a good bird’s eye view on the city. As a sector, she said, the groups working to address food insecurity are among the city’s best at communication and collaboration.

The universal nature of need

Most workdays, representatives of several local organizations can be found filling up a few tables at the Pittsburgh Food Policy Council on Bedford Avenue in the Lower Hill, where floor-to-ceiling windows overlook the bustling backside of Pittsburgh’s Downtown.

“It feels like a lot of people who are excited, who are concerned, who are serious,” said Dana Harris-Yates, who attended a February meeting with the Black Urban Gardeners and Farmers Cooperative. “When I step in that room… we’re of one accord.” 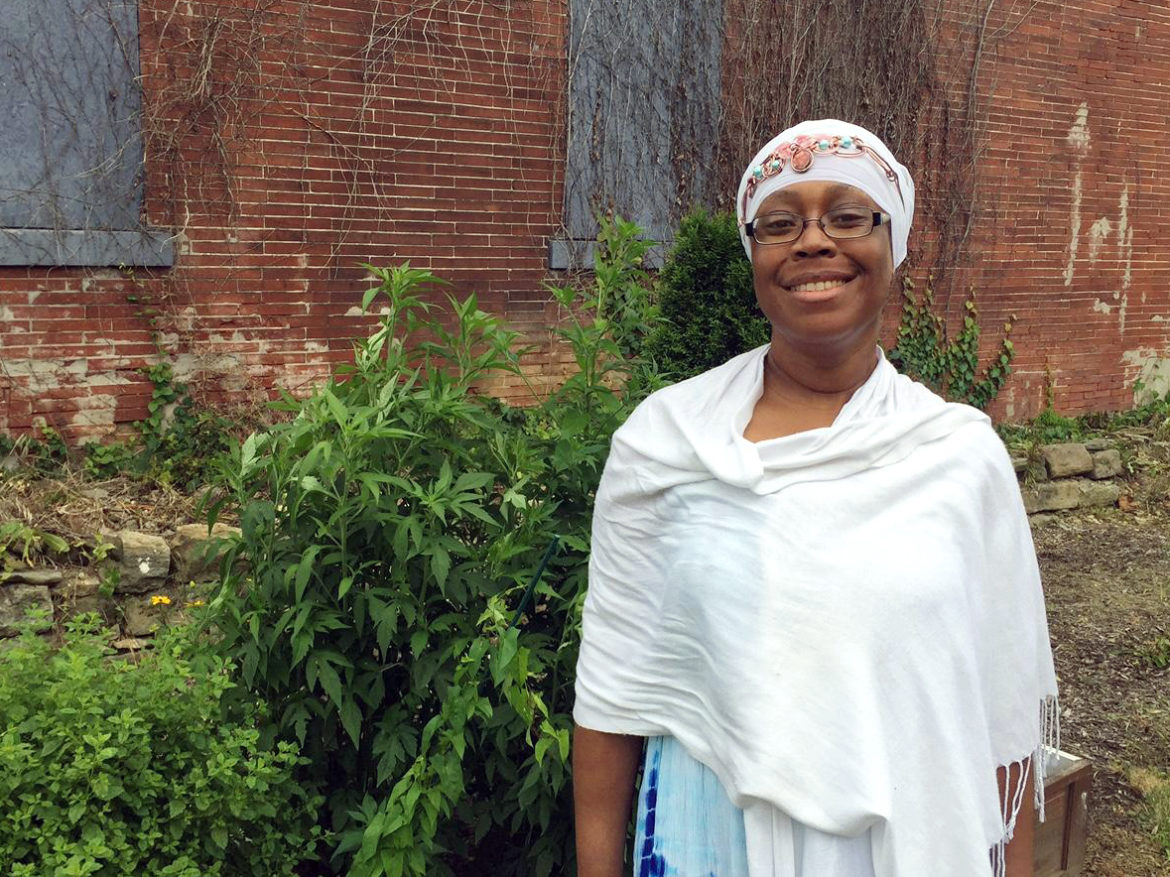 For Harris-Yates, food and food access were second nature, but for many in the Pittsburgh area, that isn’t the case. Urban gardening requires land access, resources and time, which she’s borrowed a lot of from fellow members of policy council.

Its executive director, Dawn Plummer, said the council was founded to be a collaborative advisory organization – a convener. Decision-makers, policy wonks, university program managers, farmers, buyers and volunteers all have a voice in these walls, she said.

Rebecca Bykoski, program manager at Sustainable Pittsburgh, usually attends as part of a new economic roundtable, but said she’s borrowed tons of ideas from the council’s hive mind. Sometimes, that’s meant cementing partnerships to pursue a one-off event or grant funding. Others, it was as simple as saying hello.

“It's very unlikely that I ever hear a no, you know? Most things are usually yes,” Bykoski said.  “Whether it’s businesses, whether it’s other organizations, whether it’s corporations – we operate in a very collaborative nature.”

That isn’t all to their credit, Jackson said, because the feeling of hunger is identifiable and concrete. Maybe a donor or volunteer hasn’t ever experienced true poverty or pondered the effects of blight on a neighborhood, but a few times a day, they do feel hungry, which can make food access an easier sell.

“Anybody can go in their pantry and pull out a couple cans of corn or soup and donate that to a cause,” she said. “It doesn’t always have to be a check.”

Contributing to the whole

Gordon Hodnett oversees a community garden on the corner lot at Gearing Avenue and Freeland Street in partnership with Larimer-based land reclamation group GTECH Strategies. When he took over in 2013, he planted natural "sweet treats” like berries and melons along the nearby bus stop, plus herbs and a smattering of vegetables, such as squash, broccoli, peppers, greens, tomatoes and more.

Some of his biggest helpers include kids mandated to perform community service.

“They love the corn,” he said. “They can see it growing tall, and it feels like a real farm, you know? And they wanted to be a part of that.”

Hodnett recently attended a “Green for Growing” food policy council funding party at Spirit in Lawrenceville to look into bees and other upgrades for the property. He compared it to mycelia, the network of fine white fibers in the earth that spawn mushrooms above ground. Without the insight and interconnectedness of others, he said, the garden and all the good it’s done teaching neighborhood kids about healthy food would not have happened. 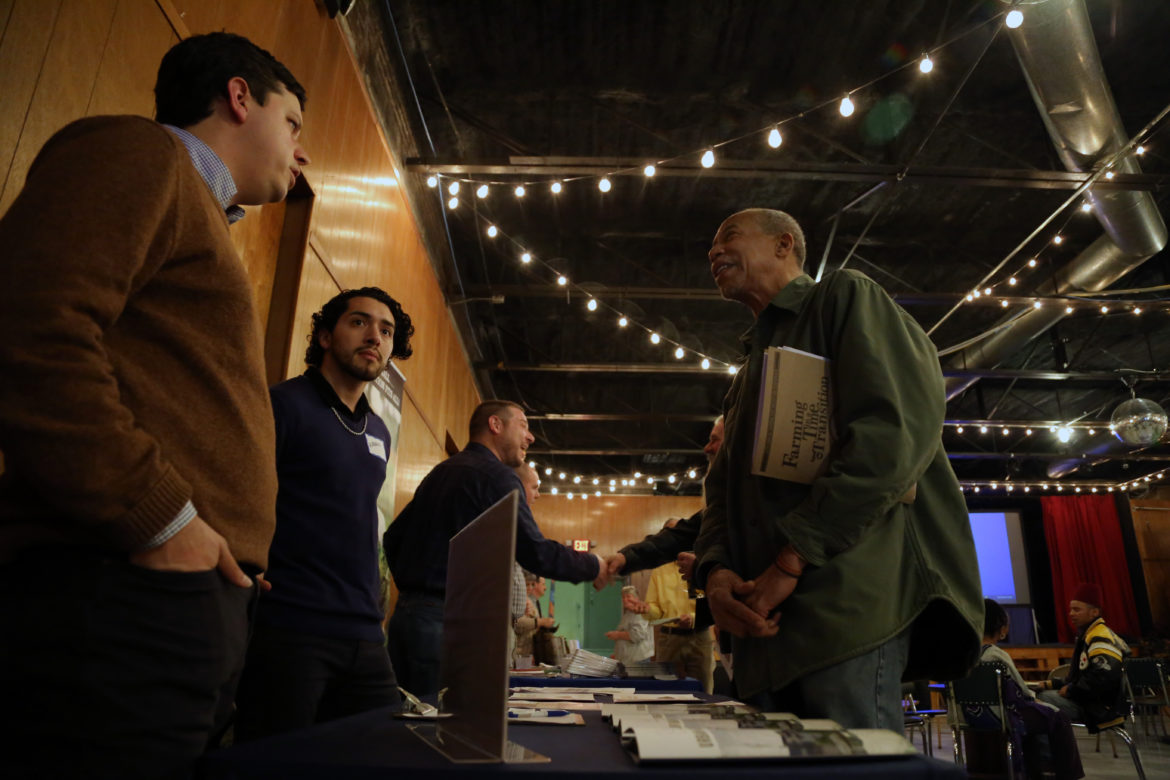 Urban gardener Gordon Hodnett, 52, of Manchester, (right) chats with service organizations about resources that could help support his corner plot at Gearing Avenue and Freeland Street in Beltzhoover. The discussion took place at Spirit in Lawrenceville on Tuesday, Feb. 13, 2018. (Photo by Megan Harris/90.5 WESA)

This is why advocates say Pittsburgh needs its ecosystem of organizations addressing poverty from all angles. Some have limited resources and provide a very specific service – an open pantry every other Tuesday or a free speaker series to talk about good nutrition – but they all contribute to the whole, Regal said.

“And I think as long as we collectively have that outward and forward looking mindset, we're moving in the right direction,” he said.

Which isn’t to say the battle is won.

Even with thousands of people working and volunteering toward eradicating hunger, organizations estimate charity still only reaches about 4 percent of local people in need, and many more improvements to existing systems and policies are needed to make a dent.

City leaders and institutions seem to understand many of these issues, Regal said, but the average Pittsburgher may not.

“The next step relies on all of us treating people in poverty with individual dignity,” he said. And that will likely require more jobs, higher wages, better mass transit and public education, and policies that address inequity and racial justice.

It’s all doable, Regal said. Pittsburgh is setting the stage.

90.5 WESA reporter Megan Harris can be reached at mharris@wesa.fm.