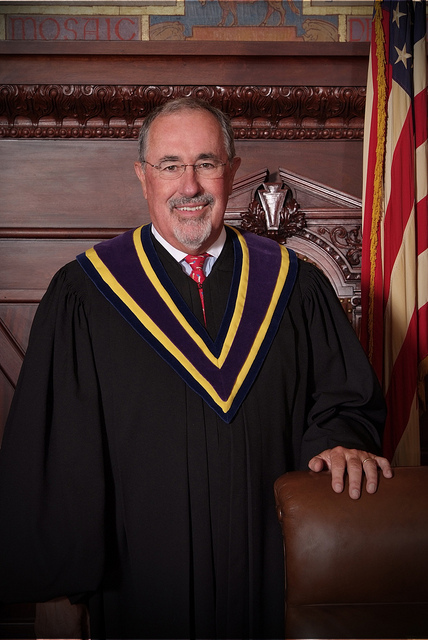 Just about every kind of racist, sexist and inappropriate email was found in the private inbox of Pennsylvania Supreme Court Justice J. Michael Eakin, according to new records obtained by the Philadelphia Daily News.

Roughly a year after pornographic and other unseemly emails brought down Pennsylvania Supreme Court Justice Seamus McCaffery, Eakin may now be in similarly hot water.

McCaffery, according to Eakin, had previously threatened to release inappropriate emails that Eakin sent or received from a private email address at Yahoo.com under the name “John Smith.”

At the time, however, only three inappropriate Eakin emails surfaced, with two depicting topless women and the third mocking a photo of black teens, according to a previous Daily News story.

According to the new Daily News story, the newspaper submitted a records requests for the Eakin emails, which was denied by the Pennsylvania Attorney General’s office, and then received the emails described in the story from an anonymous source.

The emails provide a glimpse of the off-the-record communication among lawyers, judges and others in the Pennsylvania criminal-justice system.

Senior Deputy Attorney General Jeffrey Baxter in 2009 sent Eakin and two other people an email with a video of a black woman lamenting that President Obama wanted to create new jobs.

"New jobs?" she asks. "What, you mean I'm not going to get my government check?"

The emails, while obviously inappropriate, could be in violation of the state’s Code of Judicial Conduct.

Lawrence Fox, a Philadelphia lawyer and supervising lawyer for the Ethics Bureau at Yale Law School, said the emails are troubling.

"If they're having this kind of relationship where they're sharing material that might prove very embarrassing, it reflects a very close relationship in some way," Fox said. "We don't send private jokes to anybody. We send them to our inner circle."

The Pennsylvania Supreme Court currently has three vacancies out of seven seats. McCaffery retired because of the email scandal; Justice Joan Orie Melvin resigned because she used her Superior Court staffers to work on her campaigns; and Justice Correale Stevens was defeated in this year’s Republican primary.

There are seven candidates for those three seats in next month’s election. PublicSource will provide coverage leading up to the race, starting Tuesday, Oct. 13.