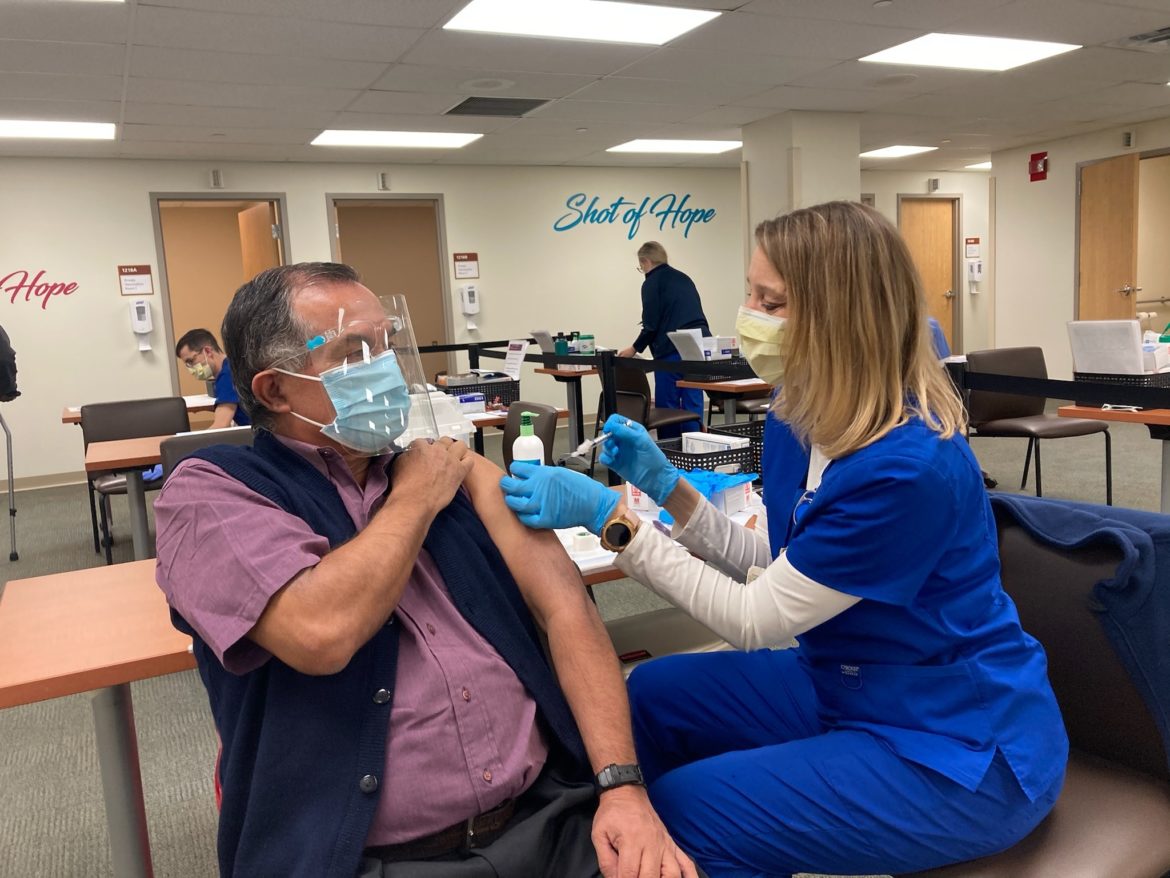 Allegheny County Health Department reported 288 new COVID-19 cases and nine new deaths Friday. The high number of deaths is due to the delayed import of data from the state's Electronic Deaths Reporting system.

Among the deaths reported on Friday, three were from December, one was from January, three from February, and two in March. Five deaths were associated with long-term care facilities.

To date, Allegheny County Health Department has reported 77,803 cases, 1,697 deaths from the virus and 5,142  past and present hospitalizations.

Gov. Tom Wolf announced Wednesday that Pennsylvania will administer its doses of the newly FDA-approved one-dose Johnson & Johnson COVID-19 vaccine to public and private school staff as a priority in an effort to more quickly reopen schools .

“Getting students back into classrooms is a priority for our COVID task force,” Wolf said in a Wednesday press briefing. “We all know that in-person education is absolutely important for students, and we all want to give our students the tools they need to succeed.”

In the new vaccine’s first week of distribution, the federal government will distribute 94,600 doses directly to Pennsylvania and 30,000 to CVS pharmacies in the state. Wolf said all of the more than 120,000 doses will go to teachers and other public and private school staff such as janitors and bus drivers.

Gov. Wolf signed a bill Wednesday preparing the Pennsylvania National Guard to assist with vaccination in the state. The Pennsylvania Emergency Management Agency and the education and health departments will work with 28 Intermediate Units to assist in vaccinating school staff members.

Because the J&J vaccine requires only one dose as opposed to the two-dose Pfizer and Moderna vaccines, states will soon be able to administer vaccine doses much more efficiently.

While the J&J vaccine has been shown to be somewhat less effective at preventing transmission of the virus than the other two vaccines, it is highly effective at preventing hospitalization and death. In addition to it being easier to administer, Wolf said he doesn’t believe anyone should feel like they’re getting a worse vaccine.

“There might be a slightly higher risk that you can get some sickness, feel some sickness because of COVID-19, but it’s 100% effective from keeping that disease from becoming more serious,” Wolf said.

By targeting these new vaccine doses to school staff, the Wolf administration hopes to make it safer for schools to reopen as soon as possible. In addition to educational consequences, Wolf said closed schools have also meant some children lack access to the warm meals and social interaction they became accustomed to at school.

The J&J vaccine has caused some controversy among Catholic groups across the country, including The Catholic Diocese of Pittsburgh, due to its use of what the diocese referred to as "aborted human fetal tissue in the current manufacture of the vaccine." The J &J vaccine was developed with the use of a fetal cell line that originated in an 18-week-old fetus aborted in 1985.

Agreeing with the U.S. Conference of Catholic Bishops’ Committee on Doctrine and Committee on Pro-Life Activities, which put out a statement, the diocese asked Catholics to choose, if possible, the Pfizer or Moderna vaccines instead of the J&J because of moral opposition to abortion.

Since members of the public do not have a say in which vaccine they get, public health officials say that everyone should take a vaccine as soon as whichever vaccine becomes available to them.

Allegheny County Executive Rich Fitzgerald affirmed the Wolf administration’s plans to use the J&J vaccine when asked during a Wednesday press briefing about the Catholic Dioceses of Pittsburgh’s statement.

“Everyone’s going to have to make decisions about how they want to get the vaccine,” Fitzgerald said.

This week, the average portion of tests coming back positive is 5.9%, up .4% from last week, according to Bogen. Additionally, the daily average of new cases is now 170, up 15 from last week. However, hospitalizations and deaths continue to decline.

“As I said last week, we are so close to being able to safely hold such events again, but not quite yet. Just a couple more months,” Bogen said. “If we aren’t careful, we will have another surge of cases, hospitalizations and deaths.”

The Pennsylvania Department of Health confirmed 2,757 new COVID-19 cases and 43 new deaths Friday, bringing the totals since the start of the pandemic to 944,196 cases and 24,262 deaths.

The Wolf administration also announced Wednesday that the Regional Congregate Care Assistance Teams [RCATs] program, which aids long-term care facilities, will not expire as planned Feb. 28 and will be available through May.

Pennsylvania started RCATs at the beginning of the year to attempt to approximate some of the support for long-term care facilities that the previous Regional Response Health Collaborative [RRHC] program provided. The RRHC program depended on federal funding that lapsed at the end of 2020.

Changes in mitigation efforts include maximum occupancy levels for indoor venues for up to 15%, and 20% for outdoor venues. "The 20% of maximum occupancy is permitted only if attendees and workers are able to comply with the 6-foot physical distancing requirement," the governor's office announced.

“Pennsylvania is taking a measured approach to revising or lifting mitigation orders,” Gov. Wolf said. “The reason we are seeing cases drop can be attributed, in part, to people following the mitigation efforts we have in place. Mask-wearing, social distancing and hand hygiene are making a difference and need to continue even as we see more and more people fully vaccinated. We need to balance protecting public health with leading the state to a robust economic recovery. We are lifting mitigation efforts only when we believe it is safe to do so.”

Vaccine allocation in Pennsylvania is increasing as more mass vaccination clinics in areas including Pittsburgh open up through Allegheny County Health Network and Giant Eagle. As of last week, 40,000 extra doses were allocated to the state. Bad weather had caused vaccination delays.

The state has updated its guidance on vaccination and COVID-19 exposure to align with the Centers for Disease Control and Prevention. Under the guidance, fully vaccinated individuals who are within three months of getting their final vaccine dose do not need to quarantine if exposed to COVID-19, so long as they are asymptomatic.

Starting next week, the YourTurn tool, which allows people to receive updates about their vaccine eligibility, will be available in multiple languages including Spanish, Chinese and German.

The ACHD shared details on Feb. 24 about its administration of the COVID-19 vaccine, including demographic information regarding recipients’ race, gender and age.

Of the vaccine Pennsylvania allocates to Allegheny County, about 10% goes to ACHD, with the rest going to providers like hospitals. ACHD then administers those vaccines itself, according to its director, Dr. Debra Bogen. Since Jan. 4, ACHD has injected about 22,000 first doses of the Moderna vaccine. The demographic breakdown:

“Based on these data, the health department has vaccinated at rates consistent with demographic representation in the county,” Bogen said. “I wish I could provide that level of data for the entire [vaccine distribution throughout the] county, but I do not have access to the data at this time.”

ACHD has noticed no drop in the demand for the vaccine.

“People are ready and want it, and we’re very excited by that,” Bogen said.

The Food and Drug Administration endorsed a third COVID-19 vaccine, from Johnson & Johnson, on Wednesday. Bogen said she did not know when the Johnson & Johnson vaccine might become available locally. “I hope that within a couple of weeks we may see doses here, but I have no knowledge of that at this point.”

The state attorney general's office announced on Feb. 25 that the former administrator of the Mount Lebanon Rehabilitation and Wellness Center, a sister home to Brighton, has been indicted on federal charges.

The indictment comes as the state and U.S attorney general continue their investigation into allegations that from 2018 to 2020 Susan Gilbert directed employees to falsify records so the facility could meet federal and state staffing requirements.

Gilbert is now being charged with conspiracy to defraud the United States, health care fraud, and obstruction of a federal audit.

“These crimes put facility residents at risk by only providing a dangerously low amount of nursing staff just before COVID began to surge across the country,” said Pennsylvania Attorney General Josh Shapiro. “By filing these false reports, the facility met minimum staffing levels only on paper, while Pennsylvanians who depended on them to care for their well-being didn’t have enough people to turn to.”

The indictment alleges that Gilbert directed staff members to “clock in” for shifts but not actually work in order to create falsified timecard documentation, which made it seem as though the centers staff was providing direct resident care even when they were not in the building. Staff were also given bonuses to “clock in” for these shifts.