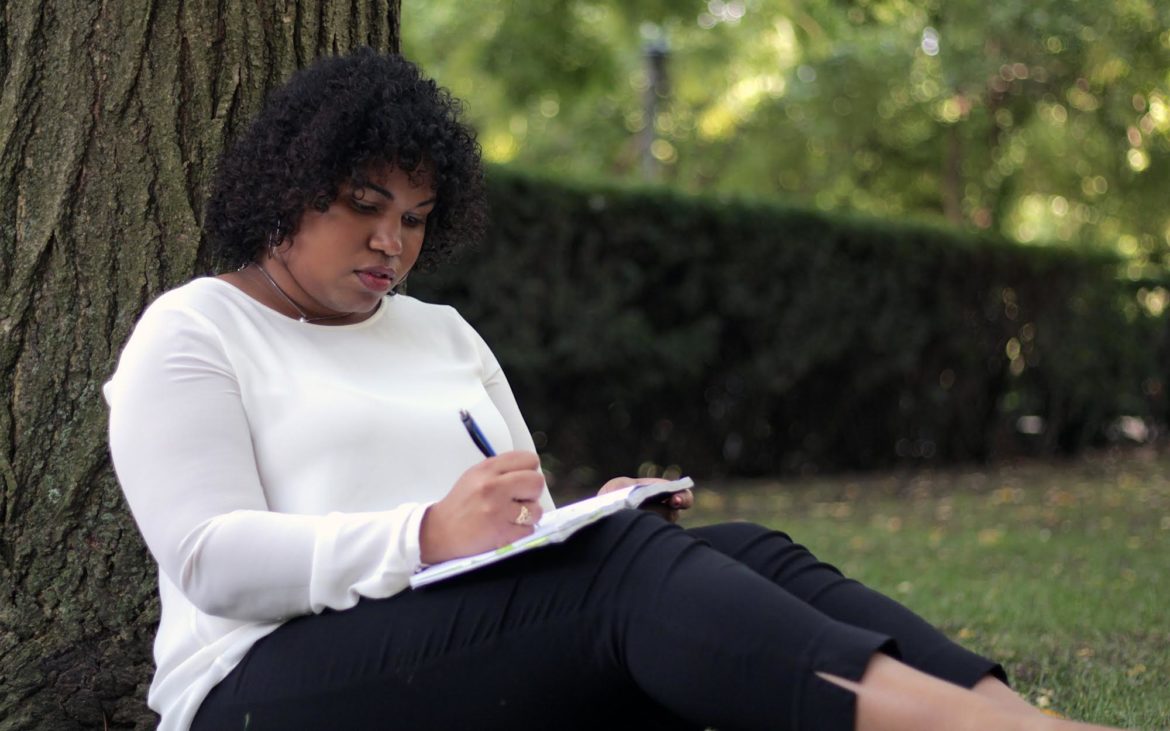 Patrice Alaquiva takes notes under a tree outside of the Cathedral of Learning. (Photo by Jay Manning/PublicSource)

When I was 6 years old, I sat cross-legged in my grandmother’s living room. My hands framed my face as I hung onto her every word. She told a story highlighting horrific ways human beings treated each other, and she described juxtaposed realities of the people who lived in the same town. I thought it was the next installment in a series of fables she was telling. I never fathomed that one day I would understand it on a personal level and live to tell my children a slightly different version.

She was describing our hometown: Pittsburgh.

In the past two weeks, white Pittsburghers have been enlightened and even felt aghast after seeing statistics and charts about Pittsburgh’s inequality and disparity in the Gender Equity Commission’s report on gender and race. For Black residents, particularly Black women, none of this information was new. This city absolutely sucks for us in every single factor imaginable. Now, we just have the stats to support what we already knew. I dare you to find a Black female Pittsburgher, whether homegrown or transplanted, shocked by this report. We’re out here living it.

The irony is the fact that my ancestors moved here from the Deep South to give their children and bloodline a better life. Yet, according to the report, we would have more opportunity and literally healthier lives by moving anywhere, including to the cities that they moved from.

At age 8, I was told by my friend — a white female classmate — that the idea of me ever becoming president was hilarious because the White House is for white people. At age 10, a new white female teacher questioned the authenticity of a report I wrote due to the “advanced vocabulary.” She assumed I couldn’t possibly write so well without ever asking other teachers or comparing it to my past work, which was easily accessible. At age 12, friends lost it when I beat them and the majority of my white classmates to land the lead in the coveted middle school musical.

While my white female peers relished their childhood, worrying about boys and Beanie Babies, I worried about how to navigate a city and world where I was always going to be viewed and treated differently — regardless of my manners, training and intellect — simply because I possessed more melanin.

Even at this young age, I started to make sense of all of the stories told by the women in my family. Whether it was a racial slur thrown toward them while walking down an aisle in the grocery store or the hurt they felt when a less-qualified white peer received a promotion because they were simply a better “fit,” I  took it all in. Part of me thought, “This sounds horrible, but I’m relieved because I will never experience such things by the time I reach adulthood. I’m growing up in a different time.”

I was hopeful that my reality would be different; I was naïve to think it could be.

I’m a third-generation Black female living in this nightmare. It looks like institutional racism, sexism and ageism in the workplace. It looks like me being held up as the poster child for “diversity” and then publicly ostracized when I needed justice for speaking out about my lived experiences as a Black woman working in a majority-white institution. It’s not being taken seriously by multiple medical professionals on multiple occasions. And it’s being referred to the police for trying to address a workplace matter.

So why not just move? It’s far more complex than that, not only for me, but for many Black female Pittsburghers. I don’t love living here but this is my home and, as we approach the year 2020, I don’t believe that I should have to flee my home or any other city in America to have fair employment, education, health care, housing and overall quality of life.

The equity report suggested that many of the disparities were due to “stereotypes of Black women” and “systemic exclusion.” If we don’t work on changing those stereotypes and beliefs, attempts to address the disparities are pointless.

The race problem is the American problem. As long as there is an America, there will be a race problem, which means there will be inequality. But that doesn’t mean we can’t try to make it better. Imagine what we could achieve if only we all gave the same amount of effort to focusing on inequality as we do with sports and anything black and gold.

Patrice Alaquiva is an educator and writer in the city. She is an alumna of Sacred Heart, Winchester Thurston, and The University of Chicago.