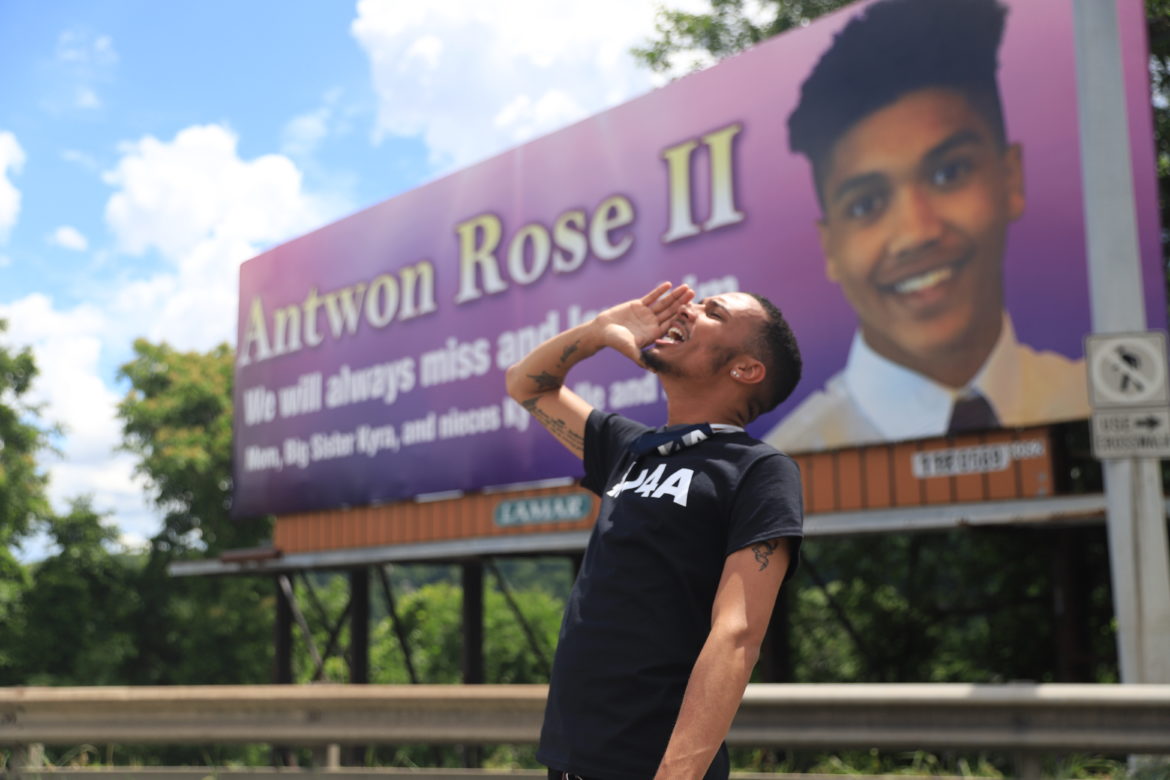 On Friday morning, roughly 50 purple and white balloons filled the East Pittsburgh sky to honor the memory of Antwon Rose II. Two years ago on this day, the unarmed Black teenager was shot and killed by a white East Pittsburgh police officer as he fled a traffic stop.

The crowd of a few hundred people at the balloon release fell quiet. A solo drummer’s beat marked the tribute.

Not only is it the tragic day Rose was killed, but it’s also Juneteenth, a national celebration of the end of slavery. Specifically, Juneteenth honors the day in 1865 that enslaved African-Americans in Galveston, Texas, learned of their freedom, two years after the Emancipation Proclamation. 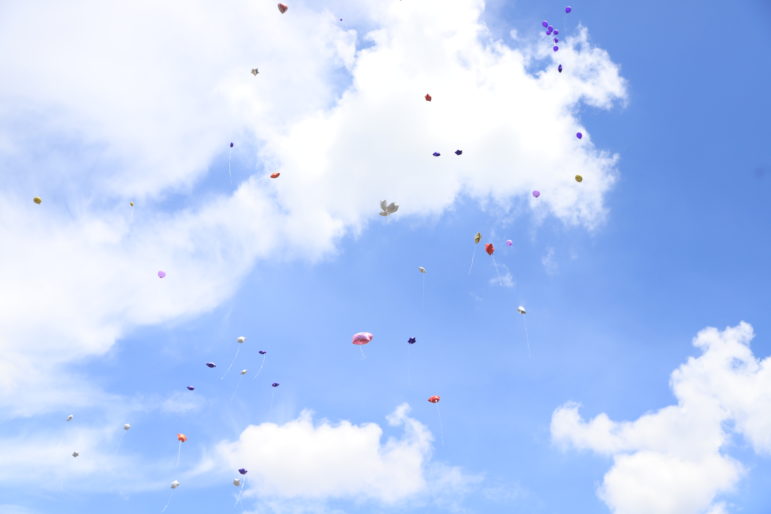 Balloons released into the East Pittsburgh sky to commemorate the memory of Antwon Rose II, who was killed by an East Pittsburgh police officer on June 19, 2018. (Photo by Jay Manning/PublicSource)

The gravity of the day is intensified by the ongoing national conversation prompted by the killing of George Floyd and other Black Americans at the hands of police.

It is the 21st day of rallies, marches, protests and other demonstrations in Pittsburgh.

At the event, Kenney announced the creation of the Antwon Rose II Foundation to “help underprivileged kids do some of the things that Antwon was able to do,” like travel and play sports. 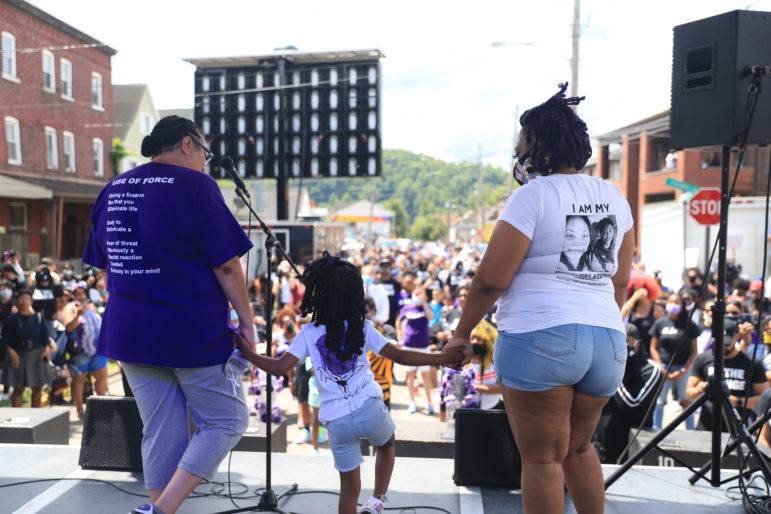 Antwon Rose II's mother, Michelle Kenney, spoke at the June 19, 2020, event about her son, alongside her daughter and granddaughter. (Photo by Jay Manning/PublicSource)

When state Rep. Ed Gainey took the microphone, he asked for support for House Bill 1664 to amend the state’s use-of-force laws. Gainey and state Rep. Summer Lee introduced the bill.

Lee tweeted that the bill “would allow police to use deadly force ONLY in those situations where they or another face IMMINENT threat of death or serious bodily injury. ‘Effectuating an arrest’ is not a good enough reason to end a life.”

The officer who shot Rose, Michael Rosfeld, was charged with homicide for which he was acquitted in March 2019. Rose’s death and Rosfeld’s subsequent acquittal rocked the region and drew national media attention.

Gainey called on those in attendance at the tribute to keep the momentum beyond events like Friday’s.

“The reality is, this is nice,” he said, ‘but come November, can we change protests into the voting test?”

“Body-worn cameras are known to protect both the public and police by providing unfiltered checks on community-police interactions," Peduto said in the statement. "Pittsburgh and other cities in the Commonwealth must be given the flexibility to quickly release such footage in designated situations in compliance with applicable law.” 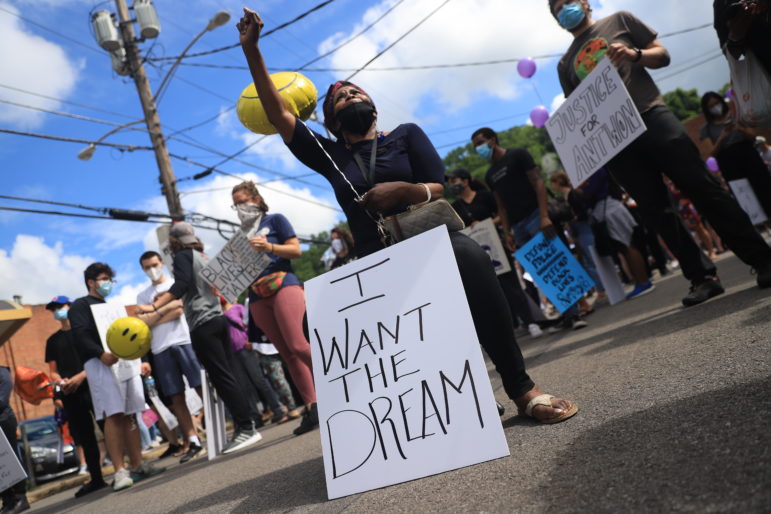 Back at the East Pittsburgh event, which featured several musical, dance and poetry performances by local artists, Kahlil Darden, the 19-year-old CEO of YBMKQ, spoke about why they helped to organize the remembrance. “For us, it’s to let people know that we’re never going to stop fighting for Antwon,” he said.

Kenney thanked people for continuing to reach out to her about her son and shared that sometimes those messages come when she is in tears and having a hard day. “A lot of days, I’m carried, and y’all don’t even know it,” she said.

She signaled that her voice would continue to be heard through this movement and beyond.

“Although Antwon is not here, I'm going to fight for him until the day that I die,” she said and then referenced that her daughter and granddaughter, present with her, would go on to “carry the torch."

Later in the afternoon, a Juneteenth march kicked off in Wilkinsburg with about 200 to 300 people. At the edge of Homewood and Wilkinsburg, people kneeled in silence for 8 minutes and 46 seconds to honor Floyd.

“Today is Juneteenth. It’s a day we celebrate liberation and freedom, but we have to reflect the times… and the times are we’re still fighting for freedom,” Miracle Jones of 1Hood Media said, noting police brutality and the unjust killing of Black people. 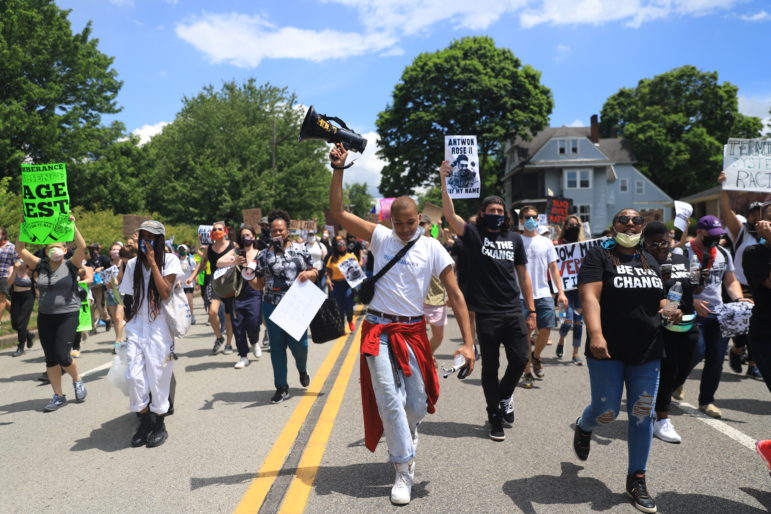 Participants, led by community organizer Christian Carter (center), at a Juneteenth march that began in Wilkinsburg on June 19, 2020. (Photo by Jay Manning/PublicSource)

The demands include shifting money from policing to community improvement, reducing incarceration that disproportionately hurts Black communities, removing police from schools and demilitarizing law enforcement. Representatives of the activist groups said they were giving the mayor and executive a week to respond, which would put their deadline to commit on Monday, June 22.

At the front of the march was the family of Romir Talley, who was shot and killed by Wilkinsburg police in December 2019. Talley’s second cousin, Dana Denson, said the family doesn’t even know the name of the police officer who fatally shot him.

“We want answers,” Denson said, “we want someone to be held accountable.” 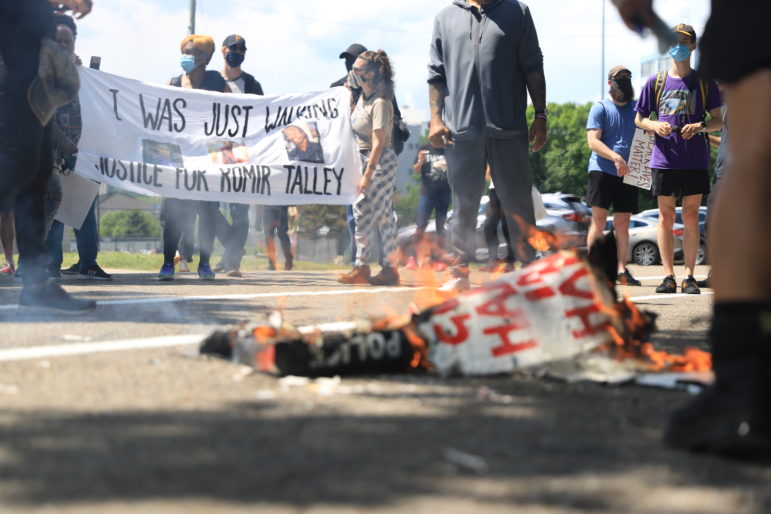 Participants of a Juneteenth march knocked down and burnt pinatas referencing police brutality and racism. In the background, a sign calls for, "Justice for Romir Talley." (Photo by Jay Manning/PublicSource)

At Mellon Park, the event’s final destination, organizers hung two piñatas — one that said “Kops and Klan go hand in hand” and another in the shape of a police car — from a tree. Christian Carter, a member of the Allegheny County Black Activist/Organizer Collective, hit them to the ground before organizers set them on fire.

Local artists created the piñatas and two colorful altars that were showcased at the front of the march. The four sides of the altars represented joy, rest, rage and earth, said Mia Sterbini, one of the artists behind the project. “It’s really about what liberation looks like here, and envisioning that world now,” she said.

Fellow artist Christina Acuna Castillo agreed. “These are a visual representation of the magic and power that Black organizers share with the world,” they said.