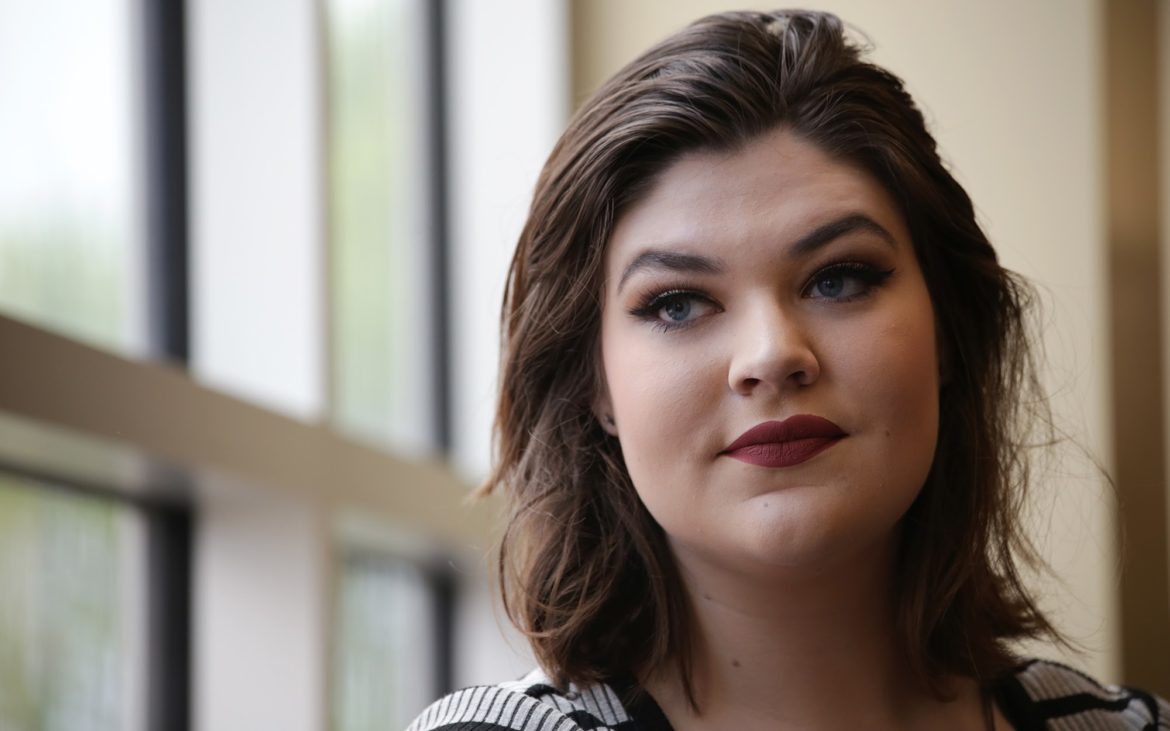 Taylore Nacey, a 20-year old sophomore at Carlow University, gets $5,800 a year in Pell Grants to attend school. Without it? “I honestly don’t know If I could attend college,” Nacey said. (Photo by Ryan Loew/PublicSource)

As a member of student government at Carlow University, Taylore Nacey is used to being made “very aware” of when people are unhappy.

But she realizes she can’t fix everything. One evening about a month ago, Nacey’s phone started ringing off the hook. Students were leaving frantic messages about President Donald Trump’s proposed 2018 federal budget — and how it aims to cut the funding that got them to college.

“Hey, is this a real thing? Is this going to happen?” students questioned Nacey.

Described as a “budget blueprint to make America great again,” the proposal strips $3.9 billion from federal Pell Grants, which are debt-free federal assistance to needy students.

The budget also cuts a $732 million in Federal Supplemental Educational Opportunity Grants, which is money given to schools by the federal government. The schools distribute this money to the most needy students who need aid beyond the Pell Grant.

The budget also promised to reduce federal work study “significantly” — but did not indicate how much it would slash. The program provide part-time jobs to students with financial need to help them pay for living expenses — like food or school supplies.

The proposed cuts would have a widespread impact on the Three Rivers region: 32,865 students at 28 institutions of higher education in the Pittsburgh area received $111 million in Pell Grants, according to the most recently available federal data from the 2014-15 school year. The federal government’s budget for 2018 is due Oct. 1. “Almost everyone I know is on financial aid,” said Nacey, a 20-year-old sophomore psychology major at Carlow. According to data from the federal government, about half of Carlow’s undergraduates receive Pell Grants.

Nacey is, too. She receives $5,800 a year in Pell Grants — along with working 30 hours a week at retail store Hot Topic for a little more than minimum wage. Without the grant, “I would have to come up with $5,000 on my own.”

The cuts wouldn’t affect regular funding next year, but instead would take away from Pell’s reserves. The government pulls from the reserve fund when demand for Pell Grants is high. The Trump administration says the proposed cuts “leave the Pell program on sound footing for the next decade.”

But Jon Fansmith, director of government relations at the American Council on Education — a higher education association with nearly 1,800 members  — thinks the move is “shortsighted” and ignores “what we’ve seen over the last 10 years.”

So if the economy continues to improve, the cuts may matter less. But Fansmith is skeptical that the next decade will only be filled with new business and increasing pay checks.

Looking at the cuts, Natalie Wilson, Carlow University’s director of financial aid, said she feels there’s some irony in the proposal’s title as an “America First” budget.

“To be ‘America First’ economically and militarily, we have to have educated citizens who can participate in the economy and military at the level we need them to,” Wilson said.

Olivia Bennett is one of those Pell Grant recipients trying participate in the American dream. A business student at Carlow, she used to work at Comcast in customer service. But, after management passed over her for promotion after promotion, she traded IT for textbooks. Olivia Bennett is a student at Carlow University and a 38-year old single mom of four — including a daughter studying at Slippery Rock University in Butler County. Bennett will only pay back $300 in student loans because of Pell Grants and additional scholarships. Looking at the proposed cuts to Pell Grants, she said, “I thought that it was a little unjust.” (Photo by Ryan Loew/PublicSource)

“I started school basically because I needed a better outcome for myself and my family,” said Bennett, a 38-year-old single mother of four. After graduation, she’s heading into a combined business and law (MBA-JD) program and hopes to become a civil rights attorney.

Bennett, a North Side resident, receives $5,000 a year in Pell Grants and pays for nearly all of the rest of her tuition with scholarships — except for a $300 loan.

That $5,000 is near the top of the range for Pell Grant recipients. The awards depend on whether you are a full-time or part-time student, if the applicant is a dependent or independent of their parents, and how much the applicant or his or her family makes.

Jamie Hightower-Poindexter, executive director of central financial aid at the Community College of Allegheny County, said she is concerned about how changes could affect students at different places in their lives . For instance, while a single mom’s need for the full amount may seem clear, any cut could mean less food on the table or being unable to buy a needed textbook.

“If other tiers of Pell are reduced, students would be impacted by having to secure student loans or tap into personal resources (if they have resources available) to supplement their tuition and cover living expenses,” Hightower-Poindexter wrote in an email.

According to government data, 40 percent of students at CCAC receive Pell Grants worth nearly $26 million spread across 8,600 students.

Sitting outside on CCAC’s main campus on the North Side, Robert King, a 34-year-old West Mifflin resident, is trying to decide if he should take the long bus ride home or go to panel on gun violence for extra credit. Robert King is a 34-year-old ex-mechanic studying to be a paralegal at the Community College of Allegheny County. While the aid he gets is “better than I thought it would be,” he thinks he’d be taking fewer classes — and working more — were it not for the Pell Grant he receives. (Photo by Stephen Caruso/PublicSource)

The former mechanic is attending school to become a paralegal because he’s seen too many of his buddies get hurt. He wants work that challenges “more with the head, less of the body.”

He receives about half of his money for school from the state and federal government — including Pell Grants. But even with the assistance, he notes the minor expenses that add up, like that bus ride — he estimates he spends $100 on fare every month. The textbooks really add up, too.

Overall, King isn’t sure what his college experience would look like without aid.

“I would still be doing it, but it would be more of a hardship,” he said.

He would have to work longer hours and drop some credits to afford school.

That’s the result Wilson, back at Carlow, fears from cuts to the grants. Momentum is key to finishing a degree, she said, especially for non-traditional learners like King.

“The more students slow down, the more likely they are to drop out,” Wilson said.

The students and administrators  need not worry yet. Trump’s budget doesn’t have a lot of traction in Congress. In Washington, D.C., Fansmith himself doesn’t think the proposed cuts nor Trump’s overall budget will go through “wholesale,” but he is concerned by the priority shift it shows.

By taking money “set out for the purpose of helping students” and transferring it for short-term gain, Fansmith says he fears “generational damage.”

That could end up being the case for Bennett — whose daughter, Raquel Betters, is attending Slippery Rock University in in Butler County and also receives a Pell Grant.

“I would probably be very directionless,” she said.