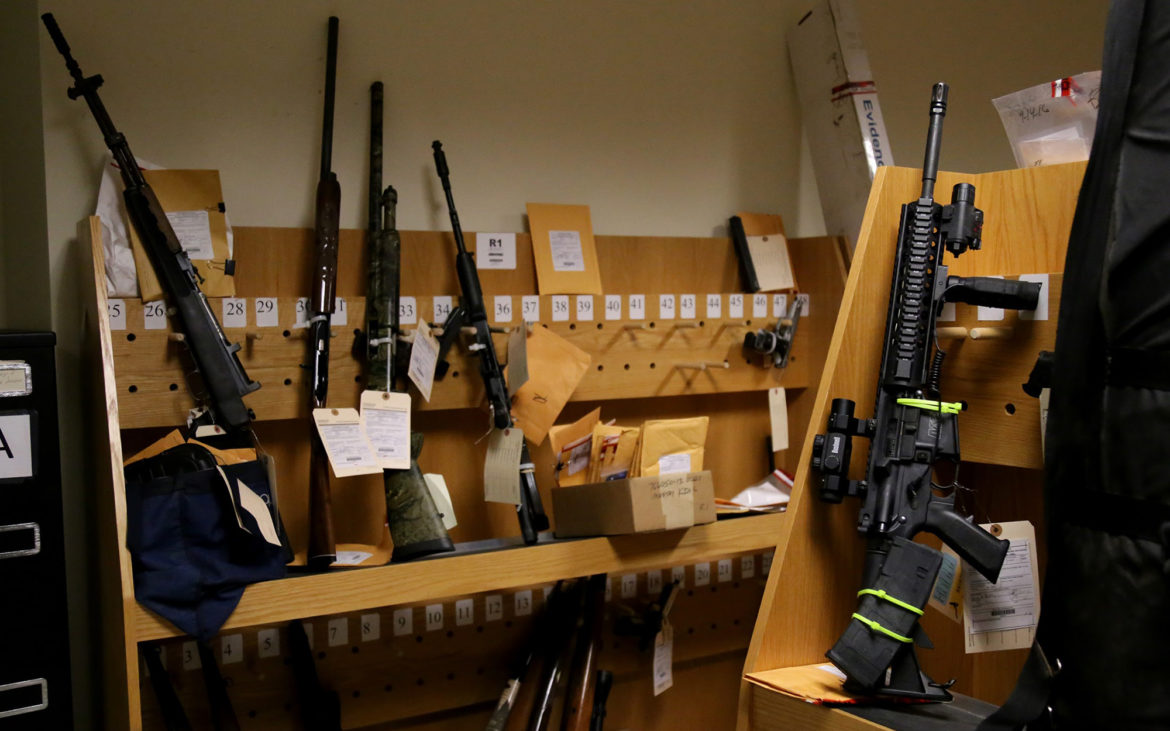 If firearms like these are lost or stolen, a Pittsburgh city ordinance requires their owners to inform police. These weapons are being held as evidence by the Bureau of Alcohol, Tobacco, Firearms and Explosives. (Photo by Guy Wathen/PublicSource)

If Joe the Pittsburgher parks near Heinz Field, enjoys a Steelers victory over Baltimore and returns to find his car looted and his handgun stolen from his glovebox, he’s required to tell police.

If Jim, a more criminally minded resident, sells guns illegally from his trunk, he has the same obligation to report when guns change hands — but, of course, he doesn’t.

Police might not catch him outright, but if they trace a weapon back to him, Jim can’t so easily shirk responsibility by saying the gun was stolen. If so, why didn’t he report it?

In reality though, the city can’t enforce its “lost and stolen” ordinance. The National Rifle Association has twice sued the city over its reporting requirement, calling it plainly illegal, and a renewed fight is brimming in Harrisburg as pro-gun lawmakers push legislation to block and punish action by cities like Pittsburgh. That support could override a governor’s veto, which Gov. Tom Wolf has promised to do.

How Pittsburgh’s “lost and stolen” ordinance is supposed to work (but doesn’t).

The city vows to stand firm, facing resistance from a likely majority of state lawmakers and an ongoing struggle that’s already left its ordinance in limbo for more than eight years.

So for now, criminal Jim can repeatedly sell illegal guns and tell law enforcement he has no idea how they ended up at crime scenes. Unless police come knocking, he has little reason to say the guns have left his hands — and if they do, saying they’re lost or stolen is an easy alibi.

On Pittsburgh’s streets, the fight is cast in terms of life and death. But in the statehouse, it’s a turf battle. One faction thinks cities like Pittsburgh, Philadelphia and Lancaster should be able to pass what they consider reasonable measures to reduce violence.

“To say that this is some huge restriction on the Second Amendment is absurd,” state Rep. Dan Frankel, D-Pittsburgh, said of reporting requirements.

But the larger, more conservative faction believes that cities have no authority to pass gun ordinances, including but by no means limited to lost and stolen reporting. To hammer the point home, they want to allow groups like the NRA special power to sue cities as if they were private citizens.

“When you have these communities doing this, they are openly defying the authority of the state. That is the biggest tragedy here,” said Kim Stolfer, president of Firearms Owners Against Crime, and one of the architects of the legislation.

The bills are mostly supported by Republicans, but Democrats like Pittsburgh Reps. Dom Costa and Harry Readshaw are co-sponsors of newest House bill to rebuke local governments.

Costa, who was shot in 2002 as a Pittsburgh police officer and later became chief, was not available to comment. Readshaw did not respond to a request for comment, nor did Rep. Mark Keller, a Perry County Republican, who is the bill’s main sponsor. The fight over gun regulation is escalating in Harrisburg. Lawmakers are pushing bills that target cities like Pittsburgh for their firearm ordinances. (Photo by Guy Wathen/PublicSource)

Sen. Wayne Langerholc Jr., R-Cambria County, prime sponsor of the Senate version of the bill, said the legislation also protects gun owners who might be burdened or confused by a patchwork of local rules.

Let’s say Pete drives to Pittsburgh from Johnstown in Cambria County. He packs his gun in his glove box for protection, but it turns up missing during his stay in Pittsburgh. If he realized the gun is gone but doesn’t report it, the city could fine him up to $500.

“It’s analogous to municipalities just going off on the their own and creating their own crimes code or tax code,” he said.

Both versions of the bill give standing to any gun owner in Pennsylvania to sue, even if they haven’t been harmed, and that same permission applies to groups like the NRA, who will also get their fees paid by cities if they prevail in court.

“Legislators who support this bill are putting a special interest group, the NRA, ahead of neighborhoods that are continually threatened by gun violence,” said Tim McNulty, spokesman for Pittsburgh Mayor Bill Peduto.

A study released in July 2016, looking at cases from 2008, found that nearly 80 percent of guns taken from perpetrators in the city that year were illegally held. More recently, area law enforcement agencies say they’ve seen ongoing trading of legally purchased and stolen guns for drugs, a consequence of the region’s worsening opioid epidemic.

In December 2008, Pittsburgh city council voted to require gun owners to report when they realize their guns are lost and stolen. McNulty called that a “common-sense” way to discourage illegal guns.

The NRA and four local members in April 2009 then sued the city of Pittsburgh, alleging that the city had no authority to pass a local gun ordinance. But in June 2010, the Commonwealth Court threw the suit out, ruling that the plaintiffs failed to demonstrate they’d been harmed by the statute. A similar lawsuit against Philadelphia met the same fate. Then, in 2014, state legislators changed the law. To fix the legal hurdle, the law authorizes individuals and groups like the NRA to sue cities over their gun ordinances even without evidence of harm.

Once more, the NRA sued Pittsburgh, along with Philadelphia and Lancaster, over their local gun rules. That suit died when the state law was thrown out on procedural grounds by the Pennsylvania Supreme Court. The legislation was passed improperly in a bill unrelated to firearms.

New standalone bills were filed near the end of the last legislative session but expired. Now they’ve been resurrected, and Stolfer expects one will pass with enough support to override a veto.

A spokesman for Gov. Tom Wolf said the governor opposes the bills and plans to veto if either reaches his desk. Frankel said he expects enough support to block an override.

Meanwhile, a bill that would make much of the argument moot is all but stalled.

For years, Democratic lawmakers have been fighting to make lost and stolen reporting a requirement statewide. That would scrap the fight between the state and local governments on this matter.

Rep. Madeleine Dean, D-Abington, said her lost and stolen bill is meant to give law enforcement a tool to use against traffickers by requiring gun owners to report lost or stolen firearms within 72 hours of the realization. Otherwise, they’ll face a fine of $500 or less.

“Punishment isn’t the point to me,” Dean said. “It’s the obligation and the fact that those who trade in illegal guns will know that Pennsylvania has drawn a line.”

“When you have these communities doing this, they are openly defying the authority of the state. That is the biggest tragedy here."

Stolfer, though, says lost and stolen rules are worthless.

“This is ‘pie in the sky’ nonsense,” he said, questioning the notion that it would do anything other than intimidate lawful gun owners.

Dean’s bill is unlikely to move, and without state protection, the burden falls on cities like Pittsburgh to either face off with the NRA or scrap their ordinances.

“This is about the thousands of guns that are trafficked illegally and ending up in the hands of 14-year-old kids,” Kraus said.

PublicSource Interactives & Design Editor Natasha Khan produced the graphics for this story. Several icons used in the graphics were from Iconfinder. Slight changes were made to icons.

4 thoughts on “How Pittsburgh’s effort to limit illegal firearms turned into a years-long, escalating gunfight”