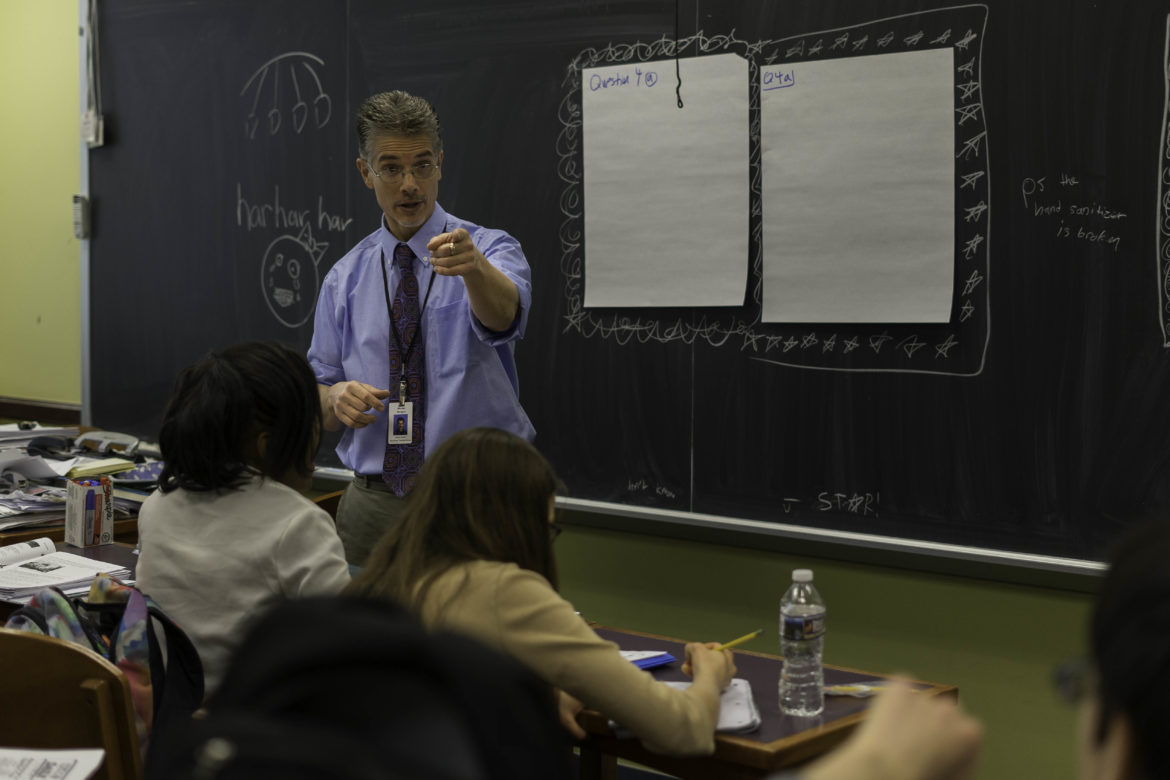 Michael Naragon, a history teacher at Winchester Thurston in Shadyside, teaches a class of ninth graders on Monday, Feb. 6, 2017. The lesson included a discussion on Cesar Chavez, a prominent labor organizer in the 1950s and 1960s. (Photo by Aaron Warnick/PublicSource)

When Michael Naragon explains complicated topics to his high school history classes, he likes to use a seemingly absurd phrase: “Consider the lobsters.”

The phrase is a reference to a famous essay-review penned by writer David Foster Wallace in the Gourmet magazine on the Maine Lobster Festival, where the sea creatures are cooked alive for the tastiest meals.

Wallace’s article looks at the ethical dilemma of eating the red crustaceans. But for Naragon’s ninth graders at Winchester Thurston, “consider the lobsters” is a challenge — to look at lesson topics from both perspectives, as the boiling lobster and as the hungry tourist.

As Naragon and other Pittsburgh social studies teachers like him navigate the new and controversial president, the ability to consider lobsters — to be critical and understanding of all sides of current events — helps classrooms adapt and adjust to an intense post-election reality.

And while teaching through the long, angry campaign and the first controversial days of Donald Trump’s presidency may be difficult, many teachers think it provides students with a stronger understanding of their country’s history — as well as lessons on how to live in a democracy. And some students, to their teachers’ delight, are rising to the occasion. Ian Frank, a ninth grader at Winchester Thurston, works on a class assignment Monday, Feb. 7, 2017, after a lesson on labor rights. (Photo by Aaron Warnick/PublicSource)

John Aguiar is a U.S. government teacher at Avonworth High School, a school of 417 students about 10 miles northwest of downtown Pittsburgh. He sees his role as similar to that of a journalist — to be nonpartisan and unbiased in his classroom. And like Naragon, he’ll often play devil’s advocate to help his students “think at a higher level.”

Aguiar has been teaching since 1998. In the school’s mock election a few months ago, the student body — solidly middle class and 92 percent white — elected Trump.

The school’s slant was on display the day after the election.

As Aguiar’s class rose to recite the Pledge of Allegiance the morning after Trump’s victory, a group of his female students who “were flat-out pissed” at the results refused to stand.

As a result, the ire of some of their classmates, who supported Trump, quickly fell on the group’s protest.

“They started basically screaming at one another,” Aguiar said.

While it was an emotional day for many, Aguiar knew that when the shouting began, he needed to remind everyone: “We’re all classmates. We’re all friends. We’re all Americans.”

The intense campaign and controversial first weeks of Trump have also drawn more students to politics. David Brown, a social studies teacher at Woodland Hills High School, teaches an elective current events course. Brown could tell that students were “very indifferent” about politics in the beginning of the year.

But after Trump took office and began using executive orders to implement his new policies, Brown’s pupils were “troubled.” As their concern grew, so did the level of participation in Brown’s class. A group of Winchester Thurston students discuss posters and newspaper articles from the country's labor movement. (Photo by Aaron Warnick/PublicSource)

The high levels of participation is breeding sometimes combative and emotional classrooms.

Naragon recalls one argument in which a student who supports Trump stood up during the middle of the conversation, tears rolling down his cheek.

The student thought nobody understood why he supported the former New York real estate magnate. It had nothing to do with Trump’s bombastic personality. It was his policies.

Dealing with students’ emotions is part of the job of teaching, said Naragon. Kids often have trouble separating their ideas from their identity — though Naragon, a 50-year-old from Mount Lebanon, admits plenty of adults have the same problem.

And if Trump’s colorful personality excited some students, the president’s platform, including issues such as immigration or the loss of factory jobs and trade, provided an opportunity to make dusty old stories of 1920s immigration laws and Populist protests in the 1890’s relatable to smartphone-wielding students.

“The great thing about an election year — teachers in my shoes salivate — we can make textbook material relevant.”

“The great thing about an election year — teachers in my shoes salivate — we can make textbook material relevant,” Aguiar said.

In response to Trump’s harsh rhetoric on immigrants and refugees, some students are not only taking in classroom lessons but also trying to make a difference in their schools. At Taylor Allderdice High School in Squirrel Hill, ninth grader Peyton Klein started Global Minds this fall to bridge gaps in understanding between students from different cultures.

Klein started her extracurricular group after watching an English as a Second Language student struggle to communicate with a teacher.

Global Minds now meets every Tuesday after school to let U.S.-born students mix with immigrants from around the world, where Klein and her fellow students learn to defy stereotypes with knowledge — like that “not everyone that wears a hijab is automatically from Syria.”

Armed with this awareness, Klein feels like she and her classmates are better equipped to face the president’s harsh words and executive orders regarding refugees and immigrants.

“The administration's words and actions have kind of created a divide between students and people of all different shapes, sizes, races,” Klein said. “It motivates me even more to use my voice and use my rights.” Sophia Scheatzle (left) and Anisa Callis are in ninth grade at Winchester Thurston. On Monday, Feb. 6, 2017, they were learning about civil rights and the labor movement. (Photo by Aaron Warnick/PublicSource)

Teaching his ninth graders about Cesar Chavez at Winchester Thurston, Naragon can’t help but be proud of the increased awareness he’s seen among the youth since the election. He looks at his students as models for how Americans should participate in their democracy.

“I think they’ve handled it the way I’ve wanted American citizens to handle it,” he said. “They've got things they value and they plan to pursue. For some that means supporting the president, and for some that means hitting the streets in downtown Pittsburgh. That’s all a teacher can ask for.”