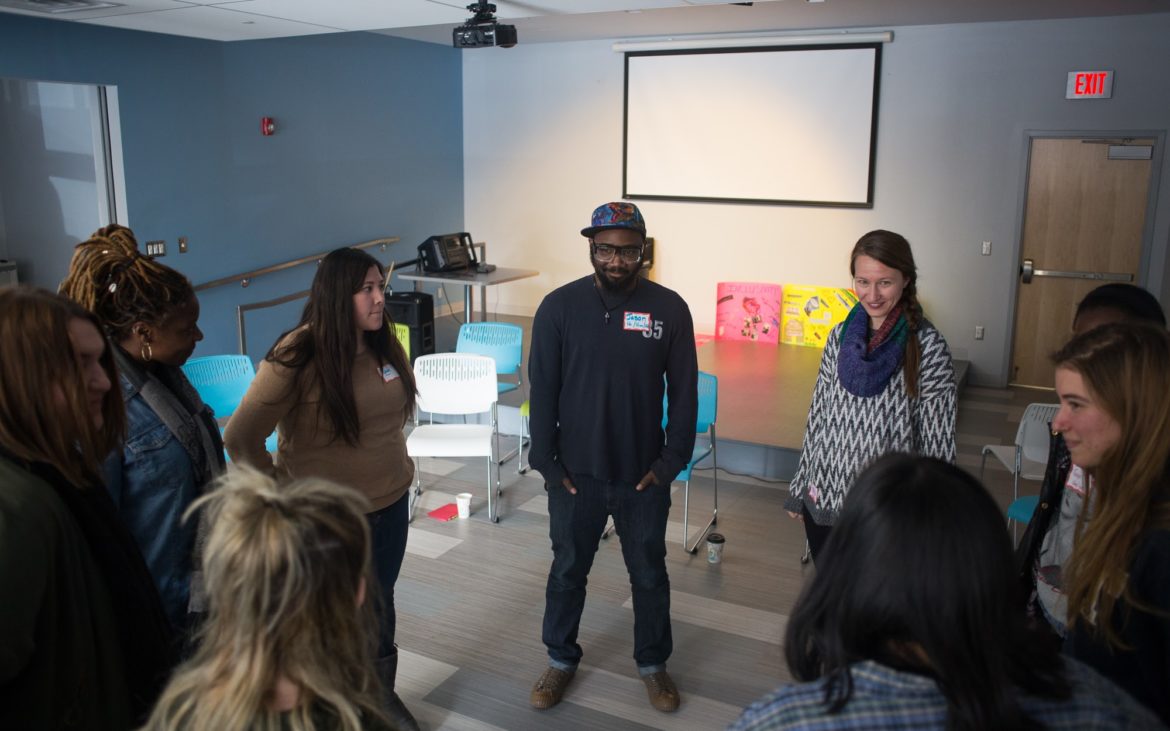 Jason McKoy, center, stands among Youth Undoing Institutional Racism organizers and attendees as they participate in a ice breaker between discussions. (Photo by John Hamilton/PublicSource)

After a recent family gathering, Jaiya Correll-Greene sat down to watch the Disney Channel with her sister.

The characters in the show were planning a party and one asked: “What will the theme of the party be?”

“Brown,” one of the other characters replied. “Because no one looks good in brown.”

Correll-Greene was struck. When she was a kid at camp, other kids had made fun of her dark skin. Why would anyone say that brown was ugly — clothes, skin or otherwise? Who would approve that dialogue for a children’s show? She teared up and quickly changed the channel, explaining to her sister that they didn’t need to watch things like that. For her, that moment was a clear example of how widespread — and institutional — racism and racist ideas have seeped into every aspect of culture in America.

Correll-Greene was one of about 20 students and adults who participated in a weekend workshop at the Homewood-Brushton YMCA to “undo institutional racism,” a tall order that involved self-reflection, education and challenging deep-seated ideas about society.

The premise of the weekend was succinct: Institutionalized racism has profoundly shaped life for every person living in the United States, especially people of color. It’s created power imbalances that have, both subtly and obviously, placed white people above people of color, socially, economically, culturally and emotionally.

It wasn’t hard for the participants of the Youth Undoing Institutional Racism training to connect incidents in their lives to the bigger picture. Some of the black students talked about specific instances from their lives — a comment about their kinky hair, a “you’re smarter than I thought you’d be” quip — that illustrate how society has long treated white beauty and intelligence as superior.

The American Friends Service Committee, in partnership with the People's Institute for Survival And Beyond, organized the training that sought to define institutional racism, show how it affects every part of American society and question why poor people tend to stay poor in spite of their wish and efforts to change their lives. Some sessions traced the history of racism and race, while others sought to illustrate how the school-to-prison pipeline harms young people of color more than their white peers.

Race prejudice plus institutional power equals racism — that’s the definition participants agreed on. The conversations boiled down like this: Even if hate or prejudice is seemingly absent from a personal interaction or other circumstance, white people have historically been able to shape governments, economies and culture while people of color have been repeatedly disenfranchised. Even if, say, a white loan officer is polite and kind to a person of color, financial systems in the United States — built and maintained by white people — make it harder for people of color to earn credit and take out loans. That makes the interaction inherently, if not explicitly, racist. White people have also created and dominated Congress, state legislatures and city councils. They’ve controlled what music, theater and other art is created and sold. They’ve created and maintained control of schools and the criminal justice system. In those roles, they’ve shaped policies and institutions that have harmed people of color.

Allderdice High School students Gia Gibson and Kyley Coleman participated in the training to put into context experiences they’ve had where they felt race played a role in being singled out by an authority figure or not having the same opportunities as their peers.

At times deeply personal, the weekend sessions were both raw and cathartic for the students and adults who participated. Jason McKoy, a small business owner, spoke of how he struggled with depression and survived a suicide attempt when he was younger. Participants discussed how black men in America are told they have to act ultra-masculine and aren’t allowed to express their emotions. On top of that, black communities tend to distrust psychiatric therapy because it was used to harm black people in the past.

“When I needed help, I was told, ‘Just go to church,’” he said. “When I brought up therapy, I was told, ‘No, black people don’t believe in therapy.”

But while the teens and adults were able to express, learn, reflect and make mistakes — all while building a conscious about how to fight institutional racism — the real work, facilitators said, happens this week and in the weeks that follow.

Felicia Lane-Savage, a yoga trainer and instructor who uses anti-racism principles in her studio, said it is vital for people to constantly reflect on how racist frameworks influence even the smallest aspects of daily life.

“It’s hard to try to end something when you don’t even know where you stand...and how you benefit from these systems,” she said.

Lane-Savage said she noticed a particular lack of reflection about racism in America the day after the 2016 presidential election. White women came into her yoga class crying because Donald Trump had been elected president, she said.

“I was like, what? White people have known [racism] is happening. So I declared a moratorium on white tears,” she said. “When you cry for me, that means I have to spend my time and energy and take care of you.”

Nisa Raz, a sophomore at the University of Pittsburgh and one of the attendees who was white, said she’s going to make an effort to spend more time each day reflecting on her own attitudes toward race and people of color and try to educate her white friends about how they are likely complicit in racist systems.

“I preach don’t be silent [about racism]; choosing silence is choosing the side of the oppressor. But I think I’m silent more often than not,” she said. “I think one of the most productive things you can do as a white person is try to understand [racism] and know you’ll never fully understand it.”

Correction (11/22/2017): A previous version of this article incorrectly stated the relation of the other person in the story shared by Jaiya Correll-Greene; wrongly attributed a thought to one person when it was a discussion among multiple participants; and used a photo that included a person who did not want to be photographed. The photo was removed.

Correction (12/4/2017): A previous version of this article included portions of personal stories that were not meant to be on the record. They have been removed from the story.