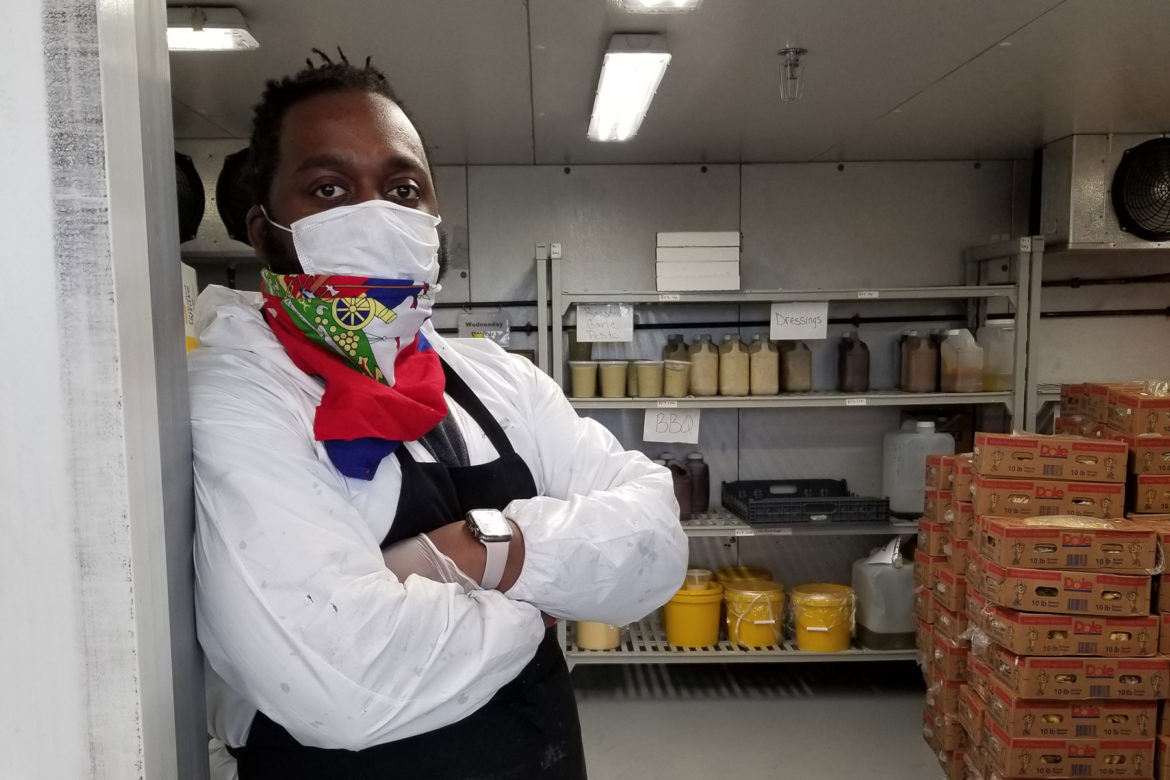 Chef Claudy Pierre of Arnold’s Tea at the Energy Innovation Center, where he is preparing food as part of the E.A.T. Initiative. (Courtesy photo)

Chef Claudy Pierre had planned for a busy St. Patrick’s Day at Arnold’s Tea on the North Side. Instead, as COVID-19 restrictions took hold, he closed his business and took the excess food he had stocked up on to help the community.

Pierre and his crew set up a food stand outside of his business to feed people between 3 and 7 p.m.

“We tried to stay open for a few weeks, but we just weren’t making enough to pay staff and keep the business open, but we could still feed people nutritious, flavorful meals with the E.A.T. Initiative,” Pierre said.

Thanks to $10,000 in grants from Bridgeway Capital and Neighborhood Allies, Pierre and his small team are feeding hundreds of Pittsburghers from Thursday to Sunday. Now, Pierre is cooking out of a full-service kitchen at the Energy Innovation Center in the Hill District with food provided by food banks and organizations like 412 Food Rescue.

It’s an honor to serve the community, Pierre said, but how long can it go on when he’s not taking a salary and he can barely pay his employees?

Talking to Black business owners in Pittsburgh in the wake of the COVID-19 quarantine, you hear a lot of the same things: They’ve applied for loans and have heard nothing back. They are scraping together every ounce of the money they have to pay their employees, do good by their community members and salvage what’s left from a business when it has no income.

Across the nation, we are hearing how COVID-19 is disproportionately affecting Black Americans’ health, but what about the Black economy?

Prior to COVID-19, Black-owned small businesses nationally increased in 2020 with much of the growth fueled by women, according to the 2020 trends report for Black entrepreneurs by Guidant Financial. However, the same report shows that most Black-business owners fund their businesses with cash, lines of credit, donations or loans from friends and family members. Only 3% of Black business owners are able to access funds through banking institutions. It appears that even a global pandemic and quarantine aren’t changing that.

Pierre at Arnold’s Tea is feeling the brunt of those statistics. He has applied for a federal Payroll Protection Program [PPP] loan, but has not heard anything. Currently, Arnold’s employees are primarily volunteering to keep the E.A.T. Initiative running.

Still, he’s optimistic and hoping to re-open the tea house on East Ohio Street in June.

Kelly Hunt, district director of Western Pennsylvania’s Small Business Administration [SBA] office, said business owners who’ve previously applied to the PPP should expect lenders to reach out to them in the next week or so about funds from the second stimulus package.

“The funds are supposed to be given out on a first-come, first-serve basis, so if you haven’t heard from your lender, you need to get on the phone and call them to ask why your loan has not been processed,” she said.

Hunt further advised minority-owned businesses to apply for PPP loans through online payment processors like PayPal, Square and Intuit, instead of large lenders.

LaShesia Holliday owns Naptural Beauty Supply, located in the Gallery on Penn in East Liberty. Her storefront closed once the quarantine was announced, and she’s scrambling to make ends meet.

She described business as “ebbing and flowing.”

Holliday’s former business model was based on foot traffic at her storefront and vending at local trade shows and events. Now, she’s entirely dependent on the 2% of sales that come from online purchases.

The Institute for Women’s Policy Research says that women of color are driving the growth among female business owners, growing nearly 13 times as quickly as white women-owned businesses. Their research also shows, despite rapid growth, women are less likely to be funded by financial institutions than men.

Holliday said that access to funding during COVID-19 will be vital to her shop’s continued success. 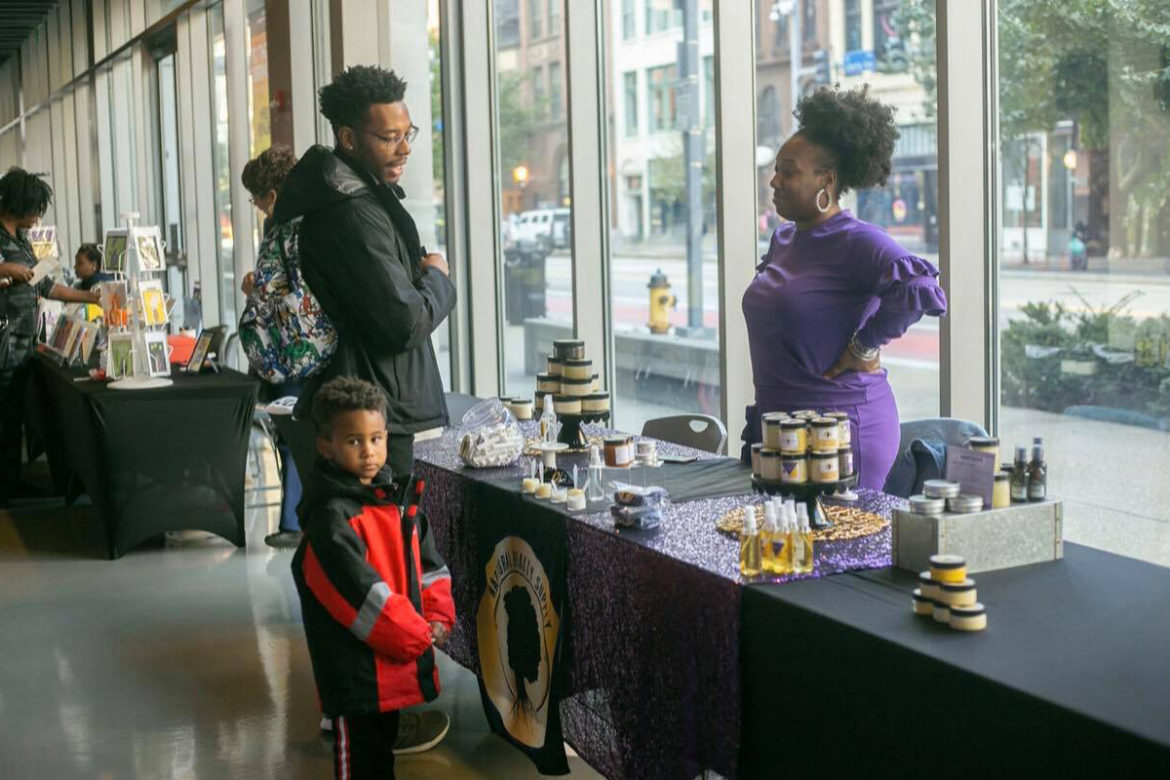 Holliday said the Pittsburgh Foundation was the first to approve her for a grant to cover business and household expenses. She’s received about $7,000 from a Micro-Enterprise COVID-19 Loan from the Urban Redevelopment Authority, though she applied for $15,000. And Holliday’s application for the SBA’s economic injury disaster loan [EIDL] was accepted and approved on May 1. She received the $1,000 advance from SBA to pay her sole employee, herself.

Hunt said every small business should be applying for, at minimum, the EIDL.

“Those applications that have been received by the SBA, but not funded through the first round of funding will be the first ones funded in the next round,” Hunt said.

Hunt also wants small business owners to know that if they receive an EIDL, the $1,000 advance payment per employee does not have to be repaid. The EIDL application is currently closed due to a backlog of applications. Hunt said she hopes the application will reopen within the next two weeks.

Still, one community leader is questioning the lending structure of relief payments.

Tammy Thompson, executive director of Circles Greater Pittsburgh, has been attempting to fill the void  lenders leave. The organization has been assisting entrepreneurs like Holliday by providing them with basic needs like food, cleaning supplies and, in some cases, laptops for families new to homeschooling. Circles also operates the Gallery on Penn, a retail incubator space in East Liberty, where Holliday’s storefront is located. Thompson is disheartened to see the devastating effect the pandemic has had on Black entrepreneurs.

“As a program that focuses on helping minority business owners, it was very discouraging to see that newer businesses with no employees yet and who don’t necessarily have the back-end support or a relationship with a banker seem to not have as strong of a chance to apply and get approved. This also includes a lot of ‘mom and pop’ businesses that have been in our communities for generations,” she said.

Of the second round of stimulus relief funds, $60 billion is supposed to be earmarked for community banks and smaller lenders that work with underserved communities.

The first round has led to multiple lawsuits against banks, including PNC Bank, alleging that the financial institutions favored big companies over small business in processing PPP loans.

“The Payroll Protection Program, you do have to apply for through a lender,” Hunt said. “That’s been an issue we recognize for our urban communities and our very rural communities.”

As a childcare center, McCoy’s Learning Center in Homewood doesn’t have the flexibility to  offer online services.

“How many businesses do you think have gotten the type of support that Ruth’s Chris has gotten?”

Owner Briana McCoy, 32, said she decided not to charge the families who pay out of their own pockets once the center had to close. “So I’m losing that funding, plus the parent’s copays as well as the food program,” she said. “That income is a big loss.”

Fortunately, the state is still paying McCoy for children enrolled through state-funded childcare subsidies. However, those payments are much lower than parents who pay privately. While McCoy knows the decision to not charge her private-pay parents during quarantine and to continue to pay her two employees puts her business at risk, she said she is committed to doing the right thing for her parents.

The center is set to reopen on May 11, but not without concerns. How will they handle changing masks of not only employees but also children? Will they have to turn away children with fevers? She’ll also be required to have additional back-up staffing to remain compliant with state child care policies.

And financial questions loom. McCoy said she applied for the PPP loan through her banking institution, Bank of America, on April 4 and received notice on May 1 that her application is being processed. She also applied for the SBA’s EIDL in mid-March and has not heard anything yet.

Many Black business owners in Atlanta, St. Louis and Chicago are reporting being locked out from stimulus relief loans.

The U.S. Black Chambers said it has been advocating for lenders that have a track record servicing Black-owned businesses to receive a portion of the funding since the first coronavirus relief bill was passed.

“The fight continues … we will continue to aggressively urge Congress, local and state legislators to target and set aside funding specifically for Black-owned businesses,” said Ron Busby, president of the U.S. Black Chambers in a recent statement.

The Black Chambers believes that Black-owned businesses are going to be among those most negatively affected by the economic downturn.

Vernard Alexander, 48, is the executive director of the Minority Networking Exchange and owner of the CKV Suites co-working space in Homewood. He is optimistic that Black entrepreneurs and leaders will make adjustments and pull together during the pandemic.

Alexander knows how the power of a robust online presence can make or break a business. His social media popularity as a disseminator of community information has led to a second income over the years. Alexander’s event space within CKV Suites, is currently shut down, but his robust online presence allows him to stay in business. He also works a day job as a social worker.

All of the local Black business owners who spoke to PublicSource agre ed on one thing: the available relief funds do not seem to be alleviating the area’s minority-owned businesses.

“How many businesses do you think have gotten the type of support that Ruth’s Chris has gotten?” Pierre said, referring to the $20 million the steakhouse chain received through the PPP and has since said it would return.

Holliday echoes that sentiment, saying she worries about paying all the loans back and whether or not spending will rebound when the quarantine is fully lifted.

“They're throwing all these loan funds at people,” she said, “and I’m worried it’s all going to blow up in our faces.”