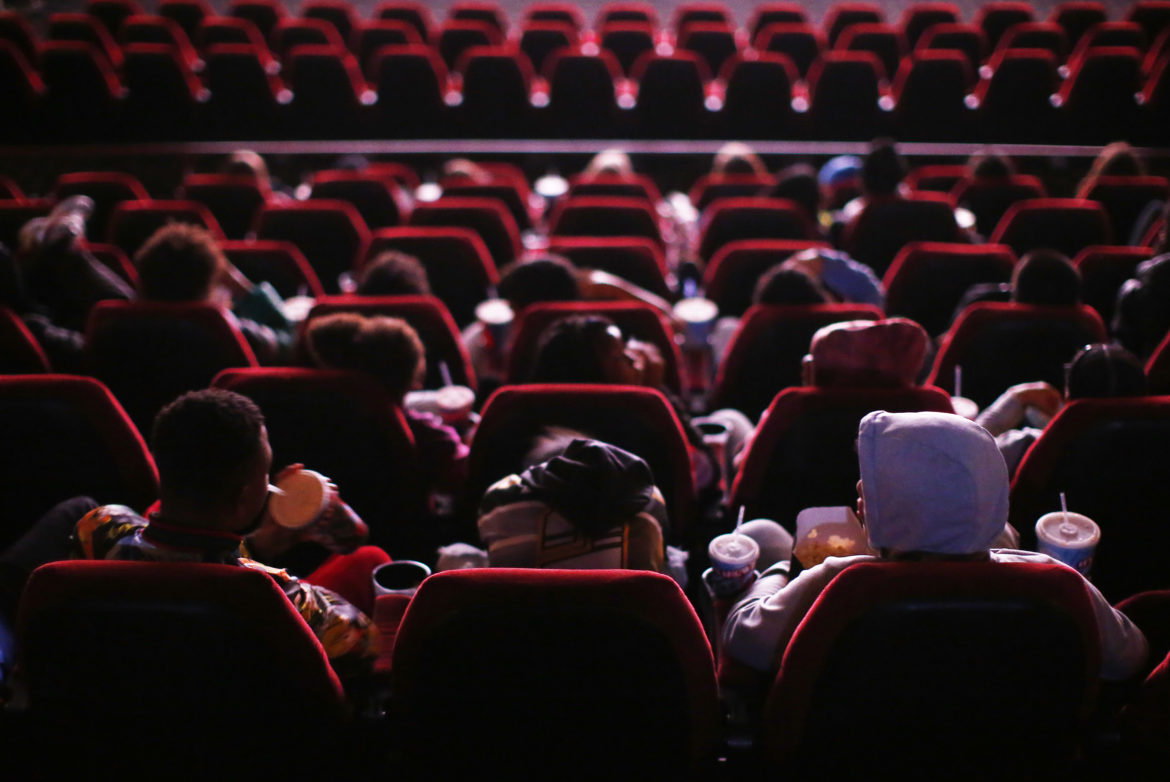 It was a rainy Tuesday afternoon in December so close to the holiday break that coaxing a productive discussion out of students would be a herculean task.

There’s the old cliché of teachers showing a movie to fill gaps like this, but the film screening planned for this day would be different.

More than 100 students from area middle schools traveled on Dec. 17 to SouthSide Works Cinema to see "Run Boy Run," a film that follows an 8-year-old named Srulik, a Jewish boy orphaned after fleeing Warsaw during Nazi-occupied Poland in 1942.

Yes, the students get to socialize and indulge in soda, popcorn, and chocolates. But they also exercise their minds, with the film provoking questions and commentary from the students.

“I think it’s important for teenagers to know not just about what the Holocaust was, but for them to know about people’s individual stories. That way, the information in history books becomes more real and sticks with you,” said one student from John F. Kennedy Catholic School after a screening of the movie on a different day.

Another student, inspired by the film, dreamt of how they could share such an experience with others in the future: “I could start an organization that one day could benefit and sponsor one of these movies to be shown to other kids my age and give them the privilege to also open up their eyes to history.”

Those kinds of revelations are exactly what Teen Screen is all about. 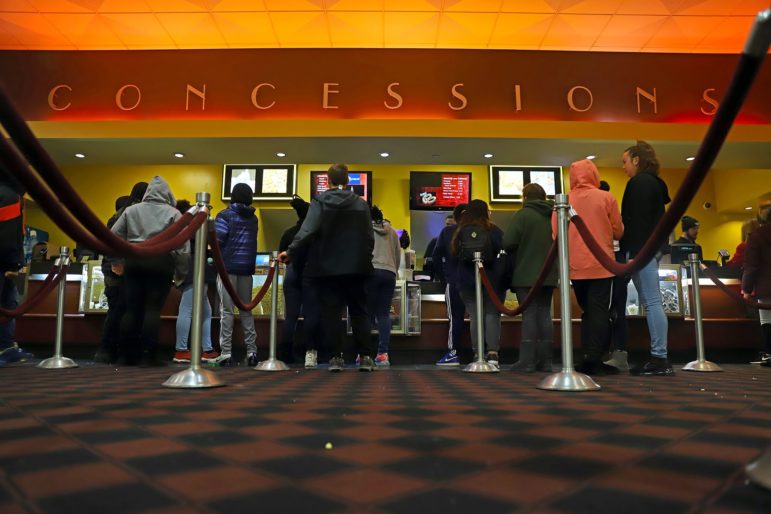 Teen Screen, a program of Film Pittsburgh, has been in operation since 2005. Founded as an offshoot of the Jewish Film Festival, the program shows films and documentaries that center global struggles for human rights and genocide. The showings include international, subtitled films featuring many languages, including Polish, German, Russian, Yiddish and Turkish.

The program’s annual budget of $75,000 is supported by 10 sponsors named on its website. Students can purchase concessions before screenings if permitted by their schools and watch the films in groups with an average size of 132.

Roughly 59,000 students and teachers from Allegheny and Westmoreland counties, as well as other counties in Southwestern Pennsylvania, have participated in the Teen Screen program since its start. About 9,000 people participated in Teen Screen activities in the 2018-19 school year.

TeenScreen is leveraging the next generation’s attachment to visual media to show students what happens when ethnic intolerance and discrimination go unchecked. Spitz Cohan said that in the aftermath of the Tree of Life shooting in October 2018, students in the program discussed the effects of hate and anti-Semitism and how it related to films they were watching, often ones about the Holocaust.

"They not only wondered why we haven’t 'learned from history,' but they also wanted to do something to help the victims and prevent hateful actions in the future," Spitz Cohan said. 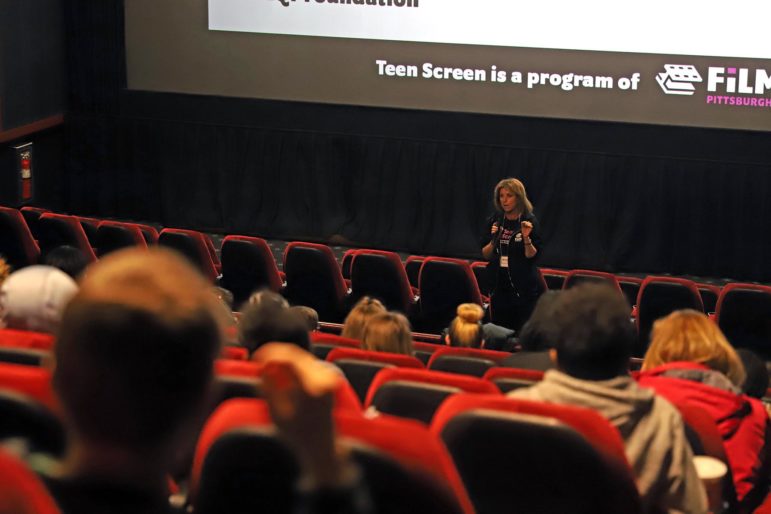 Programming has not changed since the 2016 presidential election, Spitz Cohan said, but attendees doubled the next year as teachers looked for tools to start difficult conversations in a divisive political climate.

“We think film is a great way to connect with students who may not respond as well to education in the classroom,” said Teen Screen Director Lori Sisson.

TeenScreen uses a student-centered teaching approach to eliminate the “hierarchy” that exists in traditional classrooms, where teachers guide discussion. Instead, the curiosity of students leads the themes they discuss as a group.

“[W]e try [to] level the playing field by offering our films for free and providing assistance with transportation funding for struggling schools, and we hope to bring diverse groups together in the cinema to experience the film together and talk about it afterwards — offering their varying perspectives” Sisson wrote in an email.

Sisson said Teen Screen doesn’t work with school districts directly, but relies on passionate teachers who are looking for ways to support how and what students learn. In 2020, Teen Screen is looking to identify new partners.

“We’ve partnered with educators teaching German, history, English ... I mean the list just goes on and on,” Sisson said.

“We educate the kids, and we educate the teachers so they can learn from each other,” said Mimi Botkin, a volunteer educator with Teen Screen and a former English teacher at Pittsburgh Public Schools and Fox Chapel Area Schools. 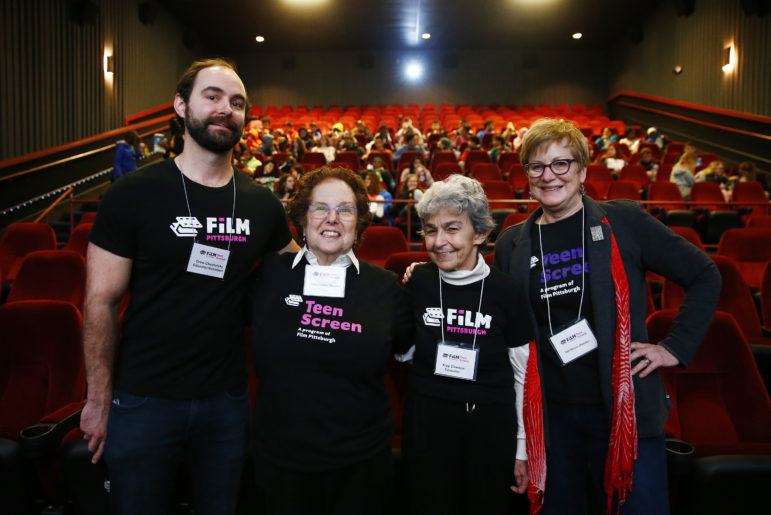 (From left) Drew Checkelsky, Mimi Botkin, Kipp Dawson and Lori Sisson pose for a portrait before a screening for students at the SouthSide Works Cinema as part of Teen Screen on Jan. 15, 2020. (Photo by Jared Wickerham/Pittsburgh City Paper)

Through film, Botkin said the "program teaches students how to watch intelligently,” seeking broader context about the era and the struggle. Botkin said it's all about students understanding their place in the world.

“We show them what their personal power is … that they are upstanders and changemakers in the world,” she said.

Kipp Dawson, another volunteer who is a former Pittsburgh Public Schools English teacher and librarian, said the most significant lessons are the ones that empower students, individually and as a community.

Dawson said Teen Screen aims to help students understand history beyond memorizing dates and events. They want students to consider how values change and what role morality plays in our history.

Dawson shared with the students at the "Run Boy Run" showing her own personal story. She told them her Jewish parents fled their home in Eastern Europe in the “early 19-teens” because of Russian dictatorship and violent anti-Semitism. She told a reporter afterward that students sometimes tell her after she shares her family history that she is the only person they have met touched by conflicts they learn about in their history books — and that’s powerful.

Sharing personal stories is just one of the many ways Dawson said educators can connect with students on a deeper level, beyond assigning essays.

“There are a lot of ways to learn and share ... besides multiple-choice questions,” she said. “Interactions are essential and a dynamic way to interact with students’ knowledge.”

Correction (1/22/2020): This story incorrectly stated the name of Kathryn Spitz Cohan and incorrectly said that students are provided complimentary snacks. Screenings are free, but students pay for concessions. We have updated statistics on the number of students served based on new information from Teen Screen.

Jourdan Hicks is the PublicSource community correspondent. She can be reached at jourdan@publicsource.org.