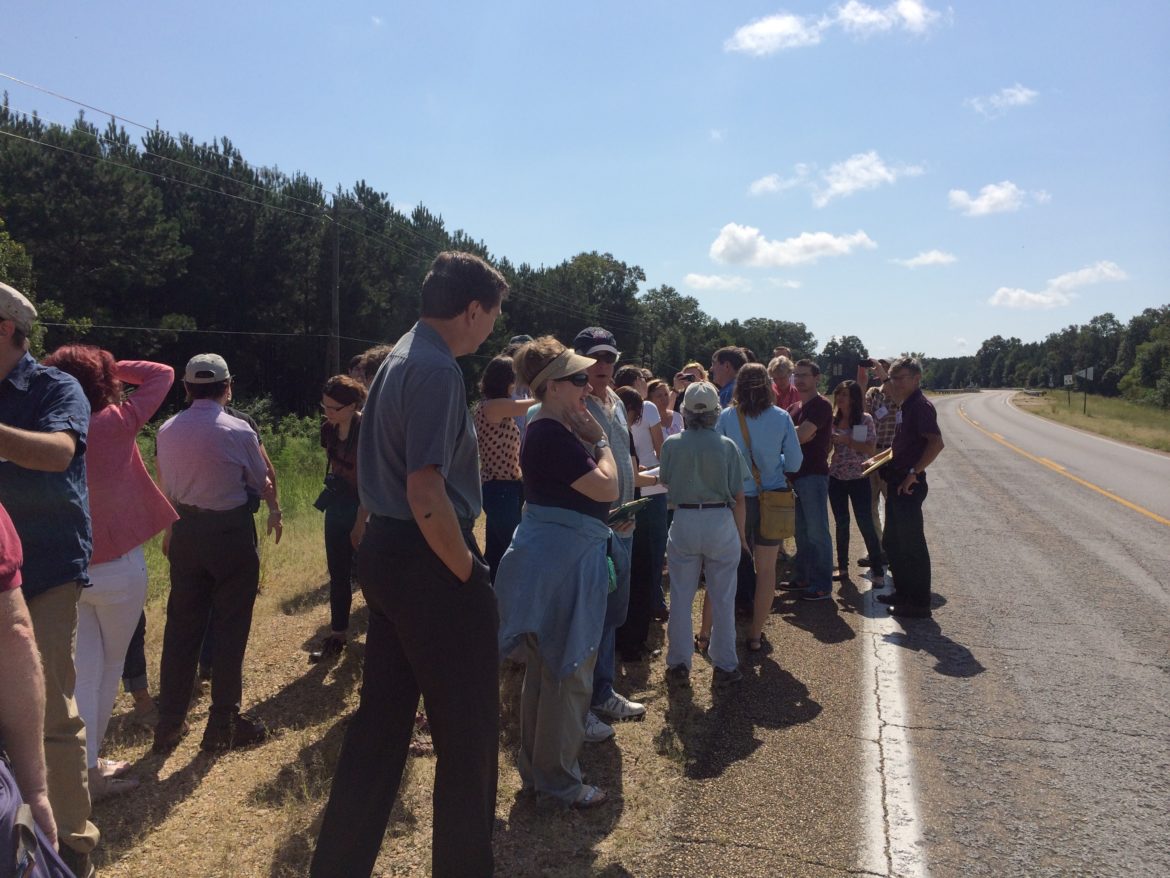 In early September I found myself crammed on a bus with about 50 feisty environmental journalists rolling around Mississippi. We were on a mission to scope out a couple of oil-drilling sites and we were hoping to get our eyes on some fracking.

It didn’t really go as planned.

We’d left New Orleans early that morning where we were attending the 2014 Society of Environmental Journalists (SEJ) conference with more than 700 attendees. SEJ is an annual conference where environmental journalists from around the world gather to discuss how to tackle reporting on important topics like climate change, shale drilling, natural disasters — anything that affects the environment.

As we passed behemoth petrochemical plants tucked into marshlands on our way into Amite County, Miss. (where the Tuscaloosa Marine Shale is getting fracked for oil), speakers from the oil and gas industry, local environmental advocacy groups and researchers looking at drilling impacts spoke to us about the region’s fracking boom.

The gist of the conversations on the bus went something like this:

Hydraulic fracturing and horizontal drilling are helping our country attain energy independence and we have strong regulations to keep it safe - Oil and gas representative.

No. Regulations are lax or non-existent and drillers are ruining natural resources and depleting fresh water supplies - Anti-fracking advocates.

We’re still trying to figure out the environmental impacts of fracking shale - Scientist.

It was a conversation I’ve heard many times in Pennsylvania, but it was interesting to hear that the same problems are occurring in a region with a long history of drilling and some of our nation’s biggest environmental disasters, including the 2005 BP Deepwater Horizon oil spill.

I think an Associated Press reporter at one point tried to get the oil rep to answer why drillers don’t reveal the full chemical makeup of their frack fluids. She didn’t really get a clear answer.

It was interesting for me to share war stories with reporters from other states about the difficulties of reporting on drilling — namely how frustrating and difficult it is sometimes getting information out of both the oil and gas industry and the government.

For example, I was told by an Environmental Protection Agency official attending the conference that press contacts for the agency have adopted a rule of sending emailed responses to reporters instead of talking to them on the phone.

I’ve received many emails like this (not from the EPA, but other state government entities and the oil and gas industry) and it’s discouraging because it’s essentially getting a news release instead of having a conversation. This can limit the ability to fully report on and understand complex issues because you can’t ask a follow-up question or ask for clarification, and it allows the emailer to give a prescribed answer.

We never made it onto an actual well pad that day. I was told that the driller who agreed to host the gaggle of journalists pulled out at the last second.

However, we did get to eye two oil-drilling sites from afar (standing alongside roads like tourists, ogling them from football-field lengths away.)

By midday, our cadre of reporters was getting chased off one site because it was apparently located on private property.

The whole thing was pretty cartoonish: Dozens of excited reporters, iPhones ablaze, trying to Tweet and record some gas flaring. We were told by our bus driver that we needed to move because there were snakes where we were standing (that was weird) and then getting herded off the property by the lawnmower man who worked for the property owner (apparently he threatened to call the sheriff on all of us.)

Although we didn’t get our eyes on any fracking that day, it was still educational for me to talk to reporters in other shale states and learn how they’re tackling one of the hottest stories in our country right now.

Plus, to be truthful, it was fun.