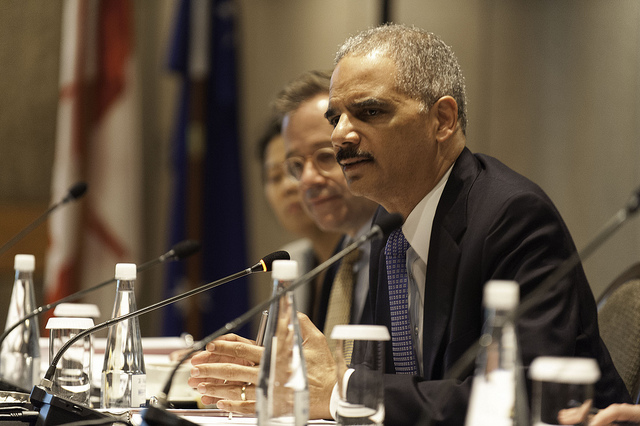 Late last month, the Justice Department announced that George Zimmerman would not face civil rights charges for the shooting death of teenager Trayvon Martin in Florida. The department is expected to clear Darren Wilson in a civil rights investigation of the shooting of teenager Michael Brown in Ferguson, Mo.

In an exit interview with POLITICO, Holder said he will ask that the standard for civil rights cases be reevaluated.

Well, I think that if we adjust those standards, we can make the federal government a better backstop, make us more a part of the process in an appropriate way to reassure the American people that decisions are made by people who are really disinterested, and I think that if we make those adjustments, we will have that capacity.

According to The New York Times, the Justice Department is close to finishing a report that lays blame on the Ferguson Police Department for creating racial tension through years of discriminatory traffic stops.

It’s impossible to know exactly what happened in the confrontation between Wilson and Brown. What is clear is that the killing sparked off outraged protests in the community and started a national conversation about police use of force and perceived racism by white police against minorities.

Because police are authorized to use deadly force if they perceive a threat, charges are rarely filed against officers, even if they kill unarmed citizens.

Civil rights charges are often the only option, though Holder indicates that he thinks the bar may be too high in determining if charges can be brought.

Holder will step down if the Senate confirms Loretta Lynch as his replacement. He said he will use his remaining days leading the Justice Department to consider if the standard for civil rights cases should be changed.

“I think some serious consideration needs to be given to the standard of proof that has to be met before federal involvement is appropriate, and that’s something that I am going to be talking about before — before I leave office.”

Holder has made civil rights causes a major focus of his tenure. He has also advocated for prison reform and has repeatedly said that harsh (and sometimes racially biased) sentencing in drug cases has led to overcrowded federal prisons and put non-violent offenders behind bars with questionable benefit to public safety.

Holder’s official portrait was unveiled Friday at the Justice Department. That ceremony was attended by Aretha Franklin and President Barack Obama.

Holder is the third-longest-serving attorney general in U.S. history.