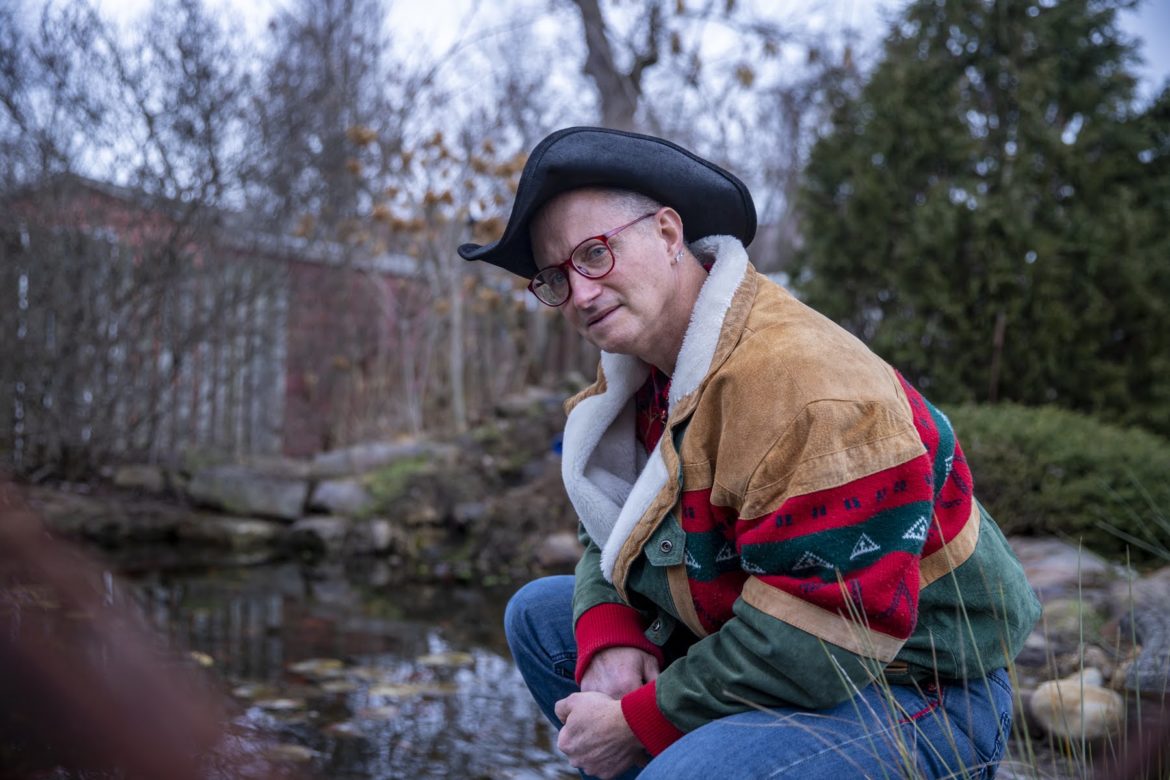 Marc Wagner describes troubling parallels between the response to COVID-19 and the HIV epidemic. (Photo by Jay Manning/PublicSource)

When stay-at-home orders for the coronavirus were announced in March, some Pittsburghers who have lived with HIV for decades felt what they described as post-traumatic stress from the first epidemic they lived through.

“It’s like déjà vu all over again,” thought Marc Wagner, who was first diagnosed with HIV in 1985. “And this one could take you out much faster.”

Several Pittsburghers living with HIV told PublicSource the COVID pandemic echoed many of the scariest and most dangerous parts of living through the HIV and AIDS epidemic, including confusion about the science, social isolation, a reluctance to adopt public health measures and a lack of leadership from the president of the United States. They said the way many have dismissed deaths of the elderly from COVID-19 in order to open the economy reminded them of how gay men’s health was passed over during the AIDS crisis, a time of rampant homophobia.

“When Reagan was president he didn’t want to acknowledge HIV,” Wagner said in December. President Ronald Reagan didn’t mention the disease in public until 1985, several years after it had begun killing people. “Much like we see with Trump. He’s telling people don’t worry about it, don’t wear a mask.”

Even some of the same scientists at the forefront of the HIV crisis, such as Dr. Anthony Fauci and former CDC Director Robert Redfield, returned to play central roles in the latest pandemic. Some healthcare experts who have worked during both the HIV and COVID epidemics said comparing both epidemics could provide insight as we continue to address COVID-19 and try to prevent future epidemics.

The HIV and AIDS epidemic has been ongoing for more than 40 years and is estimated to have killed more than 32 million people across the world. Still several thousand people are dying every year in the United States, even though medication exists to prevent the virus from causing harm.

COVID has killed more than two million people in just over a year.

“I was staying home a lot at night. I wasn’t seeing people. When I would travel, I would stay in my room. I wouldn’t go anywhere.”

Stuart Fisk, the director of Allegheny Health Network’s Center for Inclusion Health, was working with HIV-positive patients in San Francisco in the 1980s, and he said the higher death rates among Black Americans then and now point to a systemic failure of the nation’s public health infrastructure.

“There is no genetic reason” for the racial disparities seen in both epidemics, he said. “It’s simply due to racism, social isolation and poverty.”

Mike Hellman, who tested positive for HIV in 1985, said the isolation of the COVID-19 pandemic reminded him of the early 1980s when it wasn’t clear how AIDS was spread. He knew gay men like himself were getting sick, but he didn’t exactly know how.

“I was staying home a lot at night. I wasn’t seeing people,” he said. “When I would travel, I would stay in my room. I wouldn’t go anywhere.”

The hardest part of the COVID-19 pandemic for him has been the isolation. Hellman, like many HIV-positive individuals, has been anxious that HIV may make them more susceptible to COVID-19. Even as the early science shows this isn’t the case if they are taking medicine for it, Hellman, 63, worries that he’s more at risk because of his history with pneumonia, bronchitis and high blood pressure.

“I really feel like if I get this thing, I’m going to die because my lungs are going to collapse and I’m not going to be able to handle it,” he said. He hasn’t gone back to his gym since it was first closed and has only been to a restaurant once. 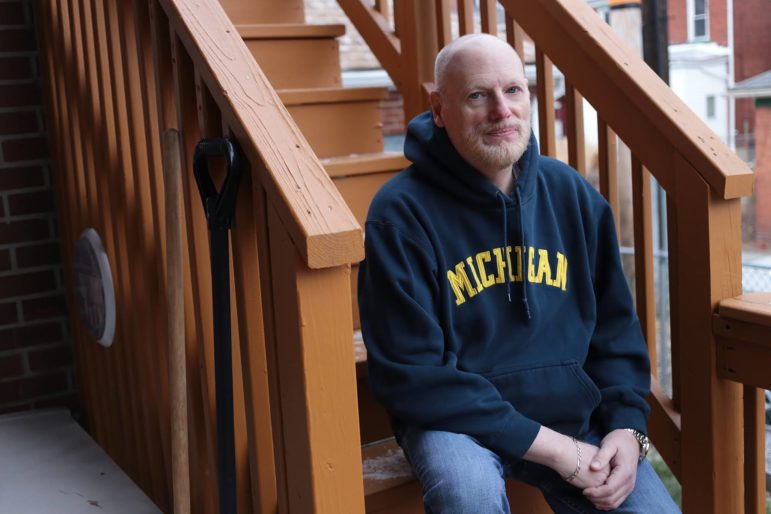 Mike Hellman said that when marginalized people are hit hardest, not enough is done to stop the disease. (Photo by Ryan Loew/PublicSource)

HIV status on its own probably doesn’t make them more at risk because many are controlling the virus with daily drugs, said Dr. Charles Rinaldo, who has been studying a group of HIV-positive men at the University of Pittsburgh for 36 years. But new research shows that men living with HIV are developing other chronic diseases that do put them more at risk, Rinaldo said.

HIV-positive individuals are showing signs of aging more quickly. They develop heart disease, lung disease and kidney diseases earlier and more frequently than others their age, Rinaldo said. These diseases make them more at risk of dying from COVID-19. Because a disproportionate number of Black men have HIV, this is one of the reasons more Black men are dying from COVID-19.

Hellman said because marginalized groups suffer the most, not enough is being done to stop the disease. During the early years of the AIDS crisis, it was because he was a gay man. And now he said it’s because he is older and isn’t in perfect health.

The attitude among many people who don’t wear masks or who have ignored public health measures has been, “It’s just hitting older people, they’re going to die anyway,” he said. “These are dispensable people. We don’t need to worry about it.”

Donald Trump’s promotion of hydroxychloroquine, a drug that hasn’t proven effective at fighting COVID-19, reminded Hellman of his early days taking AZT. The drug, which was touted by Dr. Anthony Fauci, required him to get blood transfusions. Eventually he had to stop taking it because it made him anemic. It was later learned that AZT was being prescribed in much larger doses than necessary.

"These are dispensable people. We don’t need to worry about it.”

“Initially our relationship with Dr. Fauci was touch and go,” Wagner said. “He was young at that point, and we were angry that things were not moving.”

Hellman exercises to Silver Sneakers workout videos in the morning and then texts 100 of his phone contacts a positive affirmation for the day. It takes him 30 minutes every day to send out the texts and has taken on new importance to him during the pandemic isolation. But some days, he said, after he’s done texting everyone, he begins to feel down.

“I’m like: ‘What am I going to do today?’” he said. “I never had to think about that. There was always something to do.”

Yvette Williams has been Fisk’s HIV patient for more than 20 years and now works with him to help others deal with learning they are HIV positive by counseling them and taking them to appointments. She recently asked Fisk: “Doesn’t this remind you of HIV when it started?”

Williams, who recently received her first dose of a COVID-19 vaccine, said the social distancing from COVID-19 may be making new HIV patients feel more stigmatized, even though the precautions are about COVID.

“I used to hug my clients all the time,” she said. “I can’t hug nobody. It makes you feel the stigma of the virus.”

Wagner said the lack of a coordinated federal government response and misinformation about COVID-19 early in the pandemic reminded him of the HIV crisis.

“Back then, oftentimes the patients had to be their own doctors, we had to learn about the immune system and the disease,” he said. “It was still a very, very scary time. We didn’t know what was going on in our bodies and when we were going to die.”

Some of the basic technology public health experts rely on now, including the most commonly used coronavirus test, came out during the HIV and AIDS epidemic. The epidemic also could hold some clues to the future of COVID-19 and other pandemics, local HIV experts said.

“I can’t hug nobody. It makes you feel the stigma of the virus.”

Although coronavirus vaccines exist now that could potentially eradicate COVID-19 eventually, fully realizing this potential could be a challenge. Current HIV medications reduce the viral load in HIV patients so much that it often isn’t transmissible even to people with whom they have intercourse. And prophylactic medication can prevent people in high-risk groups, such as men who have sex with men, from contracting HIV in the first place.

But despite the availability of these drugs, there were nearly 40,000 new cases in 2018 in the United States, the most recent year for which information is available. More than 6,000 Americans died of AIDS in 2016, and it was the ninth leading cause of death among Americans between 25 and 34. 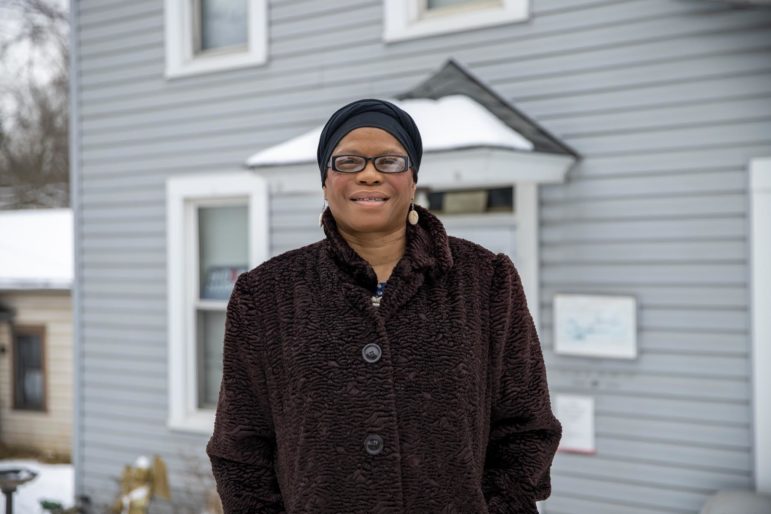 Yvette Williams said she misses being able to hug the new HIV patients she counsels and fears it is worsening the feeling of stigma, even though the precautions are because of COVID. (Photo by Jay Manning/PublicSource)

The disease persists, particularly among younger gay Black men living in the South, said Dr. Mackey Friedman, the co-director of the Center for LGBT Health Research at Pitt. “If you think about our social safety net as a society and think about areas in communities that are less privileged—so populations and places with lower social safety net access and utilization and higher degrees of stigma and disparagement,” he said, “that’s where you’re going to find HIV highest.”

And while 86% of HIV cases are diagnosed, more than a quarter of those diagnosed cases don’t receive adequate medical care and 40% of those cases still don’t have their viral loads suppressed, according to data from the Centers for Disease Control and Prevention.

Fisk said that at the root of the HIV epidemic, the opioid epidemic and the COVID-19 epidemic has been a public health infrastructure that has been gutted. He said the focus on “healthcare widgets” like procedures and vaccines that can turn a profit, has come at the expense of preventative local health forces that can respond more rapidly with information, contact tracing and information campaigns that could reach the people who need it.

“But those don’t make money,” he said. “And we have a health system that is primarily driven by money.”