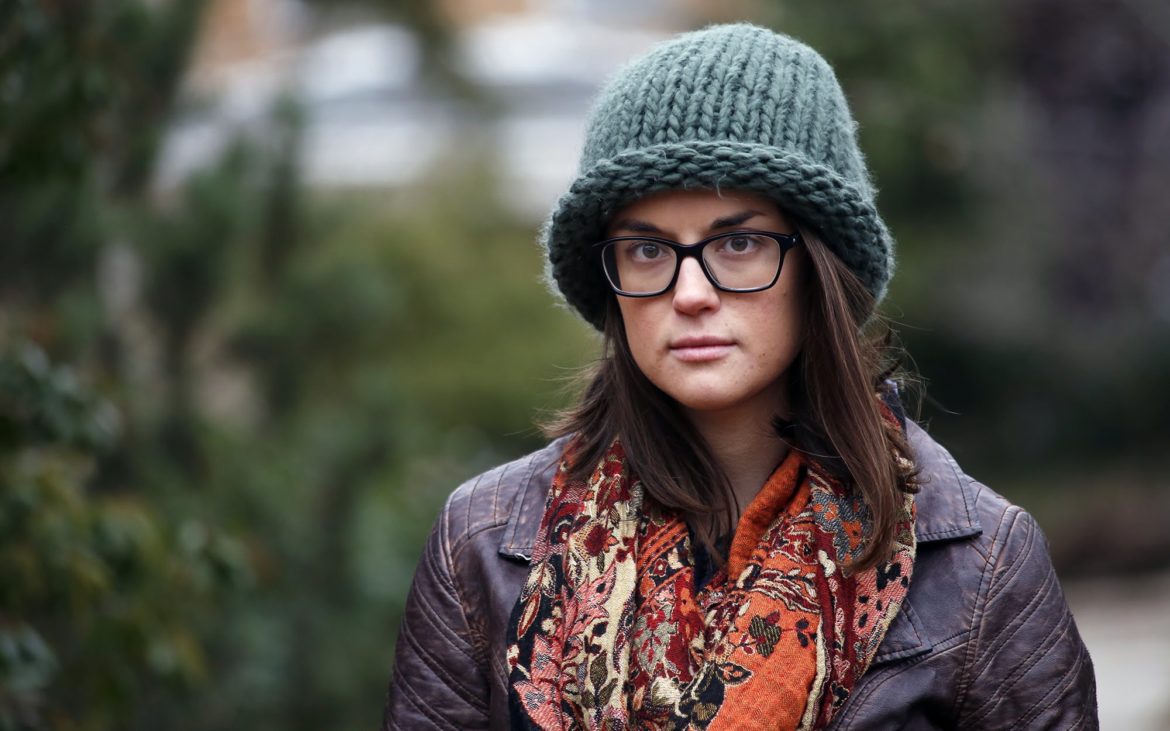 Dafna Bliss, a 25-year-old social worker who is Jewish, remembers learning about the greedy Jew stereotype in Jewish day school. Learning the historical truth behind those stereotypes made Bliss feel "uneasy." (Photo by Ryan Loew/PublicSource)

In the aftermath of the shooting at the Tree of Life synagogue, Jews and non-Jews alike expressed shock at the violent explosion of anti-Semitic violence.

Descriptions of the shooting as “unbelievable” and “senseless” have punctuated public discourse in Pittsburgh and beyond. “This really, for many, comes out of nowhere,” said local historian and Jewish history expert Barbara Burstin.

However, in the context of structural anti-Semitism and the role it plays in white nationalist ideology, it becomes apparent that the factors that led to the shooting have been around for a long time.

Diana Clarke, 27, is a history Ph.D. candidate at the University of Pittsburgh whose research focuses on Ashkenazi Jews (Jews of European descent) in the United States and their relationship to whiteness and systems of oppression. Clarke is one of many arguing that the ideology of alleged shooter Robert Bowers draws on centuries of myths and stereotypes about Jewish people that continue to animate and support oppressive ideologies.

Clarke interprets the shooting through the constructs of white supremacy and anti-Semitism that “give Jews contingent access to whiteness and safety and power and then blame them for all the systemic violence in the world.” 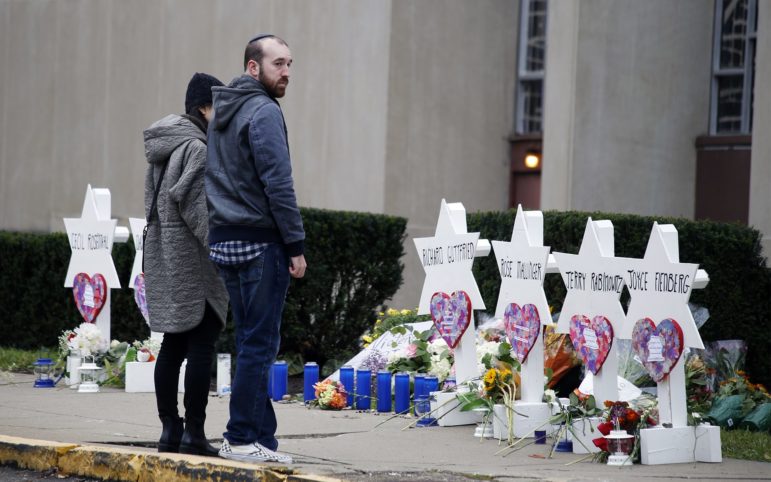 People visiting a memorial site outside the Tree of Life synagogue in Squirrel Hill in the fall. The memorial has since been moved elsewhere. (Photo by Ryan Loew/PublicSource)

The Jewish tradition places a strong emphasis on working toward social justice and specifically focuses on the just treatment of immigrants and refugees. Bowers allegedly targeted Tree of Life on Oct. 27 because one of the congregations housed in the building had recently done some philanthropic work to benefit the Hebrew Immigrant Aid Society [HIAS].

Bowers appears to have viewed the congregation’s partnership with HIAS as evidence supporting an age-old anti-Semitic myth that Jewish people have control of the world and sinister intentions to weaken or eliminate white Christians. Bowers’ posts on social media in the weeks preceding the shooting broadcast his fear of “white genocide” at the hands of non-white Americans and immigrants in a plot masterminded by Jews.

But in reality, anti-Semitism functions as a system of oppression that goes beyond these violent acts. Understanding the pattern of discrimination against Jews is a crucial step toward processing the trauma of violent incidents like the one that occurred at Tree of Life.

Ben Case, an activist and Ph.D. candidate in sociology at Pitt, has studied and written extensively on how anti-Semitism functions in relation to other systems of oppression. 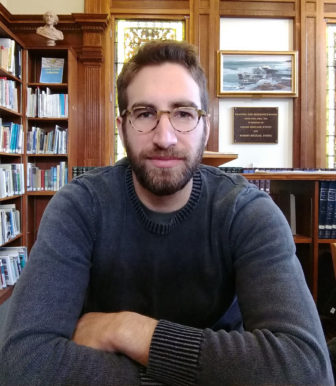 “A lot of us assume that because we understand other forms of racism that anti-Semitism is kind of like that but not as bad… it’s actually just different,” he said. “Jews don’t fit well into the frameworks that we use to understand race and racism.” As a result, “we end up trying to shoehorn the Jewish experience into” existing categories like ‘white’ and ‘non-white,’ when neither is accurate. “That sort of lack of fitting in either camp is part and parcel to the way Jewish identity has developed in an anti-Semitic system.”

The nature of anti-Semitism is unique compared to other forms of oppression, such as anti-black racism, in at least two ways. According to scholars studying it, anti-Semitism functions cyclically and also by pushing Jews into an intermediate position between the ruling class and other oppressed groups.

Unlike anti-Semitism, anti-black racism functions through a fixed racial hierarchy that constantly enacts physical, economic, political and spiritual violence against black people. There are no “safe periods” during which this systemic racism seems to disappear. (To be sure, some Jewish people are black and may experience both levels of prejudice.) 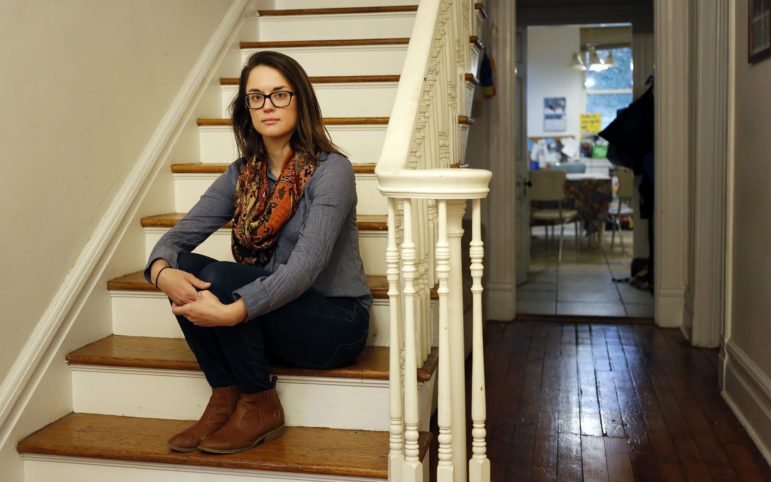 Dafna Bliss spoke of the "seed of fear" the Jewish community feels, never knowing when there will be another burst of anti-Semitism. (Photo by Ryan Loew/PublicSource)

Case, 34, grew up in a part of New Jersey, which he described as having “no Jews” despite being near New York City. In high school, he said, he “very much felt isolated and alone” in his Jewishness and often encountered casual use of anti-Semitic stereotypes.

Although Case grew up in a time and place where it seemed Jews were safe from violence, he said he feels fear and anxiety about anti-Semitism now and an “insecurity that no one else is going to have our back when it comes down to it.”

Case’s sentiment was echoed by Dafna Bliss, a 25-year-old social worker who is Jewish and living in Squirrel Hill.

“No matter how well things seem to be doing, the Jewish community never feels completely secure. There’s always this little inkling, this little seed of fear,” she said.

In contrast to anti-black racism, which situates black people at the bottom of a fixed racial hierarchy, anti-Semitism allows Jewish people some amount of power and privilege over others.

“No matter how well things seem to be doing, the Jewish community never feels completely secure.”

Historian Aurora Levins Morales writes in her essay on the subject: “The whole point of anti-Semitism has been to create a vulnerable buffer group that can be bribed with some privileges into managing the exploitation of others, and then, when social pressure builds, be blamed and scapegoated, distracting those at the bottom from the crimes of those at the top.”

The dynamic of Jewish people as an intermediary between marginalized groups and the white ruling class still exists today and can be seen in the history of redlining. “Because of racist economic policies like redlining you get Jews becoming landlords in a lot of poor neighborhoods,” Case said.

Redlining, or the process by which the mid-20th century government-sponsored Home Owners’ Loan Corporation used the race and ethnicity of neighborhood residents to determine that area’s eligibility for loans, denied black people opportunities for home ownership by deeming them the least desirable urban residents. Jewish people were neither the most desirable nor the least desirable to the loan corporation. As such, they had some access to federal loans that enabled them to become property owners.

As author Ta-Nehisi Coates writes in an essay on Jews and redlining in Chicago, many Jewish property owners took this opportunity to rent to black families whose housing options were otherwise severely limited. Some Jewish landlords were kind and helpful, and others were oppressive and manipulative. Regardless of their behavior as landlords, Jewish people were only permitted to have power over black people because of the confluence of structural anti-Semitism and anti-black racism.

The formation of anti-Semitic stereotypes

Either way, Christian vilification of Jews as heretical nonbelievers and “Christ-killers” became institutionalized in European Christendom. The construction of the “Jew as enemy” trope took on a supernatural component as the medieval European Catholic Church began to teach that Jews were united with the devil in his quest to destroy Christ and Christians. To spread that message, Christians often relied on specific stereotypes and myths to illustrate Jews’ supposed spiritual corruption.

One of the most well-known negative stereotypes is that of the greedy Jew. 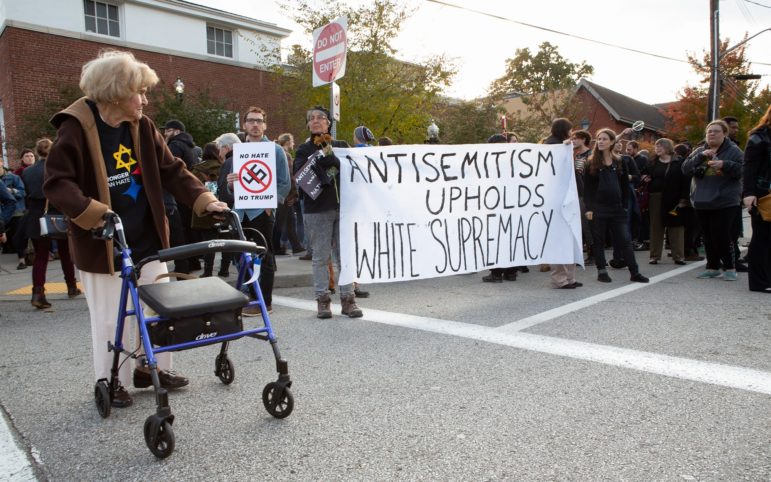 A woman walks past a banner opposing white supremacy and anti-Semitism during the March for Peace on Oct. 30, 2018. (Photo by Heather Mull/PublicSource)

Jews are often seen as financially untrustworthy or “good with money,” whether that be for good or ill. Negative representations of Jewish people that emphasized greed and corruption have followed Jews throughout centuries of transcontinental migrations, making Jewish communities more vulnerable to violence.

Historians argue that anti-Jewish stereotypes like this one are the result of structural anti-Semitism. In other words, they believe anti-Semitic laws and societies created conditions that pushed Jewish people into financial work and then punished them for it.

The Catholic Church taught that money-lending was a sin and tax-collecting distasteful. Therefore, in the faith-based societies of the Middle Ages, only non-Christians were permitted to lend money or collect taxes. As a result of laws and restrictions that funneled Jews into work as money lenders and tax collectors, among other professions, Jewish communities gained financial expertise.

"I don’t want to believe stereotypes, but at the same time, part of it felt true to me.”

Later laws that barred Jews from specific professions and land ownership kept Jewish people employed in work that was undesirable to the church and ruling elites, but nevertheless essential to Christian states.

Clarke, the doctoral candidate in history, recalled a recent experience that brought the stereotype to the surface. Out celebrating a birthday at a bar featuring karaoke, Clarke and others watched a person who looked to be in their late 20s sing “If I Were a Rich Man,” a song from the musical Fiddler on the Roof in which the Jewish lead character, Tevye, sings about his desire for money.

Watching the stranger perform the song, Clarke felt deeply conflicted — unsure as to whether or not the person was Jewish and also whether or not that mattered. “[I was] feeling a lot of anger and shame at how much I secretly love this song, but don’t feel I can perform that enjoyment in public because of the complicated message about Jewishness that this song is sending,” Clarke said, adding that there is “so much cultural shame” surrounding the stereotype.

“I don’t even know what I would do if I didn’t have these theoretical tools to contain and shape and make sense of these experiences.”

The example of the greedy Jew stereotype shows how anti-Semitic laws pushed European Jews into the intermediate position described by Morales, where some were allowed to prosper if they managed the taxpayers on behalf of those in power. The dynamic put them in a position vulnerable to scapegoating and violence.

“Jews bec[a]me this face of capitalism,” Clarke said, and that “can create a discourse [among] more marginalized people that Jews are the ones oppressing them.”

In this situation, Clarke explained, the ruling class is “rendered invisible by the visibility of Jews,” which sets the stage for Jews to be blamed for the economic misfortune of others.

The stereotypes are often mobilized before and during periods of sustained anti-Semitic violence to blame Jewish people for the exploitation of the masses. The Third Reich, for example, disseminated vast amounts of anti-Jewish propaganda, often in educational materials for children, that emphasized anti-Semitic lies like “The God of the Jews is money.”

For Clarke, knowing the history of anti-Semitism has helped in processing the trauma of the shooting. “I don’t even know what I would do if I didn’t have these theoretical tools to contain and shape and make sense of these experiences.”