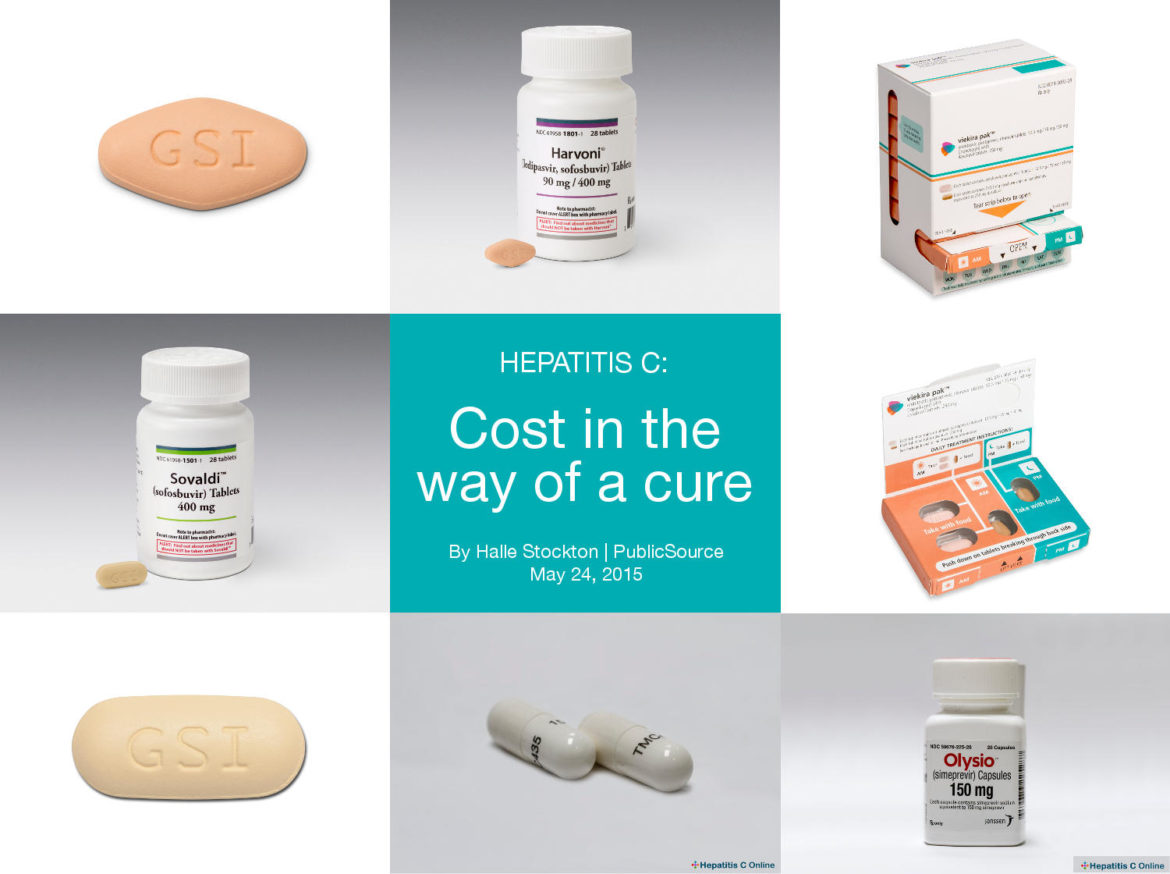 Dee’s liver is scarred, but just a bit too healthy for her insurance to foot the bill for the new medications that cure hepatitis C more than 90 percent of the time.

The Butler County resident, who suspects she got the virus getting a tattoo, was recently told by her doctor to come back in a year.

John, a retired small-business owner from Washington County who was given blood in the early 1990s, was also denied the antivirals. Now, as he watches a friend grow weak from liver cancer, he fears he’s glimpsing his future.

An appeal to a pharmaceutical company is Jennifer’s last shot at treatment after the insurance company denied her three times. The 34-year-old office manager — who said she gave up her heroin habit nine years ago — can barely make it through the workday because of fatigue.

“My quality of life is not what it was even a few months ago,” she said from her McKean County home.

These Pennsylvanians, who asked that their last names not be used because of the stigma surrounding hepatitis C, are among an estimated 205,000 in the state and 3.2 million in the country with the infectious blood-borne virus.

The vast majority of those patients could be cured by new all-oral medications that came to market in late 2014, but because the costs and demand are so high, insurers are restricting who gets to be treated.

The obstacles were put in place as public and private health plans braced for the floodgates of potential recipients to bust open.

Previous treatments had harsh physical and mental side effects, and a year of treatment only yielded relief half the time. People put off treatment waiting for these new meds with regimens of only eight to 24 weeks.

The treatments range from $60,000 to $190,000, based on the medication and how long it’s needed. That’s about $1,000 to $1,200 a pill before the discounts regularly negotiated between drugmakers and insurance providers.

“We do want to ensure access to medications for the right patients. We also have to be good stewards of healthcare dollars,” said Ryan Cox, Highmark’s director of clinical pharmacy. “As costs do come down, that may open up the opportunity to reevaluate who the appropriate patients are.”

Dr. Kapil Chopra, director of the UPMC Center for Liver Diseases, said he encourages early detection and treatment to stave off cirrhosis and cancer that makes hepatitis C the leading cause of transplants.

“The right time to treat this disease is early and not wait until a patient has developed an advanced disease,” he said, “and this is where there's a disconnect between what insurance carriers are currently approving versus what should be done in day-to-day life.”

A problem now or later

Hepatitis C is often referred to as a stealth virus. Doctors say you can have it for 30, 40, 50 years before you notice an ache in your side.

Some people can live and die with no problems from hepatitis C. But 70 in every 100 cannot escape chronic liver disease; and up to five in every 100 die of cirrhosis or liver cancer, according to the state Department of Health.

In 2007, the death rate for hepatitis C surpassed that of HIV.

The Centers for Disease Control and Prevention issued a guideline in 2012 that all Baby Boomers (people born between 1945 and 1965) should be screened for hepatitis C because they’re five times more likely to be infected than those in other age groups.

In Pennsylvania, a Senate committee is reviewing a proposed law that would require healthcare providers to offer the screening.

Hepatitis C is spread by any activity that involves infected blood entering the bloodstream of another. One of the most common ways to get it is by intravenous and intranasal drug use. It takes a very small amount of blood to spread the virus, and only one snort of cocaine or plunge of heroin with contaminated paraphernalia to become infected.

The state’s heroin epidemic is driving a spurt of hepatitis C cases among younger people in the state. Of about 119,000 cases reported to the state between 2003 and 2014, more than 20,800 people ages 11 to 30 contracted chronic hepatitis C, about 17 percent of cases.

Stories like this are becoming common: An 18-year-old woman tried heroin twice with a boyfriend and is now drug free, but she is left with hepatitis C and ineligible for the medications, said Karen Brandt, a nurse with Blair Gastroenterology Associates, which has 200 patients with hepatitis C from Lewistown to Johnstown.

“She’s not cirrhotic ...but she has fatigue and her joints and muscles ache,” Brandt said.

If she does develop cirrhosis, Brandt said that even if treated, she is at higher risk of liver cancer, brain and nervous system damage, internal bleeding and other symptoms.

Dr. Michael Babich, a hepatologist in the Allegheny Health Network, said he understands that insurance providers fear they’ll go bankrupt if they treat everyone, but even as a pure business decision, he’s not sure it makes sense.

PhRMA, a pharmaceutical lobbying group, predicts the drugs could save $9 billion per year.

It’s unclear whether the cost savings are that straightforward.

A March 2015 study in the Annals of Internal Medicine estimated that treating patients with the new drugs would cost an additional $65 billion over five years, and that the hospitalizations and other health issues prevented by the treatments would only offset $16 billion of that.

A Marine turned executive chef, Dean Gress of Pittsburgh learned he had hepatitis C in 1992 when he tried to donate blood. He immediately looked to his left bicep and recalled the time when he was drinking with Marine buddies and visited a tattoo shop to get branded with the eagle, globe and anchor.

It was 1984. Sterilization practices weren’t what they are now at reputable shops.

Gress twice tried the weekly interferon shots paired with ribavirin, a caustic duo known to cause flu-like symptoms and depression. The first course didn’t do anything; the second course dropped his white blood cell count to alarming levels and his doctor stopped the treatment.

“They said it’s too late, just see what happens with your liver,” he said.

Gress, like many others, was waiting for a better option. The wait ended in late 2014.

A University of Pittsburgh Graduate School of Public Health study concluded the new products could make hepatitis C a rare disease by 2036.

Still, each pill is priced like a piece of fine jewelry.

The drug companies say they want to make the meds widely available and they provide discounts to health plans.

Gilead Sciences, maker of Harvoni and Sovaldi, reported in its 2014 year-end earnings call that it gave rebates exceeding 50 percent to public payers, like Medicaid and the Veterans Administration.

Even with discounts and many patients being denied, the bills add up quickly.

ProPublica reported in March that Medicare spent $4.5 billion in 2014 on the new medications. In 2013, before the drugs came on the market, the program spent about $286 million on previous therapies.

Pennsylvania’s Medicaid program spent $133 million on the medications between January 2014 and March 2015, according to the state Department of Human Services.

The individuals who benefit invariably think it’s worth it.

Gress, who has cirrhosis, was granted a 24-week regimen of Harvoni after being denied on the first try. He’ll take his last pill in mid-June but his blood tests are already showing results.

He was born in 1972 — 18 years before blood banks started screening for hepatitis C.

A doctor noticed his spleen was enlarged at a routine physical five years ago. A father of two children, Cummins was worried about passing it on to them or his wife.

The lurking disease consumed his thoughts. At work, a specialty-fastener distribution shop he owns with his brother, he would comb the internet for information. Cummins was ultimately cured in early 2014 after a 12-week, $100,000 course of Sovaldi. His Highmark insurance paid for it.

“It’s nice to know there’s not something attacking me from the inside,” he said.

Several insurance providers have restricted treatment to people with high fibrosis scores, meaning fibrous, scarred tissue is taking over the liver. And they may have liver cancer or be on the transplant list.

Mary McElrath-Jones, UnitedHealthcare’s public relations director, pointed out via email that hepatitis C progresses very slowly or not at all and that the medications are effective at any stage of liver disease.

“It is important for us to manage high-priced medications in a responsible manner that is clinically sound,” Dr. Stephen Perkins, UPMC vice president of medical affairs, said in a written statement. As the medications evolve, so do the policies, he said.

“The fact remains that if we as a Medicaid program had to treat 30,000 patients with a positive diagnosis of hepatitis C at $100,000 a pop, we would be paying $3 billion,” said Terri Cathers, director of pharmacy for the state Office of Medical Assistance Programs. “It’s unsustainable.”

Alliances are being struck between drugmakers and insurers. Some insurers go exclusive with a medication to get a bargain. Others keep their options open so the decision is between patient and doctor.

Those who are approved can get discounts on co-pays through these programs. For instance, Gress’ co-pay would be $83 a month, but he pays $5 with the Gilead discount card.

When patients learn of the obstacles, many question why they would get screened in the first place. Why find out if the solution is out of reach?

Lifestyle matters, said Alison Kost, a nurse who has conducted more than 6,000 hepatitis C screenings in Allegheny County. “There are lots of other things to do to maintain liver health while you’re waiting for this to shake out.”

Kost advises patients that a balanced diet and exercise, along with abstaining or limiting alcohol and vaccinating against hepatitis A and B, can help.

Seeing a specialist regularly to keep tabs on progression is important, too.

“The point is if these patients are followed carefully they should be able to get treatment before anything bad happens,” Dr. Babich said. “That’s the theory. Now, clearly there are going to be patients who fall through the cracks.”

That is unacceptable and unethical, according to Dr. Stacey Trooskin, an infectious disease specialist with Drexel University College of Medicine in Philadelphia. She equates these rationing measures with putting the greatest public health accomplishment of her lifetime on a shelf.

“The heartbreaking thing is we have a tremendous cure available. It represents a unique opportunity in the history of our country,” she said, “but the challenge remains in getting the medication to people who need it.”

The Jewish Healthcare Foundation has contributed funding to PublicSource's healthcare reporting.
Reach Halle Stockton at 412-315-0263 or at hstockton@publicsource.org. Follow her on Twitter @HalleStockton.

Baby Boomers are five times more likely to have hepatitis C than those of other age groups. About 63 percent of cases reported in Pennsylvania from 2003 to 2014 were for male patients.
Source: Pennsylvania Department of Health

Hepatitis C is the most common blood-borne infection in the United States, affecting an estimated 3.2 million people.

The virus mainly affects the liver and can lead to cirrhosis (liver scarring) and liver cancer.

Hepatitis C is the leading cause of liver transplants in the U.S.

It is transmitted when an infected person’s blood enters the bloodstream of another person.

You should be tested if: