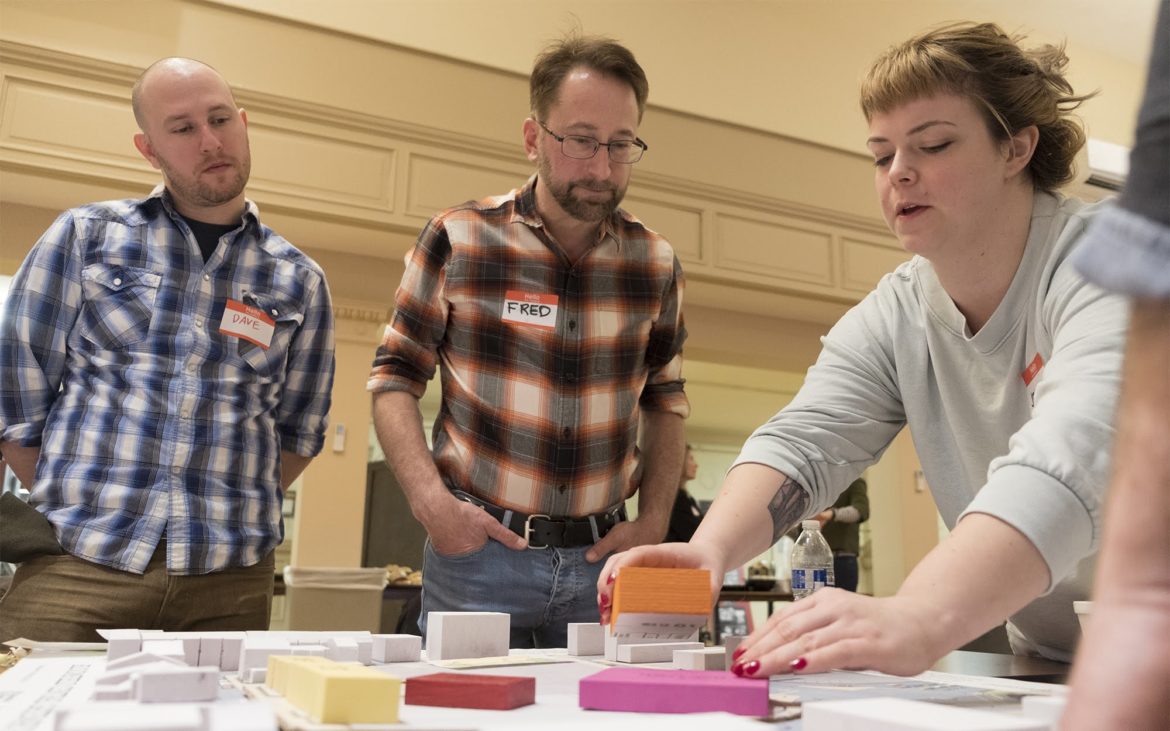 At a Feb. 23 community workshop, David Kushner, Fred Mergner and Jess Cook plot out their ideas for the Bloomfield gateway. (Photo by Heather Mull/PublicSource)

With the future character of Bloomfield in question, more than 50 residents gathered at West Penn Hospital and recalled their favorite neighborhood memories using hair curlers, action figures, dice and other trinkets.

David Weber, who’s lived in the neighborhood since 1997, presented a figurine he said reminded him of a kid in a costume and the memory of taking his son to Bloomfield’s annual Halloween parade.

Nathan Salamacha, one of the younger adults in the group, took an imaginary walk down Liberty Avenue. “Here’s the church, this is Angelo’s pizza right here, here’s Crazy Mocha, Wai Wai Chinese and Gryphon’s Tea.”

Responding to a prompt at a January community meeting, participants used the trinkets to reminisce and mark the most memorable components of the neighborhood. The exercise was the first step in a hands-on process to give residents a say in what happens to one of Bloomfield's most important properties, the ShurSave IGA.

For more than 35 years, Bloomfield residents have bought groceries at the store at the intersection of Liberty Avenue and the Bloomfield Bridge — an area known as the gateway to the Bloomfield. Now the property is being eyed for private redevelopment, and residents are hoping to present ideas to preserve Bloomfield’s character as a diverse and affordable neighborhood. 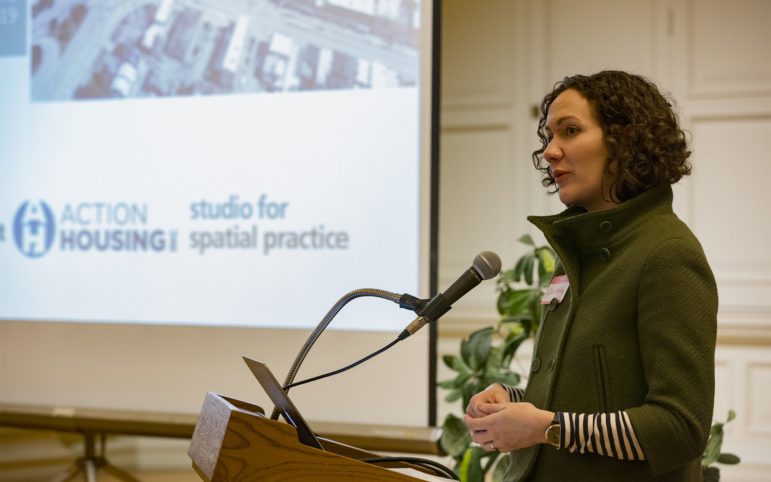 Bloomfield Development Corp., along with the affordable housing nonprofit ACTION-Housing and the Lawrenceville-based design firm Studio for Spatial Practice [SFSP], convened pairs of workshops in January and February to create a formal set of community recommendations for the site. The results will be presented at a public meeting from 4 to 7 p.m. on April 10 at West Penn Hospital.

Nearby communities like Lawrenceville and East Liberty have seen rapid redevelopment in recent years. Linda Metropulos, vice president of real estate at ACTION-Housing, said those communities have also seen a decrease in economic, racial and cultural diversity. Christina Howell, executive director of the Bloomfield Development Corp., said she hopes Bloomfield will preserve its diversity through the change.

“There’s such a strong sense of community,” she said, “and neighbors talk to each other, and there’s just a great mix of ages here.”

Through the trinket activity, participants focused on what they value most about the neighborhood. Common threads included pedestrian safety, accessibility for the elderly and residents with disabilities, income diversity and increased green spaces.

At the second workshop in February, residents zeroed in on the ShurSave site. There, they hope to see affordable, multi-generational housing as well as senior-exclusive apartments. The participants also didn’t want to lose a community grocery store altogether and hope a medium-sized market will be included in any future redevelopment.

Howell told participants at the Feb. 23 meeting that a buyer had been identified for the site, though she did not know their identity or details on a potential development plan. 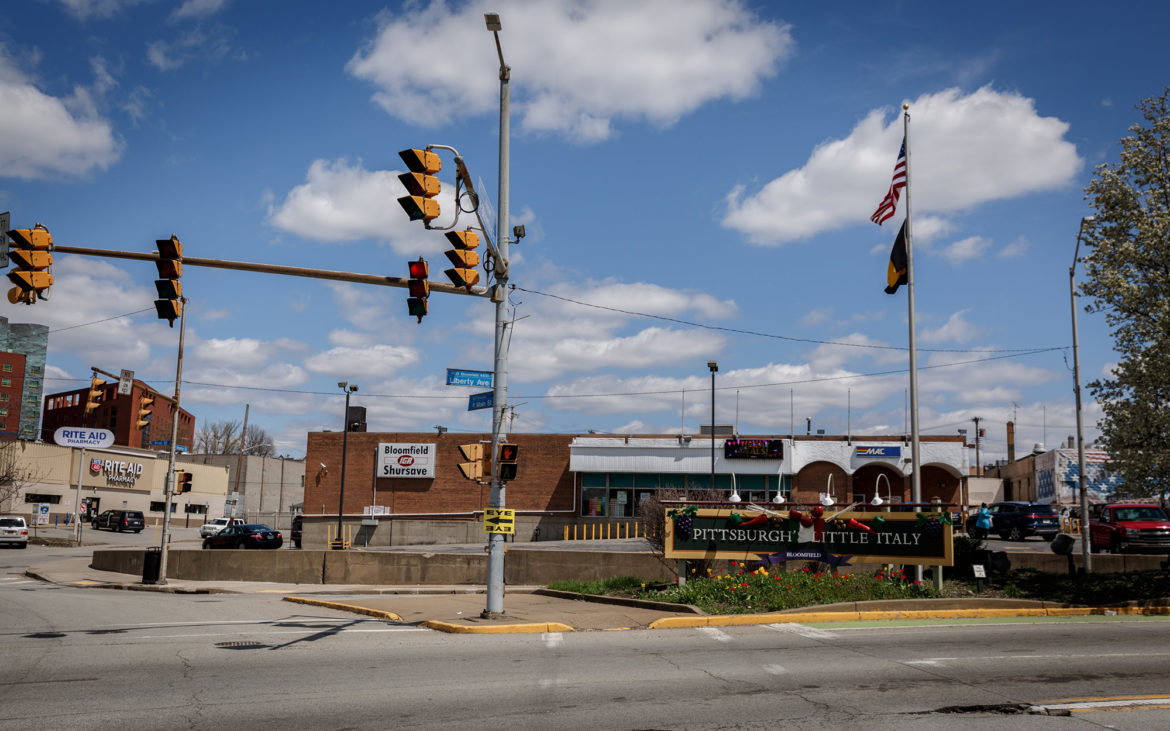 Bloomfield residents hope to have a say in future development at Bloomfield's gateway. (Photo by Maranie Rae Staab/PublicSource)

“Typically a developer of a project of this size...would have reached out to the community by now, or would have made themselves known,” Howell said in a Feb. 26 interview.

Mark Davis, the site’s longtime owner, and real estate agent Anthony Cost both declined to answer questions for this story. The site is currently listed as for sale on the Hanna Commercial Real Estate website.

Before walking away in November, Indianapolis-based Milhaus Development hoped to build a high-end apartment complex on the site. At a January 2018 public proposal meeting, community members in attendance and online overwhelmingly spoke out against the plan. Several people pointed out that the neighborhood was already facing a shortage of affordable and available housing.

At the February workshop, residents split into six groups and worked with a cardboard model of Bloomfield’s gateway and the ShurSave site.

With these materials, groups were instructed to build their ideal Bloomfield gateway, mixing residential, office and retail.

“The way we set this up is the pile of stuff doesn’t all fit on the site,” SFSP principal Jonathan Kline told participants. “This is about kind of trying to come to a consensus as a table and make choices about what you think does fit on the site and how uses should be mixed.”

Kathleen Matejko, 55, is concerned that redevelopment will leave the neighborhood without any grocery store.

“We don’t have a car, most of us,” said Matejko, a lifelong Bloomfield resident who attended both workshops. “We need someplace close where we can shop.”

Residents also said they hope any new development wouldn’t stick out from the aesthetic of the neighborhood. Mik Pappas, an elected district judge for Wards 8, 10 and 11 who was born in Bloomfield, said the appearance of new development should respect and match the rest of neighborhood.

“Anything we can do to pay homage to the history of the neighborhood through the design — apartments with balconies, things like that — would be a lot of added value,” Pappas said while presenting his group’s vision.

But can hands-on brainstorming actually influence what happens at the site?

Several residents voiced concern to their groups about if the final ideas presented April 10 would hold any weight in a private developer’s plan for the site.

State Rep. Sara Innamorato, who represents Bloomfield, attended the February meeting and said she believes community members have more power than they think. 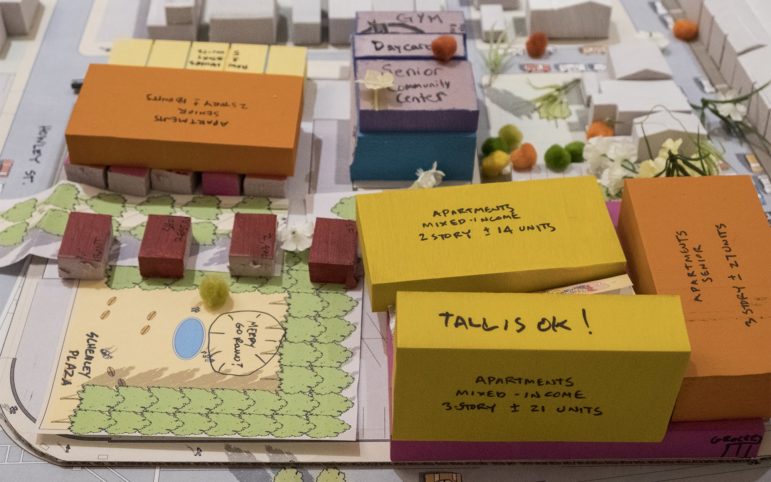 “When you can organize, you do really have power in that,” Innamorato said. “You can at least have a plan to say, if developers do come here … we are really going to make sure that it is for everyone and it is in our vision of a community.”

Howell said resident feedback can impact decisions made by Pittsburgh’s Zoning Board of Adjustment and city Planning Commission.

Based off the models created by participants at the February meeting, SFSP is creating recommendations to influence future development. Kline said the groups came up with ideas that were more diverse than he anticipated. The models included ideas ranging from high building density to sprawling green spaces, gardens and public parks. Participants included everything from affordable rental complexes and community spaces to office buildings and retail stores in their gateway models.

Kline wrote in a March 18 email that SFSP’s April presentation will present two to three hypothetical scenarios for the site, rather than a single recommendation.

The scenarios will describe key values residents prioritized, taking into account financial and legal limits to illustrate the feasibility of the models for developers, Kline wrote.

Bloomfield resident Walt Haim, 25, is optimistic about the final outcome. He attended both meetings and believes the developer will consider the community input and build a positive example of redevelopment.

“All these different neighborhoods that have developments going on can point to this like, ‘This is a win for the community,’” he said. “I think that’s exciting.”