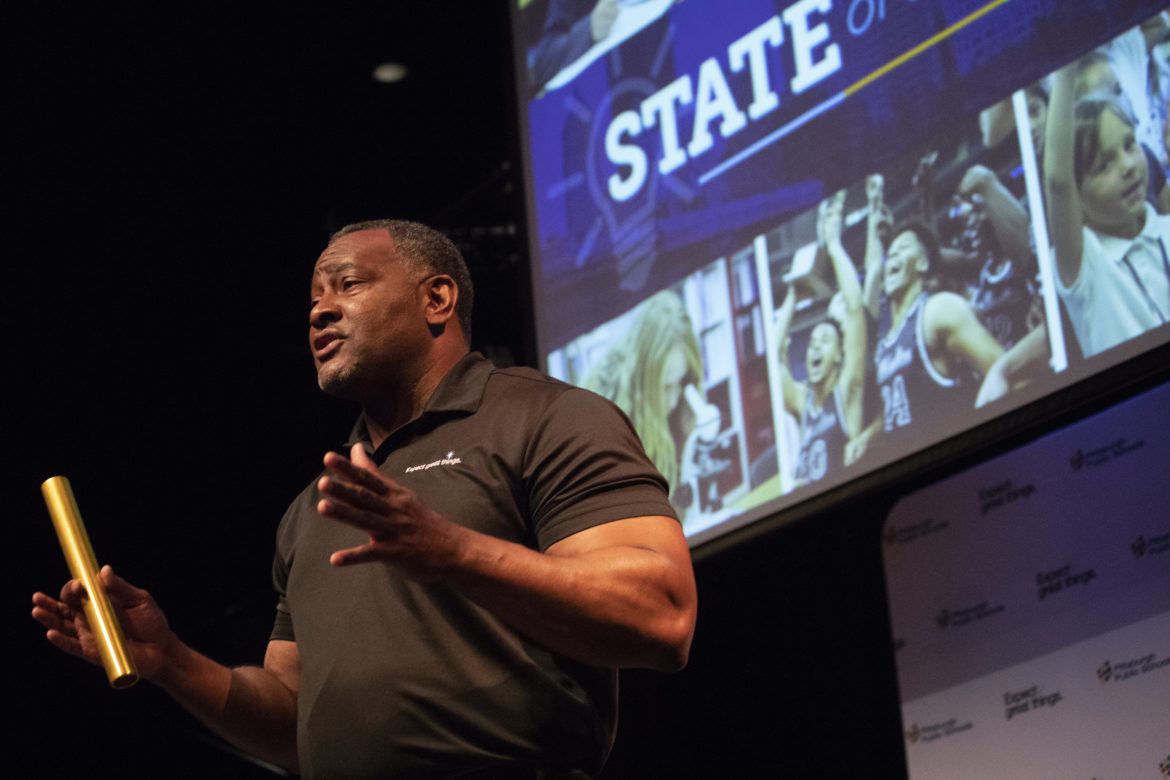 Anthony Hamlet, superintendent of Pittsburgh Public Schools, speaks to an audience at CAPA 6-12 during the State of the District 2018 event on Sept. 18. (Photo by Kat Procyk/PublicSource)

There were smiles all around at the Pittsburgh Public Schools “State of the District” event last week as the audience of district officials, advocates, politicians and foundation representatives watched performances by the Brashear High School Nepali dance team, the Miller PreK-5 African Drummers and the Faison K-5 choir.

But the goodwill generated was not enough to overcome school board president Regina Holley’s concerns about data released during the event that showed test scores across the district are barely moving forward and that a wide achievement gap still exists between black and white students.

“The gap is very wide. It’s not moving fast enough,” said Holley, a retired principal in the Pittsburgh district.

Her comments came despite the theme of the event: “It’s not a sprint, it’s a marathon.”

“As you can see, these numbers are not 100 percent. As an educational organization, we cannot stop."

Among the goals of the district’s five-year strategic plan unveiled by Superintendent Anthony Hamlet in April 2017 is increasing proficiency for all students in literacy and math and eliminating “racial disparity in achievement levels of African-American students.”

Hamlet said that while the persistent achievement gaps are “troubling” and “perplexing,” he plans to “be tenacious to see what we need to do to change that narrative.” He said he wants to focus on moving all students forward.

Data presented at the Sept. 18 event by Anthony Anderson, deputy superintendent of school support and accountability, skimmed the surface of the district’s test results.

He highlighted proficiency rates that are up just slightly from 2016 and 2017 for students in grades 3-8 who took the Pennsylvania System of School Assessment exams [PSSAs] in math and English language arts [ELA] and in grades 4 and 8 in science.

The district used 2016 as a baseline. It is the year Hamlet took over as superintendent in July. 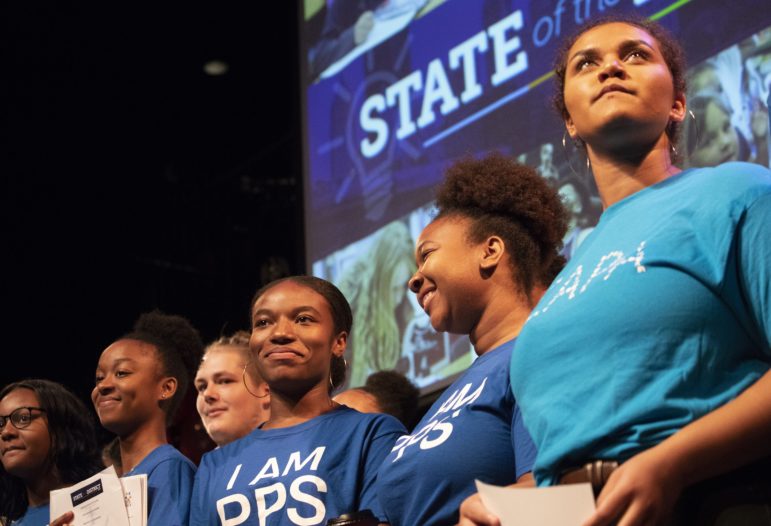 Pittsburgh Public Schools students take the stage during the State of the District 2018 event on Sept. 18. (Photo by Kat Procyk/PublicSource)

The best news of those test results was the third-grade ELA scores, which were up by 11.2 percentage points among black students to a proficiency level of 45.5. Proficiency on the ELA exams, which assess reading skills, is important in third grade because that grade marks the transition from learning to read to reading to learn.

ELA scores for white third-grade students were up 7.3 percentage points to a proficiency level of 75.4 percent.

Hamlet predicted that as the current cohort of third graders moves forward their proficiency rates will rise because of their reading abilities.

In looking at Keystone scores of all students, 61.8 percent scored proficient in literature, 49.6 percent in algebra and 41.9 percent in biology.

Anderson said that while overall test scores in the district are moving “in the right direction,” it’s not happening at a sufficient rate and that black students are not seeing the same improvements as white students.

“As you can see, these numbers are not 100 percent. As an educational organization, we cannot stop,” Anderson said. “We still have a lot of work to do.”

A more detailed look at student achievement can be found in a report prepared for the school board and posted on the district’s website, which breaks down test scores among grade levels, races and other subgroups, which also include English language learners and special education students.

That report, not presented at the State of the District event, shows wide achievement gaps between black and white students in the district at all grade levels. Nearly 53 percent of students in the Pittsburgh schools are black, according to the district’s state School Performance Profile.

While black students saw small increases in proficiency rates on the PSSAs, the achievement gap between them and their white counterparts in grades 3-8 in ELA ranged from about 27 percentage points to nearly 37 percentage points.

In math, the achievement gaps between the races in grades 3-8 range from about 26 percentage points to about 35 percentage points. But a more troubling aspect with the math scores is that they are low across the district — just 28.8 percent of students scored proficient on the PSSAs. The math proficiency rates for all students dropped steadily across the grade levels from 44.7 in third grade down to to 20.3 in eighth grade. Among black students, the math proficiency rate dips into the single digits in seventh and eighth grades, with just 7.9 percent and 9.6 percent proficient, respectively.

“The gap is very wide. It’s not moving fast enough." 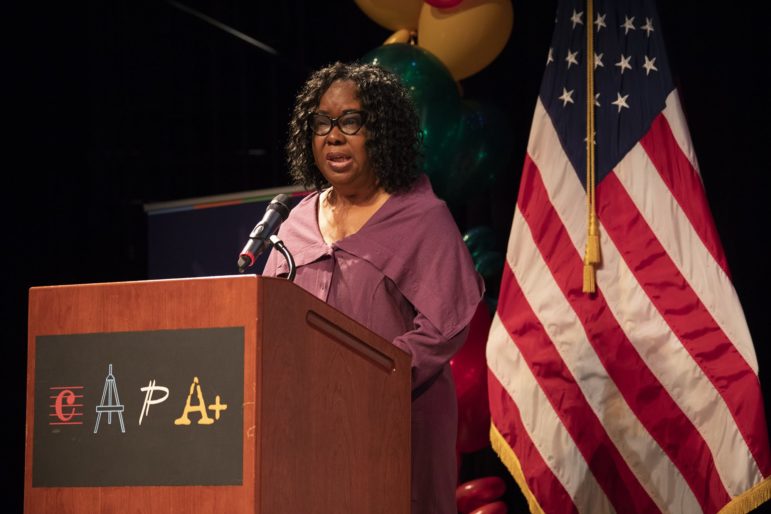 Regina Holley, president of the Pittsburgh Public Schools board, speaks to the audience at CAPA 6-12 on Sept. 18 during the State of District 2018 event. (Photo by Kat Procyk/PublicSource)

Holley said she was especially concerned about the math scores. She and Hamlet cited a new math curriculum for 2018-19 that she hopes will help to improve the scores. Anderson called math “an area of struggle for us as a district.”

Hamlet said students across the state have struggled with the math tests since curriculum was aligned to the PA Core, which teaches math differently than in the past. “Our teachers need to help our students with this,” Hamlet said.

He also cited the need for teachers to undergo professional development targeted specifically to student needs.

For math and ELA, the range of gaps remained relatively stable from 2016, but in some grade levels they increased slightly and in others they decreased.

When broken down by gender, black male students most often had the lowest proficiency rates.

On the Keystone exams for secondary students, the racial achievement gaps are wider than with the PSSAs and are increasing rather than decreasing.

“The overall numbers that we see they are alarming and my hope is the district is looking at what might be some of the root causes for the widening of gaps that occurred last year,” said James Fogarty, executive director of the advocacy group A+ Schools. “It’s moving very much in the wrong direction.”

Proficiency rates on standardized tests for all students in the Pittsburgh Public Schools over three years.

Anderson and Hamlet said one bright spot among the test scores of black students is that more of them are moving out of the ‘below basic’ category — the lowest of four labels given for test results. The others are basic, proficient and advanced. The goal is for all students to become proficient.

Holley said she was encouraged by test scores that showed a handful of schools improved significantly. Among those she cited were Arsenal PreK-5 and 6-8 and Weil, Montessori, Lincoln and Fulton, which are all PreK-5 schools.

District spokeswoman Ebony Pugh said board members viewed preliminary data broken down by school but that the information is not yet finalized and ready for public release. She said it will likely be released next month by the state and district.

The district, Holley said, is trying to provide the supports needed to improve achievement by including more planning time for teachers, summer programs for students and partnering with outside agencies.

“There are a lot of people out there working on this,” she said. “It’s not something that’s easy to do, but it’s something that has to be done.”