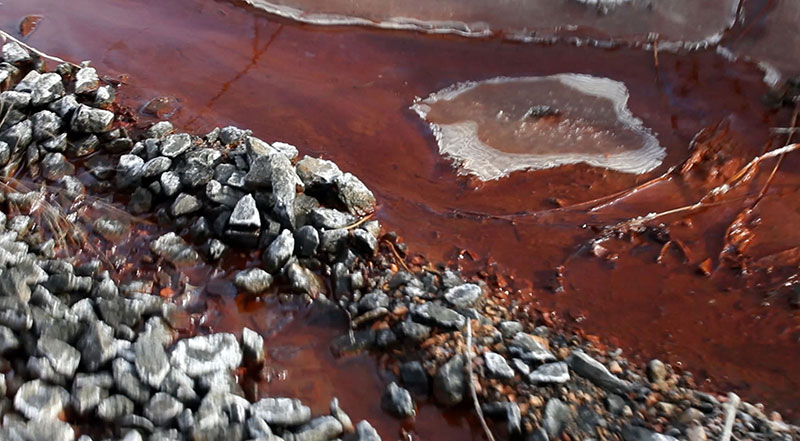 A conservation group plans to sue the owners and operators of a water treatment site at an abandoned mine in Southwestern Pennsylvania for allegedly discharging acid mine drainage into a Monongahela River tributary without the required permits.

“If the state will not address these pressing environmental issues, we as citizens will do so in order to protect Pennsylvania’s right to clean water and enjoyment of our natural resources,” said Ken Dufalla, head of the Izaak Walton League’s (IWL) Harry Enstrom Chapter in Greene County.

Water from the abandoned Clyde Mine is treated at a facility and then drained into Ten Mile Creek in East Bethlehem Township, Washington County. The creek flows into the Monongahela River, a source of drinking water for hundreds of thousands of people in the region.

The league has said for years that, based on water testing, they believe the mine is spewing high levels of pollutants into Ten Mile Creek and may be affecting aquatic life and drinking water.

Last week, the group sent a letter of intent to file a federal lawsuit against the Clean Streams Foundation and AMD Industries for alleged violations of state and federal environmental laws for operating the Clyde Mine Water Treatment Plant without a discharge permit.

The Clean Streams Foundation is a nonprofit that acts as trustee for funds to treat abandoned mine water when coal companies go bankrupt in Pennsylvania, Ohio, Kentucky and Tennessee. It’s a trustee for the fund for Clyde Mine, whose original owners went bankrupt in 2000.

The Commonwealth of Pennsylvania is designated as the trust’s beneficiary, so the state Department of Environmental Protection decides how the money is spent, said Dean Hunt, administrator of the Clean Streams Foundation.

A DEP official said the department is currently reviewing the letter and, therefore, would not comment. PublicSource gave the DEP additional days to review the letter, but the agency still declined to comment.

AMD Industries is contracted to run the treatment plant, where some pollutants are stripped from the mine water before it enters the Ten Mile Creek. The California, Pa., company did not return phone calls before deadline.

The Pennsylvania Clean Streams Law and the U.S. Clean Water Act require wastewater dischargers to have a National Pollutant Discharge Elimination System (NPDES) permit that limits how much pollution can enter a state waterway and triggers monitoring and reporting requirements. In Pennsylvania, the DEP issues those permits.

The IWL said they couldn’t find such a permit for the Clyde Mine.

“After many file reviews and a Right-to-Know request to the DEP, we have been unable to identify any authorization for these discharges and, as a last resort, had to initiate the process of filing a lawsuit,” said Dallas Slagle, an IWL member.

Hunt, of the Clean Streams Foundation, said it’s true that the Clyde doesn’t have an NPDES permit because the coal company that used to own the site abandoned its permits when it went bankrupt.

“It’s a legal question whether the state is required to obtain permits on abandoned sites,” he said. “At this point, we do what the state tells us to do.”

Hunt said the Clean Streams Foundation would wait to see how DEP officials want to handle the situation.

IWL members said they’re hoping the threat of a lawsuit will trigger the DEP to initiate the NPDES permitting process and give citizens a chance to provide comments on pollution limits.

“I think it's important that this facility, just like any other facility discharging to a public waterway, is permitted,” said Ryan Hamilton, an attorney with Fair Shake Environmental Legal Services, who is representing the IWL in the matter.

How the Clean Streams Foundation came to “own” the mine is complicated. The Clyde Mine was active for most of the 20th century. Then, like with many legacy coal companies, its one-time owner, LTV Steel Company, went bankrupt in 2000. Bankruptcy proceedings created a pool of money to continue treatment of acid mine drainage at the Clyde Mine and other mines they owned.

The U.S. Clean Water Act allows citizens to file suit in federal court against alleged violators of the law, but it requires a 60-day letter of intent to sue.

If no action is taken by the DEP to start the permitting process at the end of the 60-day period, the group said it will file the civil suit against the Clean Streams Foundation and AMD Industries in the United States District Court for the Western District of Pennsylvania.

Water samples collected by the IWL’s citizen water testing initiative have indicated for years that the mine water contains high levels of bromide, a naturally occurring salt, and other metals and chemicals. DEP water tests have also shown high bromide levels.

One of the group’s main worries is that bromides are entering the Tri-County Municipal Water Authority a few miles downstream on the Monongahela River. Bromides are pretty much harmless until they’re mixed with chlorine at drinking water treatment plants, where a chemical reaction creates carcinogenic trihalomethanes. Tri-County has been cited multiple times over the past several years for exceeding trihalomethane limits, but the DEP has never linked those issues to the Clyde Mine.

Bromides are not typically associated with mine discharge water, scientists told PublicSource, but are typical of fracking wastewater.

Some IWL members believe frack wastewater is being dumped into abandoned mine shafts in Southwestern Pennsylvania.

In 2012, a Greene County businessman was convicted of dumping millions of gallons of frack wastewater into abandoned mine shafts, streams and on roadsides.

The DEP is currently investigating whether there is Marcellus Shale fracking wastewater present in the Clyde Mine and Ten Mile Creek. In mid-June, DEP officials took samples of water, sediment, vegetation and fish at 13 sites in the area, including at the Tri-County Municipal Water Authority. They’re testing for a number of radioactive elements, bromides and other chemicals associated with shale drilling wastewater.

The investigation was started more than a year after the DEP took preliminary samples of the mine discharge that showed radium 226 and radium 228 levels were more than 60 times higher than allowed by safe drinking water standards.

However, recent sampling done by West Virginia University researchers found radioactive elements were at safe levels in both the creek and the Clyde Mine. Researchers there have said they suspect the DEP used flawed methods for its 2014 sampling that led to inaccurate results. Other university scientists have tested the waters but have not yet released results.

The DEP is overdue on releasing its results from the June testing. It originally said it would release results in September.