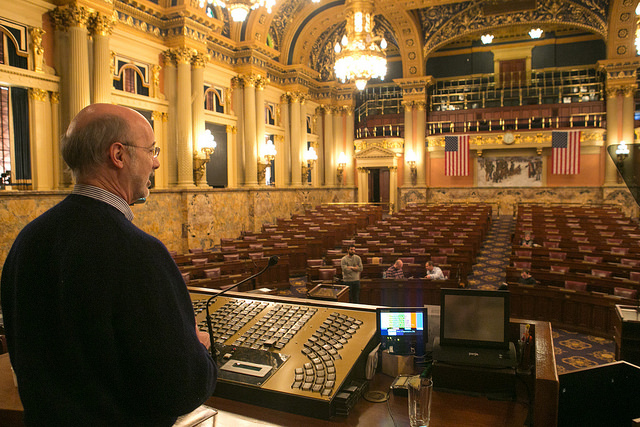 As members of the Legislature jeered Gov. Tom Wolf’s assertion that House Republicans walked away from budget negotiations in December, it appeared that open wounds from an unfinished budget may taint the clean budgeting slate that was supposed to start Tuesday.

“I understand the frustration you all must feel looking at this huge mathematical problem,” Wolf said. “But yelling will not make it go away.”

Facing current and projected budget deficits, Wolf urged the Pennsylvania Legislature to confront a looming financial crisis as he presented a $32.7 billion budget for the 2016-17 fiscal year.

The Independent Fiscal Office said there was a $318 million deficit in the current year’s budget, and a nearly $1.9 billion deficit projected for 2016-17.

On Dec. 29, Wolf line-item vetoed nearly $7 billion in state spending, approving $23.4 billion out of the $30.3 billion budget. This year’s budget is now seven months past its June 30 deadline.

Wolf’s second budget is an 8 percent increase over the 2015-16 budget passed by the Legislature.

Recognizing the odd circumstances of his speech — presenting a new budget with last year’s budget unfinished — Wolf began by saying, “This will not be an ordinary governor’s budget address.”

The last time the Legislature was considering two budgets simultaneously was in 1971. The budget mess contributed to 38 percent of respondents saying the state’s biggest problem was its government and politicians in a Franklin & Marshall College poll from late January.

Wolf’s second budget proposes many of the same items, in a more limited fashion, that were rejected in his first budget, although they weren’t mentioned in his speech.

“I have to admit I've never seen a budget address that didn't actually talk about a budget,” House Majority Leader Dave Reed, R-Indiana, said during the Republican response.

Wolf proposed increasing the personal income tax from 3.07 percent to 3.4 percent, which would raise an additional $1.3 billion from taxpayers. Income from lottery winnings would also be taxed at 3.4 percent under Wolf’s proposal.

“We do not believe we should have a broad-based tax increase to balance this budget,” Reed said.

House Speaker Mike Turzai, R-Allegheny, said the Republican members of the Legislature talk to constituents who are adamant about not raising taxes. “And with all due respect, I think the governor is out of touch with those folks,” Turzai said. “I don’t think he’s out and about like we are.”

Wolf also has a new severance tax proposal that taxes 6.5 percent of the value of natural gas. But, the amount a company has paid in impact fees would be taken as a credit against the 6.5 percent rate. The tax would generate more than $200 million.

For the second year in a row, Wolf proposed an increased tax on cigarettes and new taxes on loose tobacco, cigars and e-cigarettes.

Wolf proposed spending an additional $200 million for K-12 education in next year’s budget. Wolf proposed a $377 million increase in basic education spending that never passed in his first budget.

Penn State and Pitt have not received any state money for the 2015-16 fiscal year. Funding for basic K-12 education and state correctional facilities were only approved for the last six months of 2015. Whether those portions of state government actually receive budget increases will be determined by future supplementary budget agreements.

Reed said the corrections budget should move out of the House to the Senate this week. He said they were working on the other items.

Wolf also wants to move the Pennsylvania eHealth Partnership Authority into the Department of Human Services for an estimated savings of $1 million. The authority has nine employees and works to enable the secure exchange of electronic medical information.

Budget hearings are scheduled from Feb. 22 to March 10, according to the House calendar.