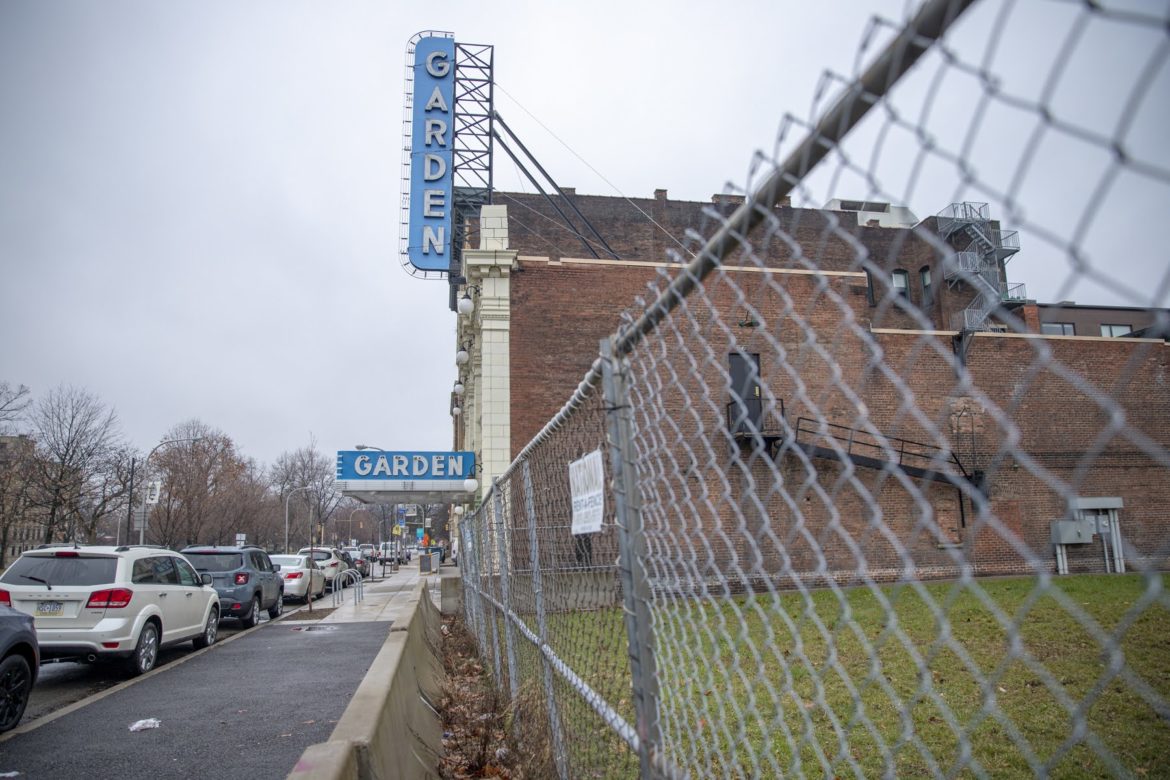 The former Garden Theater and nearby lots have been in limbo for years, with a development plan now moving forward. (Photo by Jay Manning/PublicSource)

After decades in limbo, with numerous legal challenges surmounted, redevelopment of the remaining lots of the Garden Theater block in the Central Northside is expected to begin in July or August.

The construction of a five-story apartment building with street-level retail will replace what is now a grassy corner of four lots at West North Avenue and Federal Street.

Rick Belloli, principal of Q Development, said recently that the project has jumped its legal hurdles and made it through every public review process. Q Development is a partner of TREK Development Group on the project. If construction starts according to plan, it will be completed by the end of 2022 or early 2023, he said.

This next step has been decades in the making. Numerous developers tried and failed to move the project forward since 2007. TREK and Q Development committed to the project in 2014, but years of legal appeals required design iterations and delayed their plans. What had been proposed five years ago as an eight-story building will now be a five-story building with between 47 and 50 apartments.

“We still have some budget crunching to do because costs have gone up because of COVID-19,” Belloli said. “Plywood went from $7 a sheet to $20 a sheet because wood mills got shut down, so supply went down but demand went up with people wanting decks and such. We are making modifications to minimize the need for plywood.”

The new building will include street-level retail and connect on the mezzanine level to the Garden Theater to accommodate three studio apartments above the old theater. The theater space was modified for a restaurant tenant at street level by a previous developer, and TREK and Q Development completed the exterior renovation in 2019. 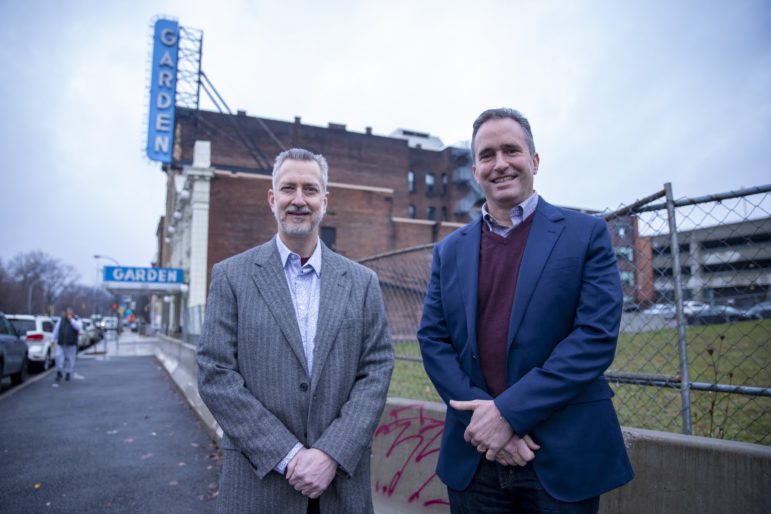 Rick Belloli (left), principal of Q Development, and William Gatti, president and CEO of TREK Development Group, near the site of the former Garden Theater. (Photo by Jay Manning/PublicSource)

In 2015-16, the former Masonic Temple beside the theater was redeveloped and is now the home of City of Asylum’s Alphabet City and its bookstore. The Bradberry apartment building behind Alphabet City was also renovated during the same time period.

All that’s left is the corner lot at West North and Federal — so long blighted and now a stretch of grass inside a chain link fence.

Barbara Talerico, a former president of the Allegheny City Central Association, said the importance of getting this construction started cannot be overstated.

“Corners are the most important properties because they signal what the rest of the neighborhood is like,” she said. “Right now, it’s a sad empty space, with a chain link fence and litter. There is such anticipation for this, to show that the North Side is capable of accomplishing great projects. That corner is important for the aesthetics and for public safety.”

Andrés Franco, executive director of City of Asylum — a program that houses writers who were endangered in their native countries and holds an annual jazz-poetry concert, along with numerous arts programs — said the corner is an important portal to the Central Northside and that its redevelopment will be an asset to his organization.

“It will help the whole neighborhood because the retail will increase traffic,” Franco said.

He said he expects a restaurant tenant to occupy the space inside Alphabet City that was left empty when Brugge on North closed last year.

“That’s the plan,” he said. “By the time everything else opens, I’m sure we will have a restaurant in place.”

Over the years, restaurateurs who showed initial interest in opening an eating establishment on the ground floor of the theater backed out. Before the properties beside the theater were demolished, the developers had stated that prospective tenants were concerned about the precariousness of the one adjacent to and towering above the theater.

“We have had a couple of prospects along the way, but with uncertainty about the construction, we put [marketing the theater] on the back burner,” Belloli said.

He said the development team will actively seek a tenant once the construction is nearing completion.

A rendering of the planned redevelopment of the Garden Theater block. (Image from gardenblockpgh.com)

Various developers tried and failed to complete the block’s redevelopment, and the neighborhood abided. The legal challenges over previous zoning decisions came from Stephen Pascal, who owns properties in the Central Northside and Deutschtown. He had challenged the Zoning Board of Appeal’s approval of the original proposal for eight stories. He and another appellant, David Demko, also challenged the proposal to demolish the three old buildings, citing the need for preservation. Demko did not continue with his appeal. Pascal could not be reached for comment.

The URA had three historic structures, 4-6-8 West North, demolished in 2019 after years of efforts to incorporate them, or at least their facades, into the final design of new construction.

The properties suffered the delays so much that preservationists from Preservation Pittsburgh and the Young Preservationists Association, who had actively sought to save them, had changes of heart after touring them.

The overall project includes the build-out of nine apartments in the Morton House, a stand-alone structure on Federal Street across the alley, Eloise Way, behind the proposed new building.

The developers have arranged for 100 spaces in a nearby parking garage for tenants to use as part of their apartment lease. Rents will range from $1,000 to $1,300 for a studio apartment to $3,600 for a three-bedroom apartment.

“The biggest aesthetic change is that the rooftop balcony will probably not survive” because of costs, Belloli said, adding that some apartments will have balconies.

Neighborhood residents who have longed to see the block become lively again say they are relieved and excited that the new construction will finally move forward.

“We were all really heartened to hear the news,” said Maggie Connor, president of the Allegheny City Central Association. “Obviously with a heavy knock on wood, I don’t anticipate any problems now. It’s so nice to be on the other side of these legal issues, and the idea that we will see actual progress is really uplifting.”

“It is such a relief that the hurdles have finally been overcome,” Talerico said. “We are thrilled that they have worked with the community on redesigns and astounded that they stuck with us as long as they did. When they break ground, there is going to be a big celebration.”

Diana Nelson Jones is a freelance writer based in Pittsburgh. Send comments on this story to info@publicsource.org.

This story was fact-checked by Danielle Cruz.