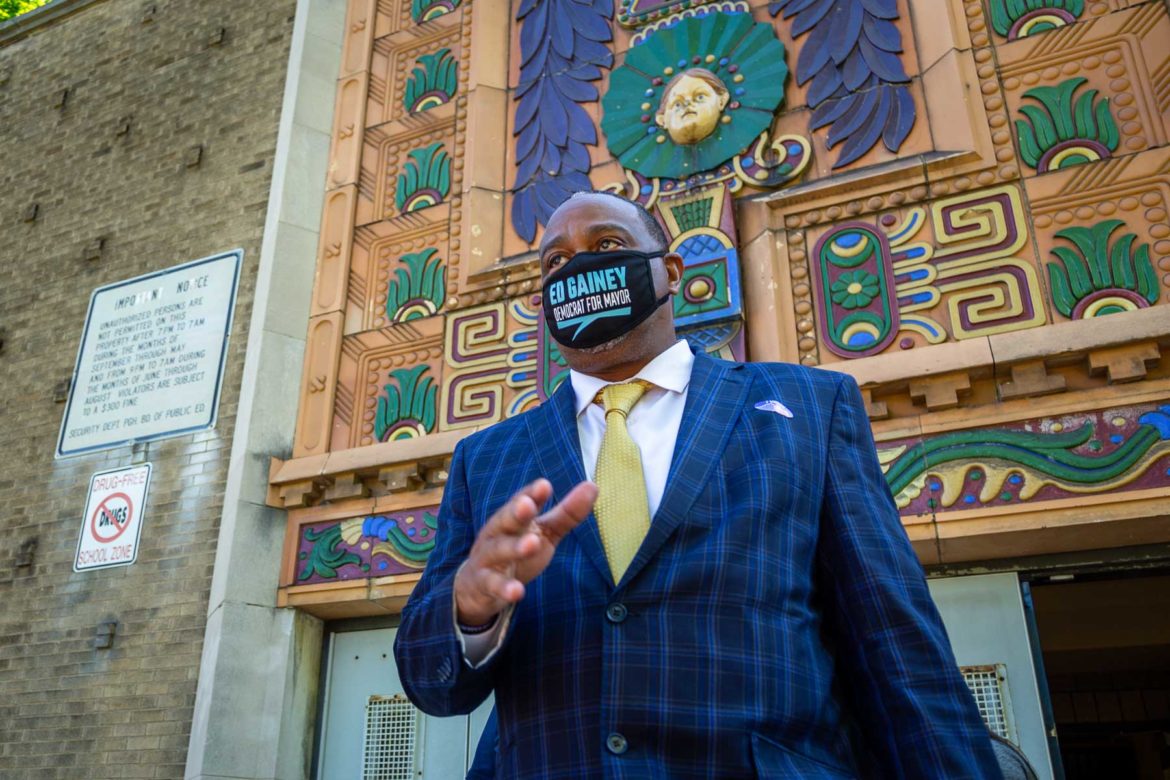 Ed Gainey, the Democratic nominee for mayor of Pittsburgh, after voting in the May primary election. (Photo by Nick Childers/PublicSource)

It’s been three months since state Rep. Ed Gainey won the Democratic primary for mayor of Pittsburgh, defeating two-term incumbent Bill Peduto. With more than two months until the general election and more than four months until the next mayor will take office, Gainey is in a strange position. He is the overwhelming favorite to win the November election but can’t start a transition.

His campaign has mostly been quiet through the summer, except for occasional written statements and unannounced appearances at community events. PublicSource interviewed Gainey on Monday and asked him how he views several key issues facing the city, including the use of relief funds, municipal consolidation and COVID-19 vaccination efforts.

Gainey made UPMC, the dominant healthcare and hospital provider and the region’s largest employer, a main character of his campaign. He ran on the promise that he would try to make the nonprofit with revenues in the billions pay “their fair share” in taxes, after a decade during which two mayors ultimately failed to do so. He also says he wants UPMC hospital employees to be able to unionize.

Gainey did not detail how he would accomplish that as mayor when asked Monday. He acknowledged and congratulated Leslie Davis, who recently took over as CEO of UPMC. “With new leadership comes new direction,” Gainey said. “I’m looking forward to having a conversation with her first, to find out how we can get that done.”

Gainey’s aspirations are not new for the city. Mayor Luke Ravenstahl (served 2006-2014) took the city into a lawsuit against UPMC to try to take away its tax-exempt status. Peduto tried a different approach, using the OnePGH program to spur voluntary community investments from large local nonprofits including UPMC.

When asked why Pittsburgh should expect him to achieve a different outcome than the two most recent mayors, Gainey said: “Why should people believe? I can’t answer that. But I’m going to give the best effort I can, and we’re going to do what’s necessary to make that happen. But to answer more directly, I would hope that [UPMC] would want that relationship. I would hope that they see that this is something that is beneficial to the city.”

Gainey found himself in a unique political situation this summer when a Wilkinsburg group announced an effort to merge the borough into the city. Gainey is the state representative for Wilkinsburg and part of the city but could soon resign to serve as Pittsburgh’s mayor.

As the Wilkinsburg Community Development Corporation [WCDC] campaigned for the merger and the Wilkinsburg Borough Council came out fiercely against it, Gainey mostly stayed quiet. He said Monday that Wilkinsburg residents should make the decision for themselves, and that if they opt to join Pittsburgh, he would welcome that as mayor.

The WCDC announced a plan in June to get the issue on the ballot in November but later pulled their petition and said they would delay the process temporarily.

Gainey said feelings were split in the community.

“It depends on who you talk to,” Gainey said of what he’s heard from his Wilkinsburg constituents on the matter. “A lot of people have a lot of history in Wilkinsburg, and they want it to remain its own borough … I don’t want to politicize that. I think that’s something that they are going to have to ask themselves.

“There should definitely be a serious conversation before anything else happens.”

City Controller Michael Lamb said in June that municipal consolidation is “a conversation that we, as a region, need to have all the time.” Allegheny County is one of the most fragmented in the country with more than 130 municipalities. Gainey said Monday that there needs to be conversation going forward, but he has not studied the matter closely yet.

Gainey said Monday that “everyone should get vaccinated” against COVID-19. He said he would be interested in looking into vaccine rules recently enacted by New York City, which require anyone patronizing an indoor restaurant, bar or gym to show proof of vaccination. (Under state law, the city government cannot make this decision directly, but the county could.)

“I want you to be vaccinated if you go in a restaurant, absolutely,” he said. “If what’s going on in New York is helping move society forward, absolutely that’s something that we’ll look at.”

He addressed vaccine hesitancy in the Black community, acknowledging the painful history of doctors and researchers mistreating Black Americans as a source of mistrust.

“I understand, particularly in the African-American community, where they’re saying ‘We’ve heard it all before’ and ‘Look what happened to us,’ and I get it. I do. But when you have the scientists and everybody, all races getting it, I think it speaks volumes to the importance of being vaccinated.

“I understand the past, and I have tremendous respect for it. And even in that, I got vaccinated.”

Preparing to be mayor

Gainey insists he’s “laser focused” on the November election, not taking victory over Republican candidate Tony Moreno for granted. But in a city that has elected Democratic mayors since the 1930s and where President Joe Biden collected about 80% of the vote in 2020, Gainey is more than just a candidate. He is the presumptive next mayor, barring a historic electoral aberration.

“We’re beginning to jot things down,” Gainey said. “We don’t want to act like because we won a primary that anything is guaranteed to us.”

A key facet of any new administration is its relationship with City Council. The 2021 primary was a rare political rupture for the all-Democratic Pittsburgh government: Eight of nine council members endorsed incumbent Mayor Bill Peduto and now are faced with governing alongside a new mayor who they tried to keep out of office.

Gainey said he has been meeting with council members and has told them he wants to put the primary campaign behind them. 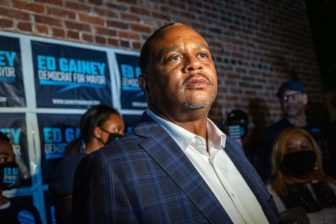 State Rep. Ed Gainey ousted Mayor Bill Peduto in the Democratic primary and is on course to be the city's first Black mayor. (Photo by Nick Childers/PublicSource)

“Everybody had to do what they had to do,” Gainey said. “I’m not focused on who supported me back then and who didn’t, for whatever reason … My meeting with them was to let them know that I understand, but I would love to have their support going forward.”

Council members have sounded open to working with Gainey, and Council President Theresa Kail-Smith congratulated him on his primary win in a council meeting in May. In an early test of their relationship, council ignored Gainey’s call to slow down the process of appropriating federal COVID relief money, choosing instead to quickly pass Peduto’s spending plan despite fierce opposition at public hearings.

Gainey told PublicSource in May that he would not weigh in on the process and that he would respect the remainder of Peduto’s term as mayor. He appeared to change course when outcry from activists grew in July as council considered a spending plan that the mayor’s office released before receiving public comment. Gainey issued a brief public statement calling for council to delay their vote and receive more public input. His message echoed that of his only endorser on council, Councilwoman Deb Gross, who had already called for a delay and was eventually the only member to vote against the spending plan.

Gainey said Monday that he spoke out only regarding the process of the plan and did not expect the Peduto administration to give him any input on its substance.

“I still stayed away from it,” Gainey said. “What I did was I felt like there needed to be more transparency. A lot of groups still had questions. I believe that if you want to bring a city together, that transparency has to be there.”

Council members have said they are looking forward to working with Gainey if he is elected and that the next mayor will have the opportunity to propose amendments to Peduto’s COVID relief spending plan.

When asked how he would like to amend the plan if elected, Gainey said his team is still in “beginning stages” of considering the matter but there has to be “a piece that speaks directly to the spike in violence.”

A lack of transparency was among the most common public complaints about the current administration’s federal relief allocation plan. A city task force was announced in April but made no announcements and held no hearings. A complete, four-year spending plan was sent from the mayor’s office to City Council in July, and more than 80 residents spoke at two public hearings, most saying they felt the public was shut out of the process. Gross said she opposed the plan because council was not in a position to know what residents’ needs were without more time to get feedback.

Gainey said Monday he would try to boost city government transparency by having more neighborhood meetings. “You always want to get buy-in,” Gainey said. “You’re never going to get 100% of the people on your side, but you want to show people that I’m out there listening to you.”