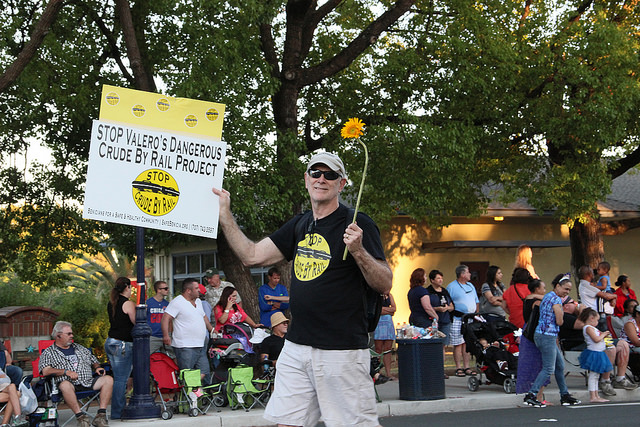 A man holding a sign that says STOP Valero's Dangerous Crude by Rail Project and a flower.

The price of crude oil had its best day since February 2009 on Friday, hitting a 13 percent increase at its peak. But this was a bounce back from the day before, when crude oil reached a 12-year low of $26.21.

Overall, the oil market has dropped by 75 percent since mid-2014, sending global oil companies and the U.S. stock market into a frenzy.

Crews began cleaning up a Feb. 10 Union Pacific derailment in American Falls, Idaho, on Friday. About 30 cars derailed on Wednesday morning near a fish hatchery in the area, spilling soda ash, a chemical used to make glass.

No one was hurt in the crash, but environmental officials warned that if the soda ash had leaked into the hatchery it would have left a wake of dead fish and environmental concerns.

California’s Benicia city planning commission voted unanimously to deny the request from Valero Refining Company to build a loading station in the area. The company was planning to import oil through Northern California on two 50-car trains every day.

Despite Valero being the area’s largest employer, and four nights of hearings on the matter, the planning commission ultimately felt the crude-by-rail industry was too hazardous for the community.

The Utilities and Transportation Commission in Washington adopted a set of rules for crude-by-oil transport on Feb. 9. The new requirements include inspections of private crossings, minimum safety regulations and mandatory financial verification for all railroads that haul crude oil to ensure that they can address a worst-case oil spill.

The new rules go into effect March 11 and allow cities with a population of more than 10,000 — which are exempt from the regulations —  to opt into the crossing inspection program.

See PublicSource’s story about other states that have passed laws surrounding crude-by-rail traffic.

A CSX Transportation train in Marysville, Ohio, hit a station car on the morning of Feb. 9, derailing 10 engine cars and sending two CSX employees to the hospital. Some fuel spilled, according to the Union County Emergency Management Agency, and the two injured are in stable condition.

Environment and Energy Publishing notes that pipelines have become a favored alternative to the crude-by-rail process of oil shipment. Oil from the Bakken shale in North Dakota has dropped to 330,000 barrels per day — a decrease of over 100,000 barrels since November, according to Bridget Hunsucker, publications director at energy research firm Genscape Inc.

The falling rates of crude oil are having a disastrous effect on the rail industry. "That's just how the economics work,” Hunsucker said. “If you can get on a pipeline, you would want to.”