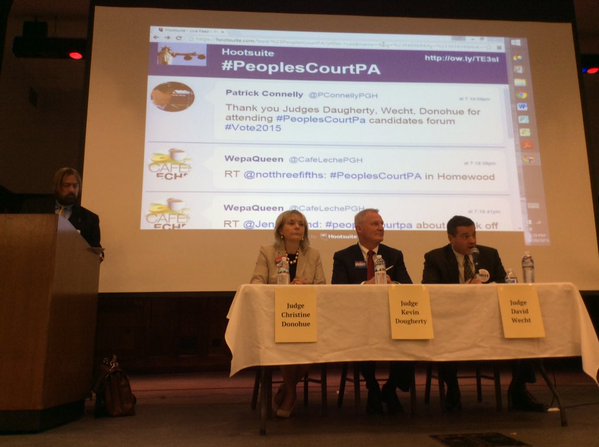 Three of the seven candidates for the Pennsylvania Supreme Court appeared “in the light,” as one candidate put it this week in Pittsburgh, to be transparent and to answer questions from voters.

And they received a mountain of questions (more than 40) from a packed auditorium at the Homewood branch of the Carnegie Library of Pittsburgh Tuesday night.

While judicial elections often have low voter turnout, the forum attendees were engaged with the candidates.

“Everybody gets the opportunity to see us,” Donohue said. “The unfortunate part is that not enough people take the time to get to know who the candidates are and what our qualifications are. But the opportunity is there…”

Merit selection, which involves the appointment, rather than election of judges, is currently being considered as a constitutional amendment by the Pennsylvania Legislature.

The House version of the bill passed with a 16-11 bipartisan vote of the House Judiciary Committee on Tuesday, which is one of the first steps in a very long process.

The most common system in the country — done by 22 states — begins the judicial appointment process with a bipartisan commission that sends nominations to the governor.

“We, the people, have a right to elect our judges and constitutional rights should not lightly be taken away by somebody saying, ‘We know better than you,’" Wecht said.

He added: “We haven't been picked behind closed doors. We're out here in the light so you can see us (and) you can hear us..."

While not every voter can attend a forum in Pittsburgh or in Reading, Pa., to hear candidates in person, all seven candidates for the state Supreme Court appeared at a televised forum on Oct. 14.

The forum opened with discussion of the scandals that have created two of the three openings on the court and the recent release of racist and sexist emails from sitting Supreme Court Justice J. Michael Eakin.

Philadelphia County Court of Common Pleas Judge Paul Panepinto, the independent candidate, said the state Supreme Court shouldn’t be involved in the process of investigating a sitting member of the court.

Superior Court Judge Judith Olson agreed, saying the Judicial Conduct Board was created by a constitutional amendment in 1993 to review cases of judicial misconduct.

One result from the recent scandals is that many of the TV ads by the candidates have focused on integrity and professionalism, said Laurie Kinney, communications director for Justice At Stake, a Washington, D.C., group that tracks TV ad spending, in an interview earlier this month.

Pennsylvania is one of eight states that elect judges through partisan elections where judges must run with a party label. However, none of the candidates felt this would be an issue when it gets down to deciding a case.

“I have been endorsed by both business and labor,” said Commonwealth Court Judge Anne Covey, a Republican. “I have seen favor by both parties and I agree that justice serves all, and it’s not along party lines.”

George said it was unfortunate that party affiliation is a litmus test for so many voters given the current mess on the Supreme Court. “We've got to start putting people in office based upon their experience, their credentials, their value set, not because they're Republican or Democrat,” he said.

Gerrymandering and the role of the Supreme Court

At the Homewood forum, the candidates were quite candid.

Donohue said she would support the precedent set in the landmark abortion rights case Roe v. Wade. Dougherty talked about creating a court to not criminalize victims of sex trafficking, and Wecht mentioned the work he did in law school on the “serious problems with the prison privatization movement.”

The three Democratic candidates also spoke about gerrymandering in Pennsylvania and the Supreme Court’s role in the process of creating congressional districts.

Pennsylvania’s 7th Congressional District was rated the fourth-most gerrymandered district in the country by The Washington Post. The 7th district snakes around an area just west of Philadelphia and looks like “Goofy kicking Donald Duck.”

“Everybody in this room should be angry about how gerrymandered we are,” Wecht said. “Understand, sitting here in the city of Pittsburgh, your vote is diluted. Your power is taken away from you.”

He said voters in rural, Republican districts are overrepresented in the current district map.

Wecht and Donohue explained how the Pennsylvania Supreme Court appoints the fifth and final member to the Legislative Reapportionment Commission, the group that draws the district lines, if the leaders of the state House and Senate can’t agree on a selection.

The state Supreme Court also reviews any challenges to the district lines drawn by the commission, meaning the court could potentially influence the process twice.

Donohue said if voters selected all three Democrats on Election Day, all the court would need to do is apply the law.

“And gerrymandering will come to an end,” she said.