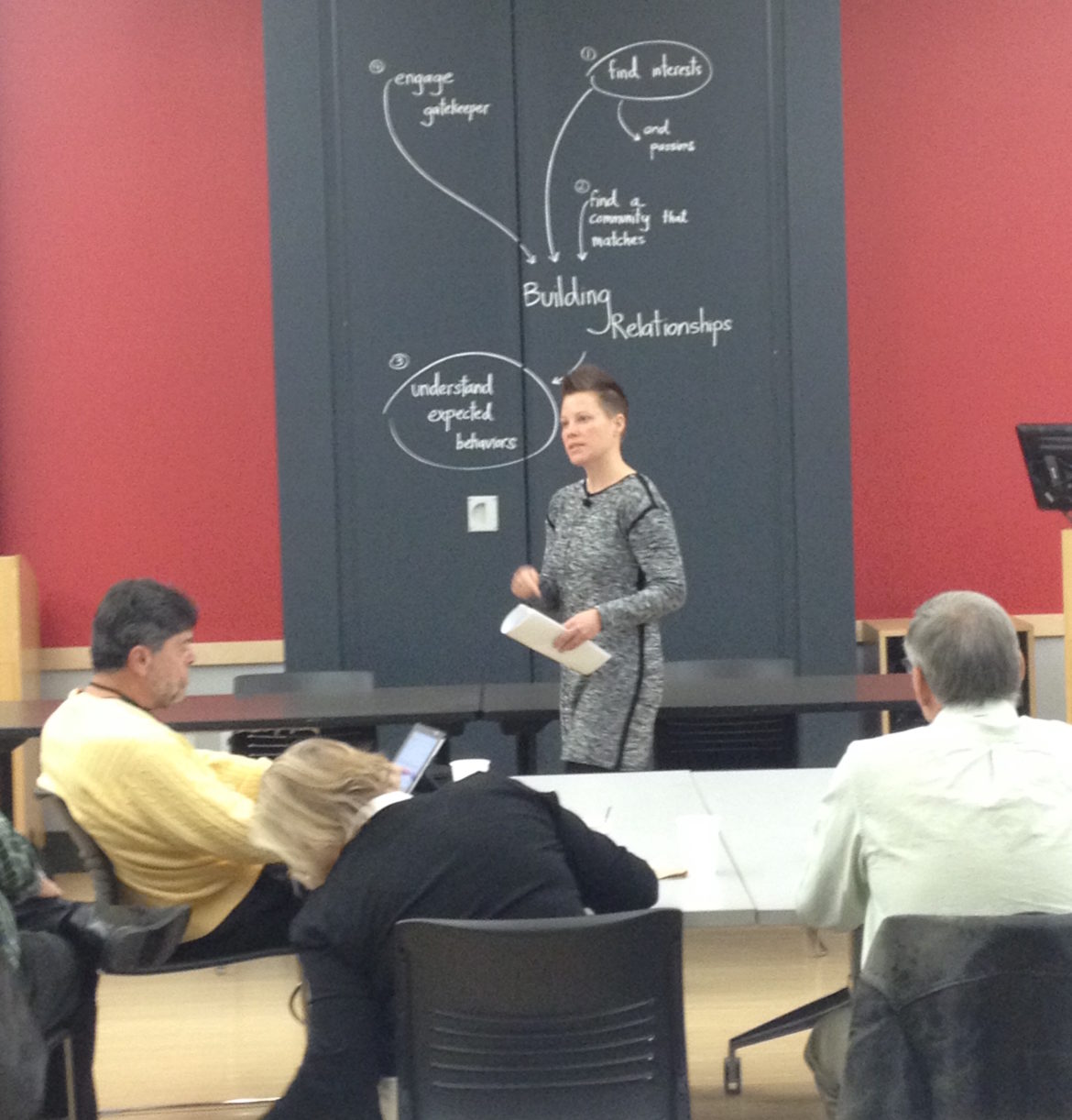 Nancy Smith speaking at the CLASS building in Regent Square.

Nancy Smith first noticed something missing from existing programs on domestic and sexual violence when she was working at an Ohio YWCA in 2001.

While collaborating with an independent living center near the YWCA, she learned that almost every person the organization was serving — people with disabilities in the community — had a history of sexual violence.

“I was stunned,” Smith said. She had a master’s degree in women’s studies, worked with survivors of sexual assault and studied oppression of women and people of color, but said she had “never, ever thought about domestic and sexual violence against people with disabilities.”

The FISA Foundation, an organization dedicated to supporting nonprofits for women, girls and people with disabilities, invited Smith to speak Friday morning. Smith now directs the Center on Victimization and Safety at the Vera Institute of Justice. Around 45 representatives from organizations all across Pittsburgh came to Community Living and Support Services in Regent Square to learn how to incorporate the needs of people with disabilities into already existing abuse prevention programs.

Along with Smith, representatives from the National Multiple Sclerosis Society, The Arc of Washington County and NHS Allegheny County Schools spoke about an often unrecognized at-risk population for abuse.

“As a society, still too often we forget about people with disabilities when we’re making decisions,” Kristy Trautmann, the executive director of the FISA Foundation, said. “This is the beginning of the conversation.”

According to the Bureau of Justice Statistics, 60 out of every 1,000 people with disabilities were survivors of nonfatal violence from 2008 to 2012 — three times the rate of people without disabilities.

Based on statistics like these, the Vera Institute started a program in 2005 called End Abuse of People with Disabilities. The project is dedicated to raising awareness and partnering with existing organizations to focus on people with disabilities who are at risk of violence.

Smith said people with disabilities are often most vulnerable because they have to rely on other people’s help to make phone calls or leave their homes. Almost half of the perpetrators, according to the Office of Victims of Crime, provide care to the person they’re abusing.

“We have done such a great job of thinking, ‘How do we get information to people who are at risk?’” Smith said, talking about solutions that remove people from danger without alerting their abusers. “How do we [now] hold safety and how do we hold accessibility at the same time?”

Milton Henderson, an independent living specialist at the Three Rivers Center for Independent Living, said the presentation was informative. He didn’t know that people with cognitive disabilities cannot legally consent to sex — a law that Smith said has good intentions but also a negative effect on people with disabilities who want to engage in healthy relationships.

“I wasn’t totally aware of that,” Henderson said. “[Another thing] that gets me is that when you have organizations where laws are broken, law enforcement is never called sometimes...that’s neglect also.”

Smith has worked with organizations across the country implementing training procedures to recognize the signs of abuse in people with disabilities.

She said she’s been to schools that offer curriculum on sexual assault and dating violence to every student except those in special education classes.

“When we look at where efforts take place,” Smith said, “they’re not [happening] in places where people with disabilities come together.”

To demonstrate the kind of collaborative programming that Smith advocates for, representatives from the Multiple Sclerosis Society of Western Pennsylvania talked about how they’ve integrated abuse procedures into their existing infrastructure for treating multiple sclerosis (MS).

In 2005, Amy, a woman with MS who uses a wheelchair, sought help from Anne Mageras, the president of the Western Pennsylvania chapter of the National Multiple Sclerosis Society. Amy’s husband, who was also her caregiver, had been sexually abusive and was denying her proper medical treatment.

She couldn’t tell Mageras about her husband over the phone because he was standing in the room with her.

“I was looking for, basically, someone to ask the right questions,” Amy said in a video produced by REACH, a program that advocates for and supports MS abuse survivors through in-home consultations and confidential referrals.

After Mageras realized the truth about Amy’s abuse, she spurred her organization to take action and approached FISA for a grant to start REACH.

Today, REACH’s trained representatives come up with safety planning and care procedures for people with MS who are being abused.

“The person is receiving that help in a very safe setting that she chooses,” said Sherie Lammer, the director of activism and outreach at REACH.

REACH has screened about 2,300 people at local MS clinics since 2006, according to Lammer. Out of those 2,300 people, about 750 disclosed that they were being abused.

Trautmann of FISA, who organized the meeting, said its purpose was to connect national and local initiatives to confront a hidden epidemic.

“This is something that not only should we think about, but we should be really mad,” Trautmann said. She pointed to an array of individuals and nonprofits represented in the room, who were all working on similar issues separately.

“This is the beginning of connecting those dots.”