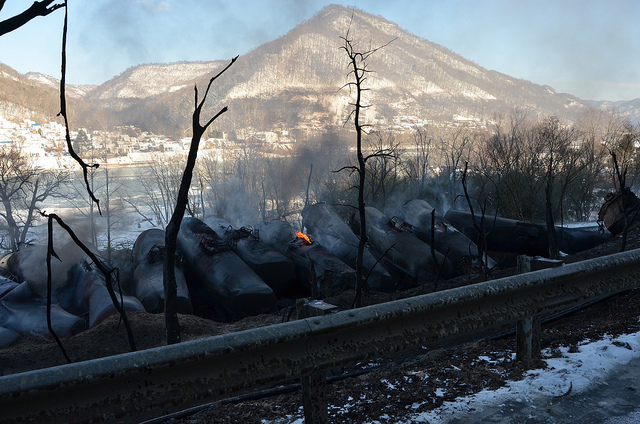 First responders who tackled the fiery derailment of CSX tank cars filled with crude oil in Mount Carbon, W.Va., on Feb. 16, used strategies learned from rail disasters dating back to the 1970s and recent training they received from railroads, according to McClatchy Newspapers.

These tactics likely saved the lives of residents and first responders.

After a CSX train carrying crude oil derailed and caught fire near Mount Carbon, W.Va., last week, local firefighters could have sprayed water and foam on the blaze like they would any other.

But they didn’t do that. Instead, they evacuated residents, kept a safe distance and let the fire burn out, which took four days. This counterintuitive move likely prevented contamination of the Kanawha River, a local source of drinking water.

Although the nation watched as huge orange fireballs erupted from tank cars in the West Virginia accident, no one was killed and only one person was sent to the hospital with minor injuries.

First responders say communication and training are key to an effective response. This year marks the 37th anniversary of a deadly train accident in 1978 in Waverly, Tenn., where tank cars filled with liquid propane exploded and 16 people were killed, according to the article.

Emergency response and training has changed dramatically in decades since the tragedy.

Part of the improvement in emergency response has come from the railroads themselves, which have become more engaged with emergency responders. A lack of communication between the railroad and the police and fire departments in Waverly, as well as inadequate training and equipment, contributed to the deadly outcome, investigators concluded.

Firefighters who responded in West Virginia attended a three-day training class in October. CSX had offered 19 trainings last year along crude oil routes in the country. The course allowed first responders access to tank cars and ways for them to become more familiar with railroad equipment.

One of CSX’s courses was held in Erie, Pa., last year. Emergency responders along crude oil routes in Pennsylvania have been receiving more training specific to crude oil trains since derailments have become more common.