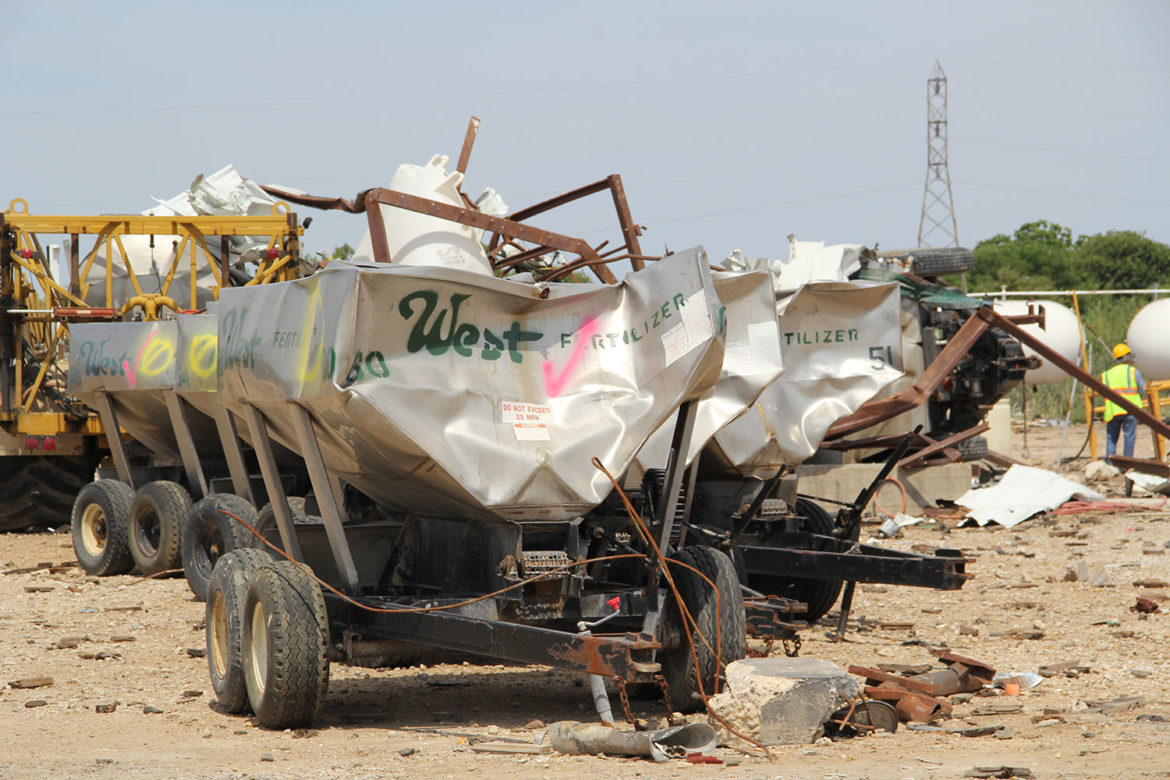 The federal government said it has no way of knowing the locations of all facilities in the U.S. that store ammonium nitrate, the chemical that blew up a West, Texas, plant last year, killing 15 people.

Without improved monitoring of facilities that store ammonium nitrate and coordination between U.S. agencies, federal regulators “will not know the extent to which dangerous conditions at some facilities may continue to exist,” the Government Accountability Office report states.

The report said it’s a lack of data sharing between states and federal agencies, poor communication between multiple federal agencies, outdated regulations and a slew of exemptions for the chemical industry that are to blame for the lack of federal oversight.

Last year, PublicSource reported that Dyno Nobel in Donora, Pa., 20 miles south of Pittsburgh, stockpiles as much as 23 million pounds of ammonia at a time. That’s 432 times more ammonia -- the raw material used in making ammonium nitrate fertilizer and explosives --  than was stored in West. Dyno Nobel uses ammonia to make ammonium nitrate and manufacture explosives.

Federal law requires certain facilities to disclose their ammonium nitrate holdings to state or local officials for emergency planning purposes, but there is no law that says states have to report it to federal agencies. Also each state determines how it shares its data, the GAO report states.

When PublicSource asked Pennsylvania officials for records of ammonia and ammonium nitrate stockpiles, state officials would not hand over the information, citing public-safety concerns.

The GAO report showed that the Department of Homeland Security’s database of ammonium nitrate storage facilities was incomplete. The DHS database showed 1,345 facilities in 47 states, but after checking state data from Texas and Alabama, GAO researchers found the DHS database was missing many storage sites listed in those state’s datasets.

Sen. Bob Casey, D-Pa., was one of four U.S. legislators who called in April 2013 for the GAO to investigate this issue after the disaster in West. Casey was not available for comment on deadline for this story.

The new GAO report urges federal agencies to implement changes and start sharing data to reduce risks to communities and to protect the workers at these sites. The main federal regulatory agencies that govern ammonium nitrate are the U.S. Environmental Protection Agency, the Occupational Safety and Health Administration and the Department of Homeland Security.

After the West explosion, President Obama issued an executive order in August aimed at improving the safety and security of facilities storing chemicals.

“Through the new Executive Order, federal agencies including DHS, EPA, and OSHA have the opportunity to work together on data sharing initiatives to help identify facilities with ammonium nitrate fertilizer,” according to the GAO report.

Federal regulations have not been significantly revised since 1971 and include allowing the storage of ammonium nitrate in wooden buildings, which could potentially increase the risk of fire and explosion.

The GAO report is not the first federal report calling out the shortcomings in ammonium nitrate regulations. In recently released preliminary findings for its investigation into the West explosion, the Chemical Safety Board faulted all levels of government for a lack of proper regulation.

"The fire and explosion at West Fertilizer was preventable. It should never have occurred,” Chemical Safety Board Chairperson Rafael Moure-Eraso said in a statement.

“It resulted from the failure of a company to take the necessary steps to avert a preventable fire and explosion and from the inability of federal, state and local regulatory agencies to identify a serious hazard and correct it.”