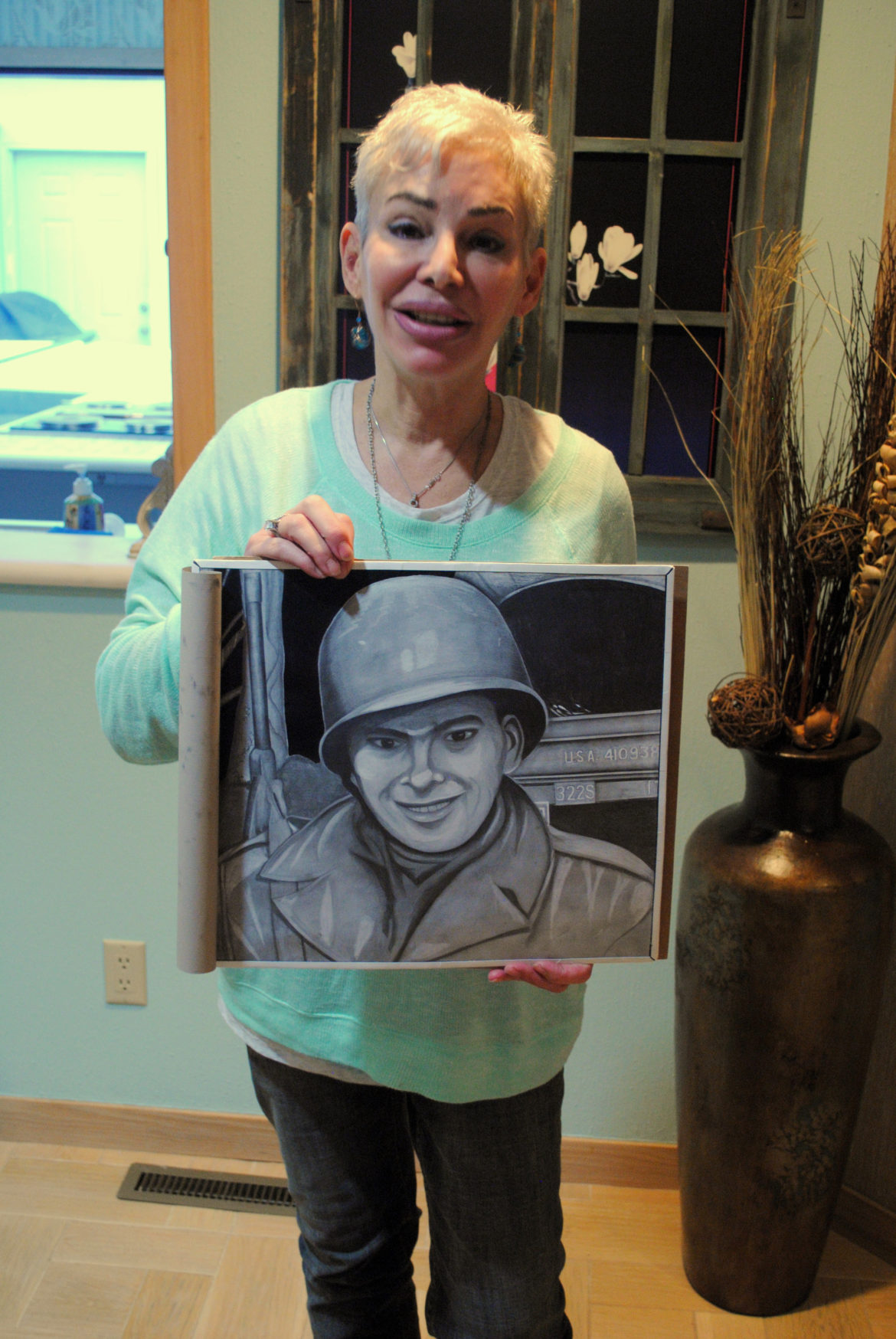 Linda Share poses with an inmate’s portrait of her father as a young soldier.

According to statistics released to PublicSource on Friday, 101 inmates were approved for  compassionate release by the Bureau of Prisons central office in 2014. And 121 were denied.

In 2013, the year when the bureau changed its policy, 61 releases were approved and 15 were denied. It’s difficult to compare the two years because of the policy change.

PublicSource recently examined the federal compassionate release program, which not long ago was blasted by both outside critics and the Justice Department’s internal watchdog for failing to properly identify inmates who might qualify to leave prison early under federal law.

In response to its critics, in August 2013 the bureau updated the criteria to determine the special circumstances that warrant a compassionate release.

The bureau designated those times when an inmate doesn’t have to have a medical reason, such as a terminal illness, for release. Previously, these non-medical requests were routinely rejected, according to the Justice Department’s inspector general. The requests of inmates who might live longer than 12 months before dying of a terminal illness were also usually denied.

So, if more inmates qualify, and more are getting approval, is the system fixed?

She fought for years to get her ailing father Benjamin Share out of prison, as PublicSource recently recounted. At age 85, he suffered a heart attack in March, eight months after the policy update. His warden approved his release. Higher officials denied it.

In a matter of weeks, his health deteriorated further. In June, officials estimated that Share ― a non-violent, white-collar offender ― had six months to a year to live. His release was approved. But he was dead within days of getting out.

Share’s release is included in the 101 released in 2014. Linda doesn’t think it’s fair to count it, citing the allegedly poor care he received in prison and the numerous denials he faced until he was at the very brink of death.

Unlike many people with incarcerated loved ones, Linda also had three lawyers working on her father’s case, could afford six figures in legal costs, dedicated herself full-time to the effort and had support from Sen. Pat Toomey (R-Pa.).

In part, the 2013 provision in the bureau’s policy says inmates 65 and older who have served half of their sentence might qualify for release if they suffer from serious age-related medical conditions, have served more than half their sentence and are deteriorating mentally or physically without substantial improvement.

After his heart attack, the bureau said Share didn’t fit.

Another provision says inmates might qualify simply by being 65 or older.

But they have to have served at least 10 years. Anyone sentenced to 10 years or less is excluded, along with anyone who hasn’t served 75 percent of their sentence.

Final decisions on release are made by federal judges ― but only after the Bureau of Prisons signs off.

Meanwhile, nearly 10 percent of the country’s 210,000 federal inmates are 56 or older, according to statistics available from the bureau. Roughly 2.2 percent (4,585 inmates) are already older than 65.

Nationwide, the number of inmates 65 or older in the federal and state systems has doubled since 2007, according to data from Human Rights Watch. The increase comes as the nation’s total incarcerated population decreased.

Mary Price, general counsel at the advocacy organization Families Against Mandatory Minimums, said an increase in releases can likely be attributed to the bureau’s expanded view of the inmates who qualify.

“It’s still a relatively small number, in light of the need and eligibility,” Price told PublicSource in January, estimating an increase that lines up with the released statistics.

The numbers do not account for denials made by wardens before the central office has a say.

One of those deaths was Edward Ellis, a white-collar inmate who served time with Benjamin Share for fraud in a federal prison camp in Pennsylvania.

He died in September at 74 after being diagnosed with end-stage cancer in August, months after he’d begun rapidly losing weight. His daughter Kelly thought he should qualify for a compassionate release, but the cancer moved faster than the system.

While statistics show an improved program, these cases show how difficult the system remains for dying prisoners and their families.

The bureau did not answer written questions about the compassionate release policy. Current statistics on the program were available only through a Freedom of Information Act request. The bureau does not publish them.