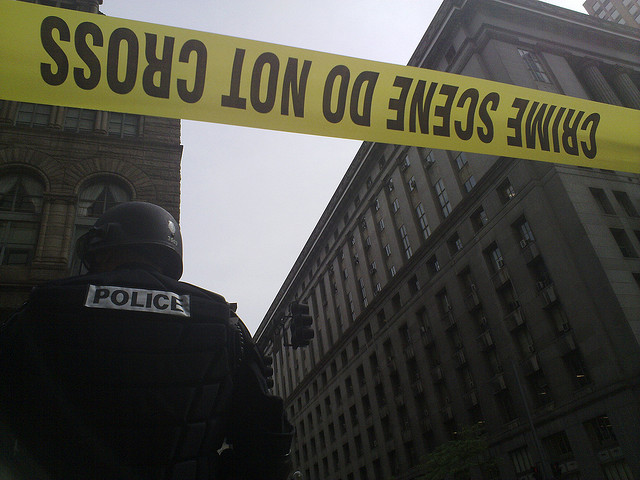 The FBI’s top official now says criticism of police officers — the so-called Ferguson effect — is linked to an increase in violent crime.

FBI Director James Comey spoke Friday at the University of Chicago Law School, embracing a theory echoed by many in law enforcement across the country. Linking scrutiny of law enforcement to crime is controversial because it is based on anecdotal evidence rather than data.

In essence, police say they are less effective because they fear public outcry and appearances on YouTube.

Comey’s remarks put him at odds with the Justice Department, which houses the FBI, and has been a major driver of reform efforts aimed at police officers, including in Ferguson, Mo., where Michael Brown was shot dead by police officer Darren Wilson.

According to The New York Times:

“I don’t know whether that explains it entirely, but I do have a strong sense that some part of the explanation is a chill wind that has blown through American law enforcement over the last year,” Mr. Comey said in a speech at the University of Chicago Law School.

At the same time, Comey acknowledges a lack of data to back his statement.

In a recent closed-door session in Washington, D.C., top law enforcement officials and leaders from several U.S. cities complained that scrutiny of police has hurt morale and made officers “pull back” in enforcement, as Chicago Mayor Rahm Emanuel characterized the phenomenon.

Violent crime has increased in several U.S. cities, but Comey at the time highlighted the lack of data to explain why, according to The Washington Post, which had a reporter in the room.

“We stare at the math, and stare at change in cities that seem to have nothing in common with one another,” Comey said in that meeting, according to the Post.

YouTube videos can quickly send controversial incidents worldwide. Killings of citizens — sometimes unarmed — by police now routinely draw public outrage. However, determining whether officers acted inappropriately is a complicated matter, particularly since they are legally given the power to use deadly force if they feel threatened.

Since Brown’s August 2014 death, the use of deadly force by police has been the subject of ongoing national debate. The Justice Department, which enforces civil rights violations, has been squarely in the middle of calls for reform.

According to the Post, roughly 5 percent of the year’s deadly police shootings are the type that draw protest. The others involved armed individuals who are violent or making threats.

However, explaining spikes in crime is extremely difficult. Crime occurs for numerous reasons and can vary greatly from year to year. Shootings may spike, but homicides may not; it all depends on if someone is hit and killed.

In Oakland, Calif., for example, homicides are on the rise after two years of decline. But shootings are down, and the overall crime rate is about the same, said Oakland’s police chief, Sean Whent. “Our officers are very, very sensitive to the climate right now, but I haven’t seen any evidence to say our officers aren’t doing their jobs,” Chief Whent said.

In Washington, homicides are also up, but violent crime and crime overall are down, said Lt. Sean Conboy, a police spokesman. “Trying to correlate it to a Ferguson effect, I don’t believe is appropriate,” Lieutenant Conboy said.

In Pittsburgh, police officials have been explicit about the need to improve the relationship between the community and law enforcement, embracing the use of body cameras to increase transparency and community policing to be sure officers are seen as a positive force in the community.

The bureau has welcomed help from the Justice Department to improve community policing and efforts to solve homicides. In other words, the bureau is hoping to use stronger community relationships to improve public safety.