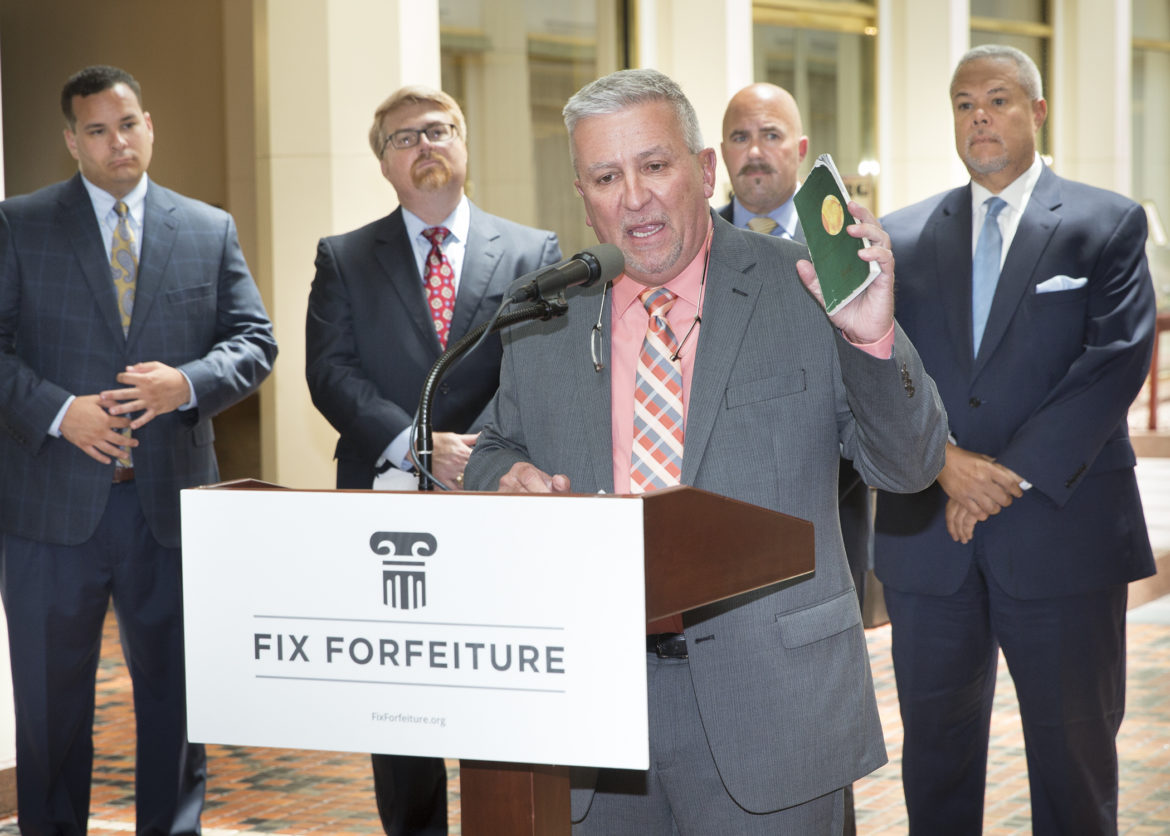 Some drug dealers, embezzlers and other offenders are making a living and then some off of their criminal activities. Asset forfeiture in Pennsylvania was designed as a means to seize those illegal gains, whether cash, jewelry, cars or homes.

However, it has also allowed state law enforcement to use civil law to take, keep and ultimately benefit from assets seized before a case is judged, or even against citizens who have yet to be accused of anything.

Based on current law, people not committing a crime can also be negatively impacted.

A case in Philadelphia saw police seize the home of a couple whose son had been caught selling $40 worth of drugs outside the property. In another instance, a woman faced forfeiture of her house because her estranged husband was dealing small amounts of marijuana.

"Forfeiture is a critical tool to take resources away from criminals, but that's what we expect these people to be: criminals," said Holly Harris, executive director of Fix Forfeiture, a national nonprofit group leading a bipartisan coalition of reformers and legislators seeking to restructure Pennsylvania's asset forfeiture laws.

“It’s a way to hit drug dealers where it hurts,” he said. “We can hit dealers with jail time, but dealers don't care if they’re coming out to a boatload of profits.”

Reform advocates and lawmakers with pending proposals in the state Legislature say they may look to the state's second most populous county as an example of asset seizure done fairly. In Allegheny County, authorities using forfeiture law took $702,631 in cash and more than $7,000 from the sale of seized property during the 2013-14 fiscal year, according to a Pennsylvania Office of Attorney General report.

At the same time, Philadelphia netted $2.7 million in cash and another $728,000 from the sale of seized property.

Searching for a better way

The difference between Allegheny and Philadelphia counties is how forfeiture is conducted.

"The majority of our forfeiture cases occur post-conviction," Manko wrote in an email to PublicSource.

Judge Daniel R. Cashman, an administrative judge with 24 years’ experience in Allegheny County’s criminal court division, handles numerous cases annually where forfeiture is involved. Cashman, like those actively involved in the reform efforts, said he believes forfeiting property not involved in a crime is unfair.

"We want to make sure somebody isn’t being unjustly punished," he said.

Philadelphia County was the focus of a report released by the American Civil Liberties Union in June, calling for the amendment of asset forfeiture laws. Understanding how Allegheny County operates its forfeiture proceedings is part of ACLU's plans moving forward.

ACLU staff attorney Molly Tack-Hooper said studying how Allegheny County practices forfeiture is on the organization’s to-do list. “We know criminal forfeiture would fix many of the problems with a broken civil forfeiture system," she said.

Allegheny County follows the Controlled Substances Forfeitures Act, in which cash, cars, homes, weapons and other evidence directly associated with the sale or manufacturing of drugs can be taken and forfeited under the law.

However, the actual forfeiture takes place only after an accused criminal has been convicted in court.

"The district attorney will seize a car or money that's been obtained through unlawful means," Cashman said.  "Once the conviction comes, that's when I sign the forfeiture order."

For example, a drug dealer arrested for possession can have cash, vehicles or other possessions seized and held as evidence. Should the defendant be acquitted of wrongdoing, his or her assets will be returned. If a defendant is using his parents’ car as a means to sell drugs, prosecutors must prove the title owners knew of the illegal activity in order for the vehicle to be forfeited.

“Why should the parents be punished if the child is the criminal?” Cashman said.

The policy in Allegheny County is meant to avoid the civil law, where the government can legally procure assets it claims are connected to illegal activity even if the owner is found innocent of any misdeed.

Defendants under criminal forfeiture can file a request to get their seized items or cash returned any time during the proceeding, Cashman said. Unlike criminal cases requiring “proof beyond a reasonable doubt,” civil cases put the property itself on trial, with prosecutors needing only a "preponderance of evidence," which is a lower burden of proof.

A template for change?

The current forfeiture process in Allegheny County is similar to a pair of comprehensive reform bills pending in the state Legislature.

State Sen. Mike Folmer, R-Lebanon, is one of the sponsors of Senate Bill 869, which would require a person to be convicted of a crime before law enforcement officials could permanently keep their property.

"Allegheny's (policy) is the basic foundation of what our bill does," Folmer said. "The whole purpose of 869 is not to take away asset forfeiture from the state, but to make sure a conviction happens first."

The fate of the Senate bill, along with that of its House companion Bill 508, remains unclear. Folmer and other reform backers who testified in front of a Senate Judiciary Committee in late October say there must be a change.

“The people who decide to take your property are the same ones who get to keep it,” said Sen. Daylin Leach, D-Montgomery, another longtime forfeiture reform advocate. “There are no other areas of law where that’s true. It’s a bad deal.”

“This bill should be referred to as, ‘The Pennsylvania Drug Dealer Bill of Rights,’” said Ferman, according to a press release. “When more people are dying from drug overdoses than ever before, now is not the time to give a break to drug dealers.”

Over the last decade, Pennsylvania law enforcement has taken more than $100 million in private property using civil forfeiture, according to the ACLU. District attorneys say the money can go to salaries, equipment purchases and to fund programs, like one that makes drug overdose antidotes available.

Prosecutors and police who make decisions about when to pursue civil forfeiture have a financial incentive to seize as much as possible, said Andy Hoover, legislative director of the Pennsylvania ACLU.

"It's the coupling of an easy civil process with profit for law enforcement," said Hoover. "It creates a toxic situation."

In Philadelphia, which runs one of the most aggressive forfeiture programs in the country, about a third of defendants whose belongings were taken were never convicted of a crime, Hoover said.

According to an ACLU analysis of about 350 random cases, the average cash value of these seizures was $192. Forfeitures of $200 or less were disputed 3 percent of the time.

"We see law enforcement taking $200 out of people's pockets, taking cash off people, knowing they won't fight it," Hoover said. "This is nickel-and-diming that adds up to millions.”

Under current civil asset forfeiture law, authorities retain 100 percent of forfeiture profits. Legislation backed by the ACLU would put all proceeds from forfeited property into the state's or county's general fund, depending on which agency seized it.

Pennsylvania lawmakers authorized the process of civil forfeiture in 1988.

U.S. forfeiture law was used during the Prohibition Era to seize vehicles transporting illegal liquor. In the 1980s, the law was utilized in the government's fight against the drug trade.

"Forfeiture's initial purpose had merit; now it's a mechanism for law enforcement to balance the budget," said Harris of Fix Forfeiture. "We're a long way from pirates and drug kingpins here."

Too often, the law is applied in cases against poor minorities from urban areas, Harris said.

For instance, while only 9 percent of Montgomery County residents are black, they represent 53 percent of those targeted for civil forfeiture, according to the ACLU review of cases between 2012 and 2014.

"You take away that person's car or sums of cash, you're hurting their ability to live," Harris said.

Louis Rulli, a law professor at the University of Pennsylvania who has been critical of Pennsylvania's program, said the main defenses to civil forfeiture are called "affirmative defenses," which are waived by the court if not raised initially. Affirmative defenses include the “innocent owner defense,” which allows people whose assets have been confiscated to prove they didn’t consent to illegal use of their property.

"Most people don't know about these defenses," said Rulli. “There aren't any safeguards, so there have been abuses and innocent property owners are finding they're losing their property.”

“The problem is not law enforcement, it's the law,” she said. “That's where our focus is.”

Dauphin District Attorney Marsico has met with Harris and legislators to discuss possible changes to the law. He said he’s glad the conversation is taking place.

“We have to be vigilant so the system is not abused,” said Marsico. “We’re still in the beginning phases of the reform process. I think everyone is negotiating in good faith.”

Correction: This story said the proposed legislation would put proceeds into the state's general fund. It could also be the county's general fund, depending on who seized the property.