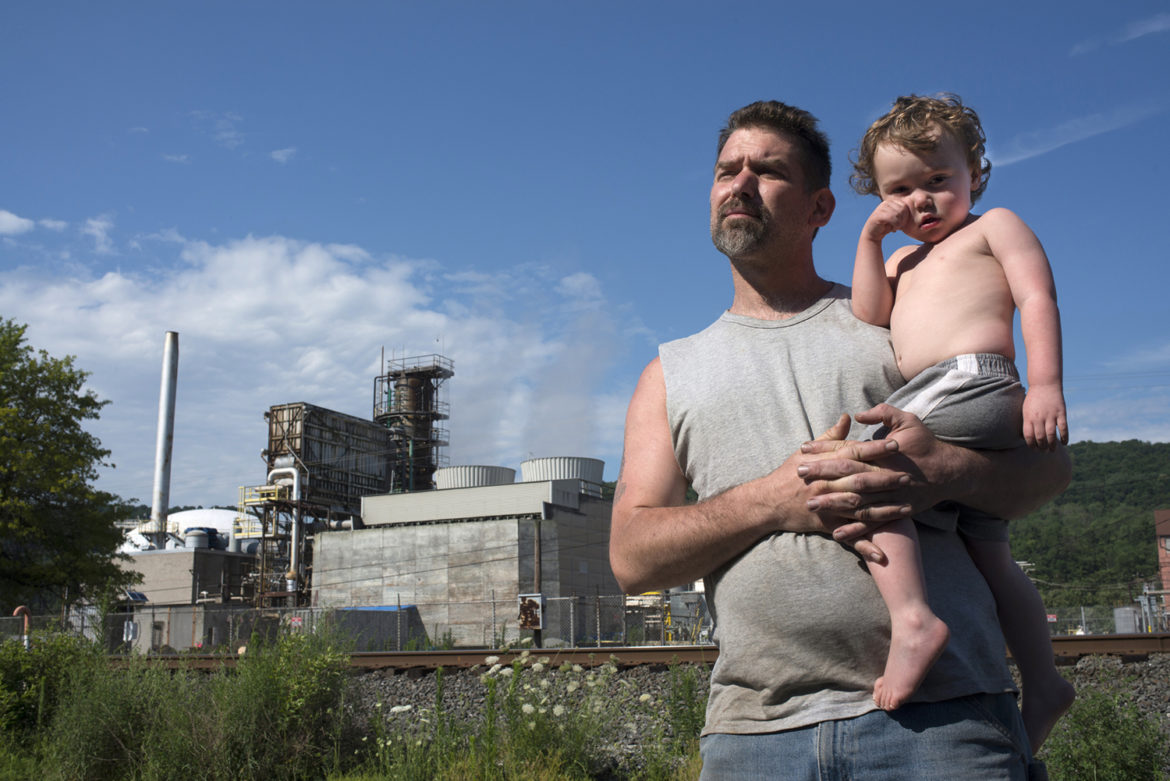 On April 17, when 30 tons of fertilizer detonated in West, Texas, a shock wave travelling faster than the speed of sound crushed homes. Windows shattered seven miles away. The United States Geological Survey recorded a 2.1 magnitude tremor from the blast.

Fifteen people died, 12 of them firefighters and emergency responders, and 200 were injured.

The same chemical that blew up West -- ammonium nitrate -- is manufactured in Donora, Pa., 20 miles south of Pittsburgh.

Dyno Nobel is a manufacturer of explosives in Donora, and it stockpiles as much as 23 million pounds of ammonia at a time, according to the most recent report from the Environmental Protection Agency. That’s 432 times more ammonia -- the raw material used in making ammonium nitrate fertilizer and explosives --  than was stored in West.

Photos by Martha Rial for PublicSource.

Pennsylvania officials would not release records of ammonia or ammonium nitrate stockpiles, saying the information could threaten public safety. However, a federal law requires the state to disclose that information.  And safety experts said that the public is more likely to be harmed by an industrial accident than by terrorists.

Families need to know that “grandmother is in a nursing home across the street from a facility that might explode,” said Sophia Plagakis, an environmental policy analyst at the Center for Effective Government in Washington, D.C. (A nursing home in West was destroyed by the blast.)

Are the 4,800 residents of Donora aware of the risks of the chemicals in the town?

“I’ll be very blunt with you. No. They have no idea,” said former Donora mayor Anthony Massafra. “I’m sure people are not aware of what exists and what goes on down there.”

‘A game plan for everything’

Ammonium nitrate is stable when handled properly. But, under the right circumstances, it can produce a rare, but devastating, explosion.

Ammonium nitrate fertilizer mixed with fuel oil, for example, was used in the bombing of the federal building in Oklahoma City in 1995 that killed 168 people and injured more than 680.

Several investigations are ongoing in the West explosion. However, other inquiries have determined that ammonium nitrate was the primary cause of the blast.

Ammonia is classified by the EPA as an extremely hazardous chemical. Its pungent odor is unmistakable to anyone who has used it as a household cleaner, which is about two percent ammonia in water. The ammonia in Donora is pure.

Large amounts of ammonia are stored by at least 59 companies in Pennsylvania, according to a federal database.

Firefighters in West knew about the ammonia warehoused there, according to the U.S. Chemical Safety Board. But they had not been given a fact sheet on the dangers of ammonium nitrate explosions that would have helped them prepare for and fight the fire.

In Washington County, where Dyno Nobel is located, it’s been five years since the hazmat team had a major drill at the plant, according to Jeff Yates, the team’s director. The county is planning a full-scale drill with the company and local first responders later this year.

“Dyno Nobel is and has continually been proactive in environmental, health, and safety training and preparedness,” the company said in a written response to questions.

It does training exercises six to nine times a year, and it handles small incidents on its own. If a significant incident happens, a company spokesman wrote, it would ask for outside help.

Patsy Vince, Donora’s volunteer fire chief, wouldn’t say much about training, planning and preparations with Dyno Nobel. “They basically handle everything,” Vince said. “If they need help, we help them.”

“Rest assured, the community is in safe condition,” said Donora Mayor John “Chummy” Lignelli. “But of course, if something happens, they have a game plan for everything.”

Donora is nestled along a horseshoe bend on the west bank of the Monongahela River. Posters in storefronts around town proclaim that “clean air started here,” a reference to a 1948 killer smog that spurred federal clean air laws.

A heavy fog blanketed the valley for five days, trapping toxic gasses from the mills. Twenty people died and thousands became ill. The exact cause was never determined, but the prime suspect was the corrosive gas spewed by the Donora Zinc Works. Dyno Nobel is located on the old zinc works property.

Today, the old mill town’s air is cleaner. The smells are less noxious.

And the streets are empty.

The big mills have closed. The last of Donora’s banks shut down this year. There is no grocery store or gas station in town. Most stores are boarded up or empty.

Rust belt towns like Donora have an incentive to overlook hazardous chemical risks. They are desperate for jobs and tax revenue.

“There is still a mentality that it’s an employer, and we’re in desperate need of something like that,” said resident Charles Stacey, former superintendent of the Ringgold School District.

Mayor Lignelli said he has heard comments from only a couple of people who live near Dyno Nobel about what the plant does.

Carl and Evelyn Vehouc have lived on Gilmore for 42 years. He toured the plant when he was a volunteer firefighter and he said he knows enough that if the siren goes off “it’s bad enough to get out of here.” He said he feels safe.

Rob Sickels said he had his mother take his children out of the neighborhood when he got a strong whiff of ammonia one day. He said he doesn’t know what he would do in an emergency.

Ammonium nitrate regulations are “a patchwork that has many large holes,” Rafael Moure-
Eraso, chairman of the Chemical Safety Board, told a U.S. Senate committee looking at the West explosion in June.

Companies that handle large amounts of toxic and flammable chemicals must file plans that include a hazard assessment, prevention program and emergency response program. They must share the plans with local fire departments and state and local emergency committees.

Ammonia is covered by the rule. Ammonium nitrate, the potential explosive, is not.

For at least 11 years, the Chemical Safety Board has recommended that companies be required to file risk plans for explosive chemicals like ammonium nitrate. Neither the EPA nor the Occupational Safety and Health Administration has acted on the recommendations.

“I’m not going to uproot myself for the slim chance that it might blow,” said a woman who lives on Gilmore Avenue. “I’ve got 30 years here and it hasn’t happened yet.”

She declined to give her name.