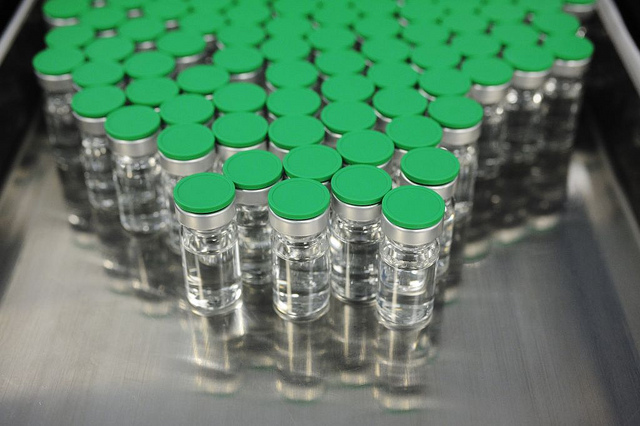 Many of the top cancer drug makers sell their products in a one-sized vial that has enough of the drug in it to treat a person who is 6 feet 6 inches tall and weighs 250 pounds, according to a new study published in BMJ.

For patients who don’t fit that profile, it means that a lot of money is wasted on drugs they don’t use, according to a New York Times story on the study. The annual waste is almost $3 billion.

Why not just save the leftover medicine? Nurses have to discard any excess for safety reasons. Only specialized pharmacies reuse the leftovers, and even then, only within six hours of opening a vial.

From the Times story:

“Drug companies are quietly making billions forcing little old ladies to buy enough medicine to treat football players, and regulators have completely missed it,” said Dr. Peter B. Bach, director of the Center for Health Policy and Outcomes at Memorial Sloan Kettering and a co-author of the study. “If we’re ever going to start saving money in health care, this is an obvious place to cut.”

Some of the most recent cancer drugs have an average annual price of $190,000, according to the Times story; Medicare and other insurers can charge co-payments of as much as 20 percent.

The study concludes that insurers paid the drug companies $1.8 billion on the discarded quantities, “and then spent about $1 billion on markups to doctors and hospitals,” according to the Times.

A patient with multiple myeloma receives a weekly dose of 1.8 milligrams of Velcade, but the medicine comes only in 3.5-milligram vials, meaning more than half of the $1,000 drug is wasted every week.

The drug’s manufacturer, Takeda Pharmaceuticals, wrote that it worked with the Food and Drug Administration [FDA] to “ensure that one vial of Velcade would provide an adequate amount of the drug for a patient of almost any size,” but, in Great Britain, the drug is also sold in 1-milligram quantities, according to the Times.

The study expects Takeda to “earn $309 million on supplies of Velcade that are discarded, an amount that represents 30 percent of the drug’s overall sales in the U.S.”

Several doctors remarked to the Times that Europe sells the same drugs in varying and smaller quantities because the regulators are paying attention, whereas the FDA would only object to the large vial sizes if it believed there was a chance of safety issues.

The 50-milligram vials are still on the market in Europe.

Eighteen of the top 20 cancer medicines are sold in just one or two vial sizes, so on average 10 percent of the volume of cancer drugs purchased by doctors and hospitals is discarded, the researchers say.