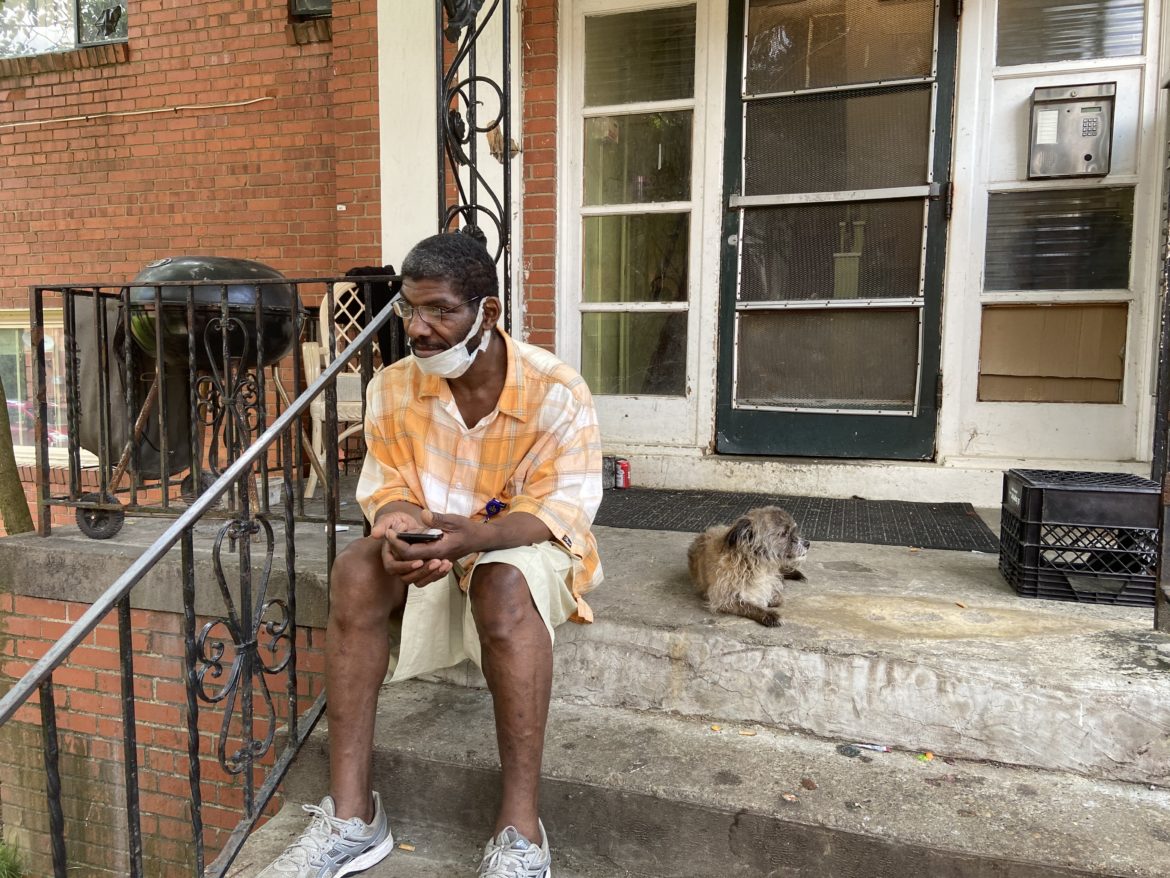 Offered a room at the Red Roof Inn if he moves immediately, Anthony Straughter of Valmar Gardens in Penn Hills, wonders how he could accommodate his poodle mix, Joe, on June 19, 2020. (Photo by Rich Lord/PublicSource)

An effort to evict remaining residents at Penn Hills’ long-troubled Valmar Gardens complex was put on hold Friday, after some of the occupants said they had leases, and others argued that they had nowhere to go.

“You all know this is Juneteenth, right?” said Antonio Kennedy, who lives in Valmar with Kathleen Herbert, as Penn Hills police and Allegheny County sheriff’s deputies milled about. “Pandemic’s going on, and you’re all worried about putting people out?”

The four-building Valmar Gardens, on Robinson Boulevard, has a history of financial troubles and utility shutoffs, and three of the buildings have become uninhabitable, including one damaged in a fire in January, residents said. That left one building, with five occupied units, mostly housing couples including one with a four-year-old daughter.

As ownership has changed repeatedly, the residents have not been paying rent but have been covering the electricity bills, maintaining the building, picking up garbage and mowing the grass, they said. One showed a reporter utility bills in her name.

Residents said they heard secondhand, on Thursday night, that they would be booted from the building. Around 9 a.m. on Friday, water service stopped. Around 10, Penn Hills police, sheriff’s deputies and other county officials arrived, along with Jason Greenwald, who said he was a representative of the new owners, BDCTC LLC.

Penn Hills Police Sgt. David Wilkinson said the property has been condemned, and that Allegheny County Court of Common Pleas Judge Christine Ward has issued an order permitting the evictions. He told residents the property was now uninhabitable due to the lack of water service.

He said the residents have been offered hotel rooms for an unspecified duration, and that some, who had leases, were paid $2,500 in relocation money.

Several residents said they had not received any relocation payments, though some said that Greenwald offered them $1,000 to move immediately.

Heather Talkish, a day care worker who is raising a four-year-old daughter at Valmar, said she had “no idea what’s going on. … No one’s talked to me. [Police are] standing over there in huddles.” She began to weep. “Nobody gave me a warning.”

Greenwald told residents the owners had made arrangements to house them temporarily in the Red Roof Inn in Monroeville. He said the new owners want to rehabilitate the property, so it can better serve the community, but can’t start that while people are still living there.

Anthony Straughter, who lives in Valmar with his dog, Joe, said he had nowhere to go. “This is unfair,” he said. “We didn’t get no notices. Then they turn the water off to make an excuse to get us out.”

By early afternoon, police had left Valmar Gardens and representatives of Pittsburgh Mercy’s Operation Safety Net were trying to get water service restored.