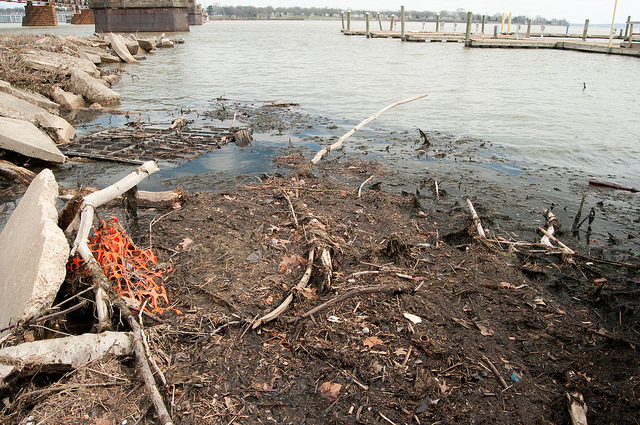 Pennsylvania has fallen behind the interim goals to reduce the amount of pollution it contributes to the Chesapeake Bay.

Pennsylvania is one of the largest contributors of pollution to the Chesapeake Bay, which borders Maryland and Virginia.

Pennsylvania is the only member in the Chesapeake Bay watershed, which includes six states and the District of Columbia, that the EPA reported it had “substantial concerns” about, according to a 2015 interim progress report.

The seven jurisdictions included in the Chesapeake Clean Water Blueprint plan are all expected to have pollution control measures in place by 2025, with at least 60 percent of the progress made by 2017. The EPA’s Chesapeake Bay Total Maximum Daily Load (TMDL) is a federal court-mandated plan established in 2010 aimed at curbing the volume of pollutants flowing into the bay.

Although the state does not border the Chesapeake Bay, more than half of Pennsylvania lies within its watershed, according to the United States Department of Agriculture.

The state has 35,000 farms in the bay’s watershed and together, the Potomac and Susquehanna rivers account for 40 percent of the watershed’s land area. Every minute, the Susquehanna River pours 19 million gallons of water into the Chesapeake Bay, according to Lancaster Farming.

In January, Pennsylvania officials unveiled a plan to inspect more farms in the watershed, which are some of the largest sources of nitrogen pollution, to come into compliance with the Chesapeake Bay cleanup mandates. A Bay Journal story reported that EPA reviews found that fewer than 2 percent of Pennsylvania farms inside the Chesapeake Bay watershed were being inspected each year.

The initiative is focused on reducing the levels of nitrogen, phosphorus and sediment from agricultural runoff in the Chesapeake Bay watershed. According to the EPA, “the excess nutrients and sediment lead to murky water and algae blooms, which block sunlight from reaching and sustaining underwater Bay grasses. Murky water and algae blooms also create low levels of oxygen for aquatic life, such as fish, crabs and oysters.”

In its review of the state’s progress in 2014, the EPA found that Pennsylvania was “substantially off track” for its nitrogen reduction. Pennsylvania is currently 16.3 million pounds away from its 2017 agricultural nitrogen goal of 94.05 million pounds.

The EPA last year temporarily withheld close to $3 million in federal funding from Pennsylvania until state officials showed the state was on track to meet its cleanup goals.

This spurred Gov. Tom Wolf and John Quigley, who just resigned as secretary of the state Department of Environmental Protection, to implement a “reboot” of the state’s cleanup initiatives.