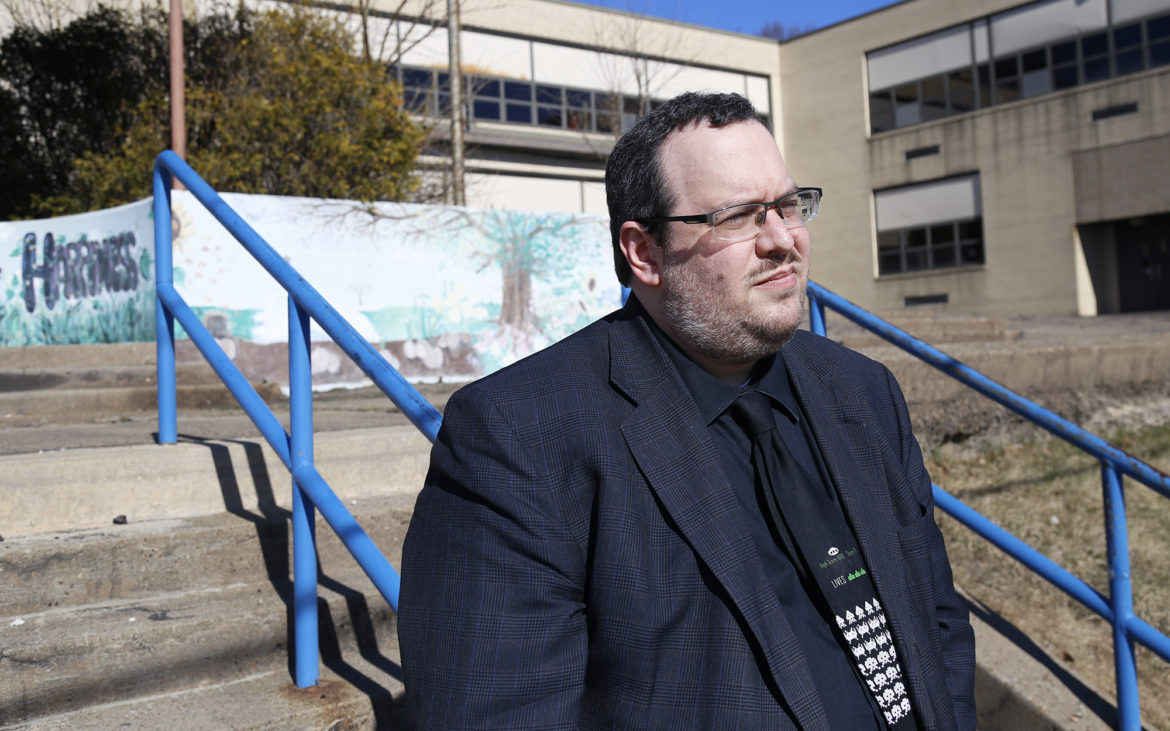 Steven Singer is a teacher at Steel Valley Middle School. Here he is photographed outside White Oak Elementary School, where he attended as a child. The school closed in recent years. (Photo by Ryan Loew/PublicSource)

I flashed these and other phrases on the screen in my eighth-grade classroom during a February class. I told my students to take notes and try to figure out what all of these phrases had in common.

As I continued showing the phrases, it became more obvious to the students.

“What are you following me for?”

Eventually one of my eighth-grade students caught on.

And then it all fell into place. These were the last words of African-American men wrongly killed by police.

As a white teacher at Steel Valley Middle School with classes of mostly students of color, I don’t mind talking about race and prejudice in school. In fact, I find it essential to doing the job properly.

The lesson I described led to some deep discussions about the role of law enforcement, rules of engagement and justice.

And it almost didn’t happen because of standardized testing.

I adapted the lesson from the Black Lives Matter at School curriculum that teachers were using across the country during a week of action Feb. 4 to Feb. 8. There were lessons on diversity, restorative justice, black families, women and villages, collective value, queer and transgender affirmation and so much more.

Teachers — especially those serving students of color — were trying to enrich and attest their students’ individuality while engaging them in culturally and developmentally appropriate lessons.

Yet I couldn’t fit any other activities into my lesson plans because my principal demanded we spend several days taking yet another Classroom Diagnostic Tools [CDT] test to predict how my students would do on their Pennsylvania System of School Assessment [PSSA] tests in April.

That’s why I get so angry when I read news articles about the racial achievement gap. Journalists look at the data and report it without understanding what it means.

We can’t crack open students’ heads and see what they’ve learned — much less compare what’s in one head versus another.

All we have are behavioral substitutes: tests, projects, observations. And the only one our society really cares about is standardized testing.

So what you really mean is that black students get lower test scores than white students.

That’s not news. And the reason isn’t unresponsive teachers who just don’t care about their students.

I believe the tests themselves are biased and inaccurate assessments that pervert the entire educational enterprise.

“The more any quantitative social indicator is used for social decision-making, the more subject it will be to corruption pressures and the more apt it will be to distort and corrupt the social processes it is intended to monitor.” 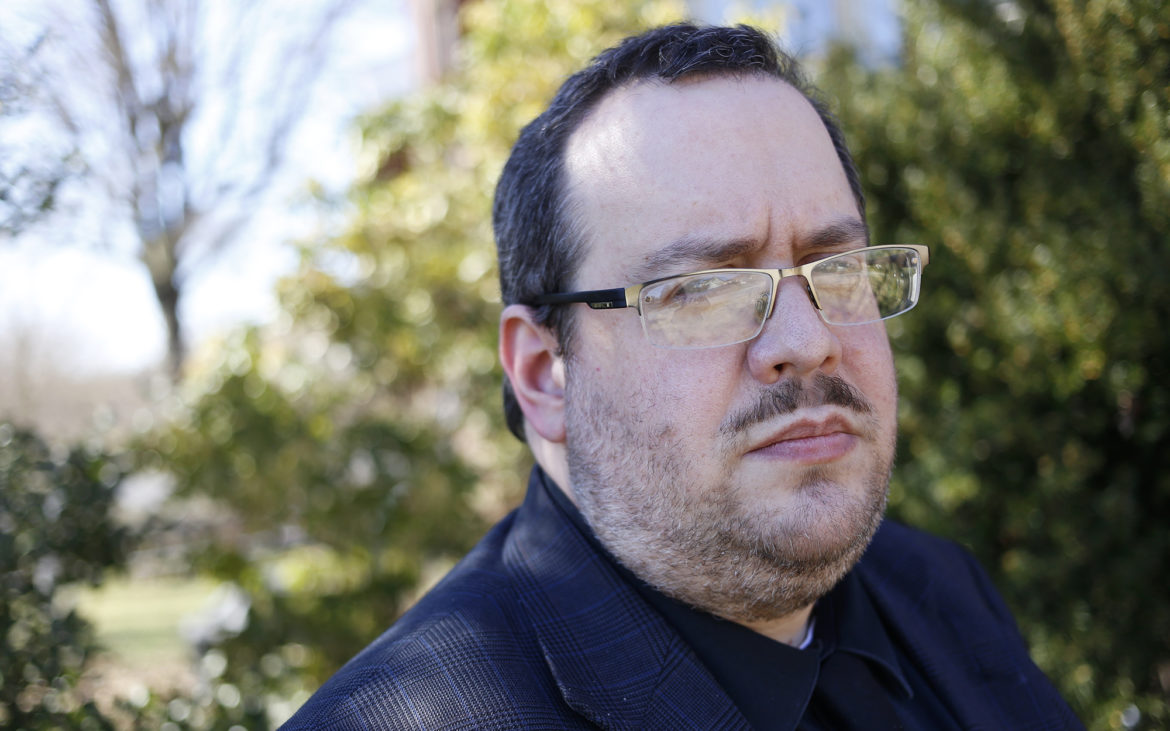 Our schools should engage in more lessons like the one I detailed that are culturally responsive, address kids where they are and entice them to use their innate curiosity and creativity to succeed academically.

And the reason we don’t do more of these kinds of lessons is because of standardized testing and Common Core.

There’s no canned academic standard forced on us by the state and federal government asking us to be culturally responsive. There’s no test question that assesses student engagement or depth of thinking.

So we’re pressured to do endless test prep and suck the life out of a place that can be the most amazing neurological and emotional playground — public schools.

Moreover, we ignore where these tests came from in the first place.

Standardized testing as practiced in the United States was originally created by a leading intellectual driver of the eugenics movement.

The Scholastic Aptitude Test [SAT] was created by Carl Brigham, a professor at Princeton University and author of a discredited white supremacist report, titled A Study of American Intelligence. Though the SAT has been revised since Brigham’s time, it has inspired nearly all of the high-stakes standardized tests since.

These assessments were opposed by leading black intellectuals of the past such as W.E.B. Du Bois, Howard Long and Horace Mann Bond. In 1924, Bond pointed out that standardized tests lead to "crude and inaccurate generalizations" because they ignore inequities in a student's environment.

Even today, I believe these tests still overwhelmingly privilege white people over people of color. That’s why they are opposed by civil rights organizations like the National Association for the Advancement of Colored People [NAACP], which stands against the use of test scores as a single measure for whether a student can advance.

The federal government forces us to give these high-stakes tests to be eligible for school funding and they are a factor in the evaluation of teacher performance.

Black kids don’t do as well on the tests? The same goes for poor kids. And guess what? They’re nearly the same demographic!

"Racial achievement gap? The only chasm is between our poor vision of what counts as achievement and the real-world excellence these children demonstrate every day."

These tests don’t show which students learned what. They simply recreate the economic situation that spawned them — rich kids do well and poor kids do badly.

Pennsylvania is among the worst states for funding inequality in the country.

According to a study from the National Center For Education Statistics, Pennsylvania's poorest school districts spent 33.5 percent less on education than the richest districts in the 2011-12 school year. Pennsylvania's difference was the largest in the nation, followed by Vermont, which had a difference of 18.1 percent.

Our state’s funding structure puts the responsibility on local districts. So rich neighborhoods make up the difference and give their kids everything. Poor communities can’t do that so their kids go wanting.

And you want to talk about the racial proficiency gap in Allegheny County?

I think it’s there by design. In my experience, it’s not because of anything teachers do.

Take it from me. Teachers are creating miracles every day for their students. Which brings me back to my lesson on “Last Words.”

At the end of class, I asked my students to take our discussion one step further in writing. They could jot down almost anything: a letter to the local police department, a personal narrative, a poem, whatever.

The results were some of the best student work I have ever received.

They told me about being followed by security officers through stores, about relatives who died as a result of police brutality or gang violence, about the first shooting they had experienced. One girl mentioned hearing a “Pop! Pop! Pop!” and her mother holding her in the kitchen as guns went off in the neighborhood.

But the one that hit me the hardest was a poem written by the quietest boy in class. He had written a Muslim prayer for the dead with the repeated chorus “Alhamdulillah” (meaning all praise is due to God alone), expressing all the pain and confusion his 13-year-old self could muster.

Yet none of that registers on standardized tests.

Racial achievement gap? The only chasm is between our poor vision of what counts as achievement and the real-world excellence these children demonstrate every day.

Steven Singer is a teacher at Steel Valley Middle School. He blogs at gadflyonthewallblog.com and can be reached at Stevenmsinger@hotmail.com.