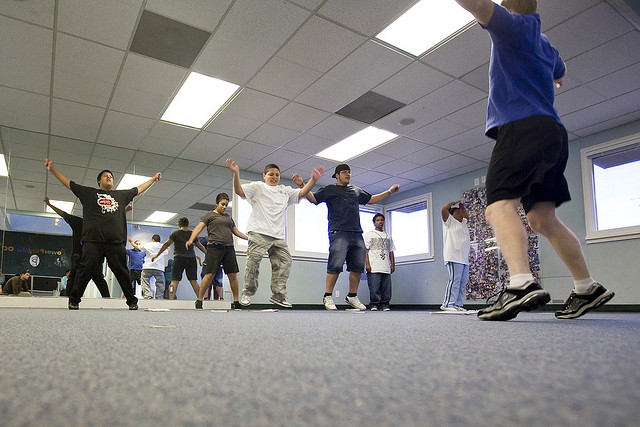 A fitness and nutrition program that helped curb obesity among at-risk youth in a Western Pennsylvania residential facility raises questions about how weight gain became such a problem at juvenile facilities.

On Thursday, the Highmark Foundation published the results of nutrition and exercise programs at George Junior Republic (GJR), a Grove City facility for boys who have been deemed delinquent or dependent in court.

While the weight loss programs instituted by nurses, dieticians, psychiatrists and physical trainers were successful, it highlights a major side effect associated with the alarming rates of psychotropic prescribing to at-risk, court-involved youth.

Antipsychotics — a type of psychotropic drug approved to treat bipolar disorder and schizophrenia — have been linked to rapid weight gain that can lead to diabetes, metabolic syndrome and cardiovascular problems.

According to the Highmark Foundation, which funded the program, 85 residents participated in a 40-week fitness and nutrition program and lost a combined 352 pounds. In another yearlong program 102 participants lost a combined 479 pounds.

Upon admission to GJR, 75 percent of kids had suffered from trauma and were taking at least one prescribed psychotropic medication, according to the study results.

“Two side effects for many of [psychotropic] drugs are appetite changes and the resulting weight gain,” the study reads. “As a result, staff observed a significant increase in the number of overweight or obese youth with comorbidities, including diabetes, high cholesterol and hypertension.”

Despite this noted connection between psychotropics and weight gain, the researchers did not track participants weight or body mass index loss in tandem with medications prescribed to youth.

Pam Young-Poindexter, a nurse at GJR who came up with the idea for the nutrition and fitness programs, said she wanted to address a significant obesity problem in Pennsylvania, as well as a history of already heavy children gaining weight while at GJR.

She also said she has seen an increasing number of kids coming into youth facilities on prescription drugs.

“[There’s an] overwhelming amount of children that are arriving here on antipsychotic medications,” she said. “You can’t always discontinue the medications because sometimes the symptoms become unmanageable.”

A 2015 PublicSource investigation into psychotropics at state youth correctional facilities found that, as of late September, 44 percent of 266 residents had a psychotropic medication prescribed by a psychiatrist.

Young-Poindexter didn’t think overprescribing was more of a problem at GJR than it is elsewhere but said an increased focus on physical health could offer an alternative solution to addressing depression and anxiety.

“When they can play basketball better and they can run better...when they’re stronger and they know they look good, they feel good,” Young-Poindexter said, adding that psychiatrists and mentors shouldn’t let their focus falter following small improvements.

“You have to work with kids longer to let them experience success,” she said.

The aim of the GJR study, according to Young-Poindexter, was not to monitor the connection between medication and obesity, but to promote peer engagement and a healthier mindset.

She said connecting certain medications with weight loss success in individuals would be a useful study in the future if nurses and dieticians could work more closely with psychiatrists.

Dr. Christoph Correll, a psychiatrist and scientist, who published a study in 2009 linking antipsychotic use and weight gain in youth, told PublicSource that he advised other treatment plans before psychotropic drugs.

“Children and adolescents seem to be more vulnerable to these side effects,” he said. “We need to improve the behaviors of the mentally ill with education and healthy lifestyle and go to low-risk interventions first.”