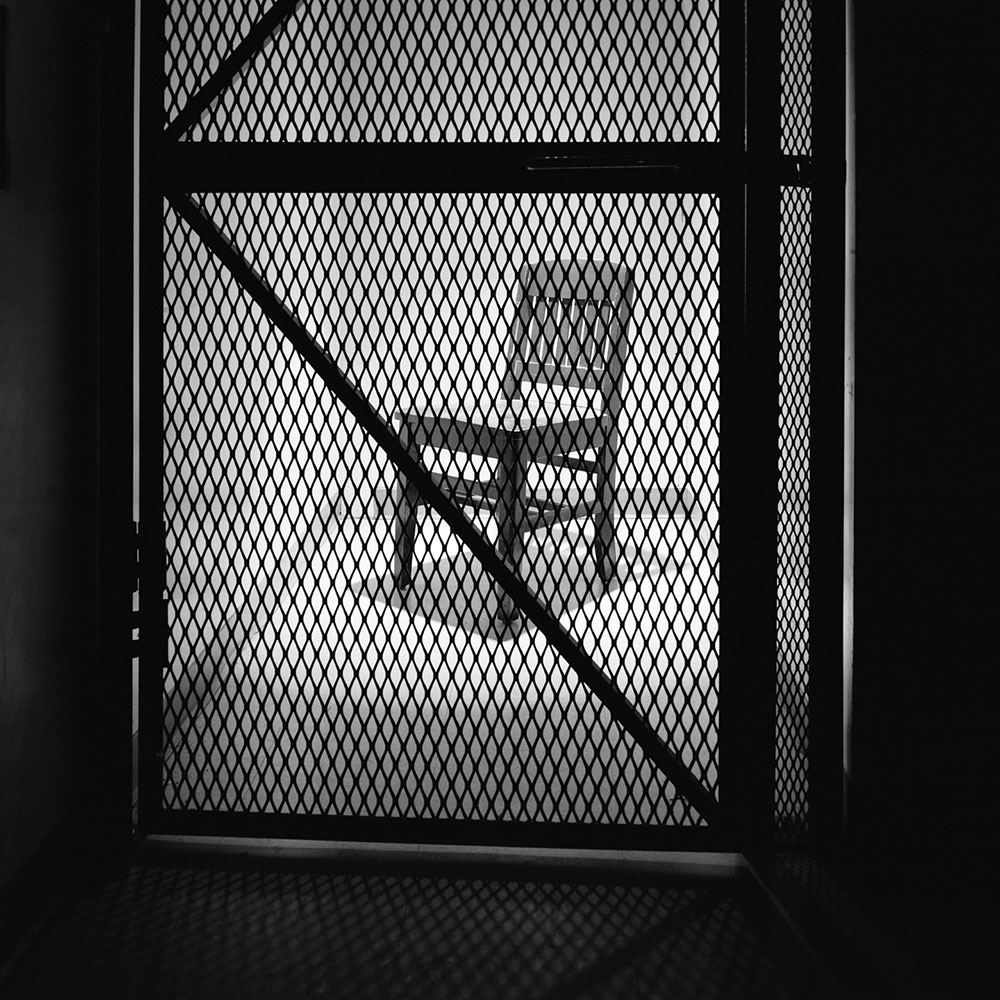 After the penitentiary was closed in 2005 and the last inmates had been transferred, he photographed and transcribed all the words on the cell block’s walls. The words became electric, like a downed wire lying in the grass, charged with years of emotions that had no other outlet in the maximum-security prison.

The notes, poems and letters, sometimes signed and sometimes anonymous, were to other prisoners, guards, family members and girlfriends.

“These walls are crying from the pain they’ve felt,” wrote one prisoner of E Block, above a section of wall where the paint had dried in thick drips.

Perrott’s year-long project photographing the prison, along with the writings on the walls, fill the pages of his new book, “E Block.”

The photographs are on display at Pittsburgh Filmmakers Galleries; Perrott will give an artist’s talk and sign books from 6 to 8 p.m. May 10.

Without picturing a single human, his black-and-white photographs are thick with reminders of the people who were held or worked within the walls of Pennsylvania’s oldest prison.

“Prison is a place that I think we all work so hard to ignore,” said the 67-year-old Pittsburgh photographer in a telephone interview.

“This is my collected portrait of what that place is,” Perrott said. “Those pictures weren’t made with an agenda. They were made as a witness.”

Prison on the Ohio

Many people he talked with about the project had no idea that the prison is just a few miles from the rapidly developing North Shore, home to the Rivers Casino, Heinz Field, PNC Park, the Carnegie Science Center and the Andy Warhol Museum.

In 2005, the facility was mothballed, closed but not gutted, and two years later given a second life as the State Correctional Institution Pittsburgh for lower-level security prisoners.

SCI Pittsburgh recently became better known for a different cellblock as officers on F Block were charged and tried for crimes against inmates.

The inmates’ notes at the heart of Perrott’s work aren’t easy to read. They’re cries for help, wails for forgiveness, chronicles of unspeakable crimes that make you -- the viewer from outside the cell -- suck in your breath.

Yet, soft, buttery light floods the empty spaces in some images, including the photos of the domestic side of life in prison, a barber chair and kitchen utensils. In those same images, the metal gates and and padlocks serve as stark reminders that there’s no freedom here.

Perrott said he knew right away while touring the facility that E Block was where he would spend the bulk of his time because of the writings on the walls.

“Those voices were so complicated and so loud. And the drawings that people left...were such a powerful discovery,” he said.

One of the sketches, for example, shows a broad tree trunk and the words: “This is my family tree.” At the end of a tree branch, a figure hangs from a noose.

Although not exclusively known for prison photography, Perrott also photographed Eastern State Penitentiary in Philadelphia, a prison-turned-museum, known for it’s radial design; he photographed Allegheny County Jail before the the historic building became a part of the county courthouse in downtown Pittsburgh.

His book includes an essay by writer Adam Gopnik, “The Caging of America,” reprinted from The New Yorker, about the epidemic of incarceration.

"It’s hotter in the summers. Colder in the winters, when the board paroles you then another con enters."
- cell #156

The rate of incarceration is higher in the United States than anywhere in the world. About 1.6 million people are in prison, about 51,500 of them in Pennsylvania, according to the latest numbers from the Bureau of Justice Statistics.

During the last 40 years, the national prison population has increased dramatically, said Bill DiMascio, the executive director of the Pennsylvania Prison Society. The country’s sentencing laws for relatively minor crimes, such as drug offenses, are too severe, he said.

The chance of a prisoner with a life sentence being released is rare in many states, including Pennsylvania.

"Once you're sentenced to life in Pennsylvania, the only way to get out is to have your sentence commuted," which is extremely rare, DiMascio said.

DiMascio saw some of Perrott’s photographs early in the project and said the photographer has a way of capturing the starkness of prisons.

“There’s this conception that prisons are country clubs, and I don’t think you can see those pictures and keep that thought in your mind,” he said.

Perrott is humble about his work.

“I know nothing about prison. I have no firsthand knowledge of prison. I’m an outsider,” Perrott said. “But the words on the walls give me some clues... about that humanity, that vulnerability. And all of their words of contrition.”

The book, which had been discussed for years, came together in late 2012. Perrott said he dumped the photographs and transcriptions in the lap of designer Joe Petrina of Landesberg Design. Three weeks later, Petrina had produced a rough cut of the book.

"Joe didn’t flinch, and that’s his genius. He did not look away,” Perrott said of the designer.

The same could be said about Perrott.

Correction: A previous version of this story incorrectly said that Pennsylvania is one of the only states that does not allow a life sentence to be commuted. It does, but only in very rare case.