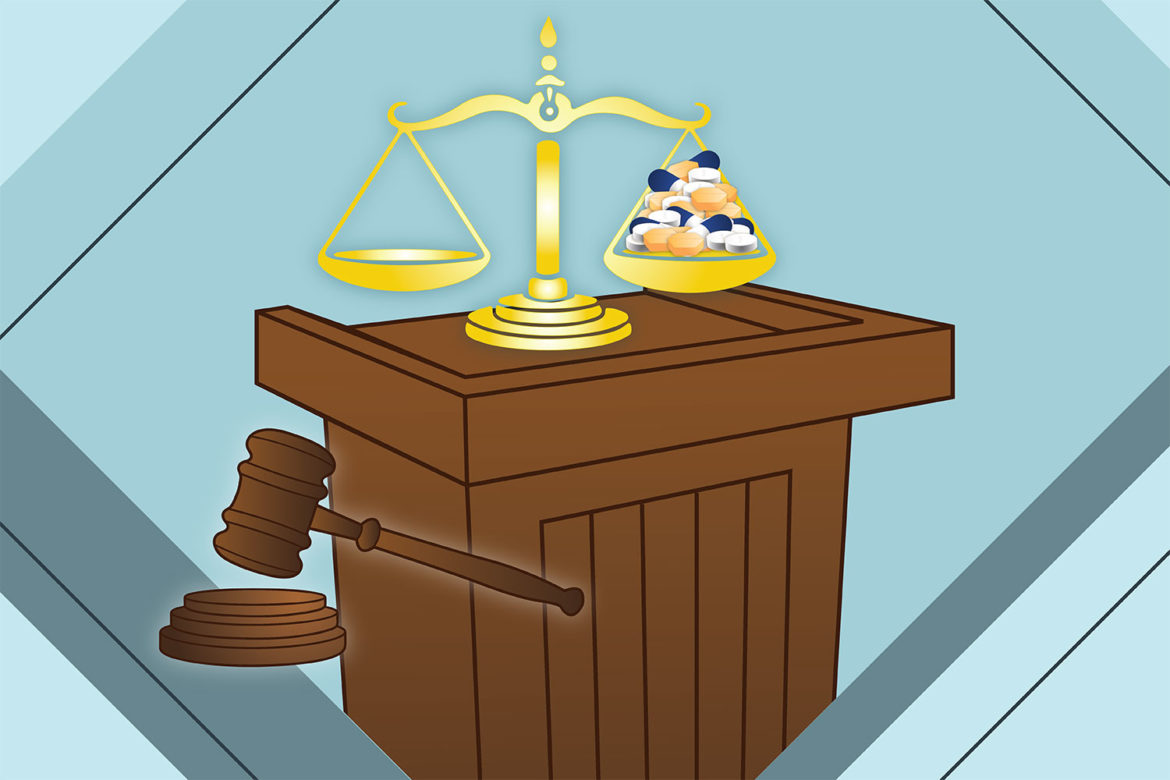 In Allegheny County, Judge Lester Nauhaus sees his drug court as an alternative to the carnage of the drug war.

Drugs drive crime. But locking up addicts doesn’t stop crime. Nor does it stop drug addiction.

“Nail ‘em and jail ‘em wasn’t working,” Nauhaus told PublicSource in an interview. “All it was doing was costing everybody a fortune.”

Instead of locking up defendants, drug courts allow prosecutors, public defenders, judges and others to work together to get defendants to much-needed drug treatment.

But there are clashing opinions about how drug courts should operate.

Many judges, including Nauhaus, ban drug court participants from using treatments like methadone and buprenorphine, calling such medications a “chemical crutch.” He requires participants to focus on abstinence.

That puts the judge and his court in direct conflict with national drug court standards and federal officials, who condemn the banning of medications.

To Nauhaus, medication is simply replacing one drug with another. And that drug can be abused, just like heroin, and sold on the street.

So a heroin addict in Pittsburgh has to give up medications that help stave off addiction to get treatment through drug court.

Both the federal government and the National Association of Drug Court Professionals say that approach ignores science.

“Saying ‘we are abstinence only’ is in direct violation of the best practices,” Doug Marlowe, chief of science, law and policy at the national association, told PublicSource.

And though the state estimates that more than 70 percent of all inmates suffer from untreated addiction, only 32 Pennsylvania counties currently have adult drug courts. The state’s remaining 35 counties have little choice but to lock offenders up.

Pennsylvania spends $5.3 billion on the costs of addiction.

On a slushy, bitterly-cold Monday in March, dozens of offenders who’ve battled addiction fill benches on the fifth floor of the Allegheny County Courthouse.

Most are in street clothes, a sign that they’re back in the community or living in treatment facilities. In addition to close monitoring, they check in once a month to be sure their recovery is on track.

The process is informal, with Nauhaus acting less like a traditional judge and more like a counselor. He talks with offenders about their progress and failings. They chat about everyday things like jobs and the dismal weather.

Applause erupts for two defendants who snip off ankle bracelets — an indication that they’ve complied with strict supervision and abstinence requirements and the court now trusts them.

Others appear in red jail suits, handcuffed and shackled. Nauhaus is not impressed.

“You need to grow up,” he tells a defendant who was locked up after being thrown out of a treatment facility. “You need to mature. You need to get a grip on life.”

Drug courts offer defendants a bargain. Enter treatment, stay off drugs and avoid jail and prison, at least in the long run. Or serve your time, miss out on treatment and return to the life of an addict that brought you to court.

Since 1998, scores of serious but non-violent offenders in Allegheny County have been given that choice every year.

Success means keeping offenders out of court — and jail — in the future.

“I generally don’t see them back in the system,” said Rebecca Hudock, an assistant public defender who has been involved in Allegheny County’s drug court for six years.

Another measure of success is the taxpayer money saved. For 2012, supervising an inmate on probation cost an average of $3.20 per day, according to the court. Jail time would cost $68.17 each day. State prison would cost $116, the court said.

Last year, the Allegheny County drug court had 235 total participants. Of those, 54 offenders failed or withdrew, 28 graduated, and 153 were still in drug court at the end of the year.

Offenders can stay in drug court for more than two years. Those who fail get sentenced for their crimes, to which they’ve already pleaded guilty.

Success varies from court to court. The national association says three-quarters of all drug court graduates are arrest free after two years. The state has yet to publish statistics.

With very few exceptions, all of Allegheny County’s drug court defendants are required to be abstinent. No medications to help with their cravings, though offenders can be accepted to the program on medication if they agree to taper off.

Court officials and treatment experts say the meds are dangerous. Suboxone, for instance, is a heroin-replacement pill to lessen cravings. It’s not supposed to get a user high.

But Hudock said it’s commonly sold on the street. An addict can get a prescribed dose, buy more illicitly, and get high.

“They’re so high, you might as well just have shot up and come into the courthouse,” she told PublicSource.

WITF, the NPR station in Harrisburg and a PublicSource news partner, recently examined a strict policy in York County that prohibits methadone and Suboxone and requires participants to get off addictive medications, even if they’re used to treat mental health problems.

The joint Union and Snyder County drug court has strict bans on certain medications, including many opiates, but it allows rare medication-assisted treatment.

“Our treatment policy is that every single person is evaluated differently,” said Steve Diehl, treatment court coordinator for the combined judicial district.

The national drug court association found that that only 56 percent of more than 2,700 drug courts use medications like Suboxone. However, about 25 percent more would use them, they found, if medications were available locally or were more affordable.

The Administrative Office of Pennsylvania Courts oversees drug courts, but mostly lets them set their own rules. It does not take a stand on medication-assisted treatment. Neither does the Pennsylvania Association of Drug Court Professionals.

But both point to standards published by the national association. That organization takes a firm and explicit stance.

Recently, the White House, along with several federal health and treatment agencies came out against programs that ban medication-assisted treatment, going so far as to exclude drug courts with bans from federal funding.

In Montgomery County, Judge Steven O’Neill knows that drugs like Suboxone are abused on the street.

But that’s not drug court.

If closely monitored — and coupled with therapy — medication can be effective. O’Neill’s drug court allows the meds, but it’s not like they have bowls full of Suboxone, he said, that they pass around to defendants.

Addiction is a disease, he said. Willpower can’t fix that.

An opioid addiction feeds itself by causing physical dependence. Not getting heroin or pills will cause violent physical sickness. He compares an addict’s craving opiates to a diabetic whose pancreas has stopped producing insulin.

“You’re not going to say ‘Toughen up. I’m not going to give them insulin,’” said O’Neill, who previously served as president of the Pennsylvania association.

Taking a recovering addict off medication can lead to relapse, which can be especially deadly if the body has lost its tolerance for opiates.

Erica Bartlett, an assistant public defender in Philadelphia, which started the state’s first drug court in 1997, said there’s no justification for a blanket ban.

Each defendant should be evaluated individually to see if medication is appropriate, said Bartlett, who was a member of the state committee that developed accreditation criteria for drug courts.

Nauhaus contends that his court has been effective without those chemical aids.

The debate over medications that help with cravings is only relevant in places that actually have drug courts.

In most counties in the state, defendants have no choice but to go to court and jail, where many of them are destined to return. Over and over.

Judge Richard Masson has wanted to start a drug court for years.

But he is literally the only common pleas judge in both Cameron and Elk Counties.

“It would be very, very difficult to set aside time,” he said.

Drug court depends on regular monitoring and hearings, and Masson’s district is so rural it can be tough to get defendants to court. The region is severely lacking in treatment facilities.

Masson was hopeful that nearby counties would band together to create a traveling drug court. But that hasn’t happened.

“The concept was not one that was shared by the entire region,” said Karen Blackburn, the state’s coordinator for drug and other problem-solving courts.

Elsewhere, it’s a matter of political will and budgeting.

Treatment isn’t cheap. Neither is monitoring. And a court can’t work unless a judge is willing to take it on.

If counties don’t invest, taxpayers pay for addiction one way or the other. Remember that $5.3 billion number? Meanwhile, offenders don’t get treatment.

The Pennsylvania Commission on Crime and Delinquency contributes some money that can be used for drug courts. Federal money is also available, but grants are competitive, and officials have made clear that they won’t give money to programs that don’t agree to use medication-assisted treatment.

So while drug courts are increasingly accepted as a normal part of the justice system, they exist only if they can be paid for by counties.

For years, the state has set aside millions for drug court staff and treatment funding and it recently expanded eligibility for offenders.

So crossing the Ben Franklin Bridge from Philadelphia to Camden, Bartlett would move from a state where defendants in more than half the counties have no access to drug courts to a system funded directly by the state.

That system isn’t perfect, but Bartlett and other advocates said mimicking New Jersey could lead to reduced crime, lower costs and more help for offenders.

“It’s in their budget,” Bartlett said. “I think that’s what the Commonwealth needs.”