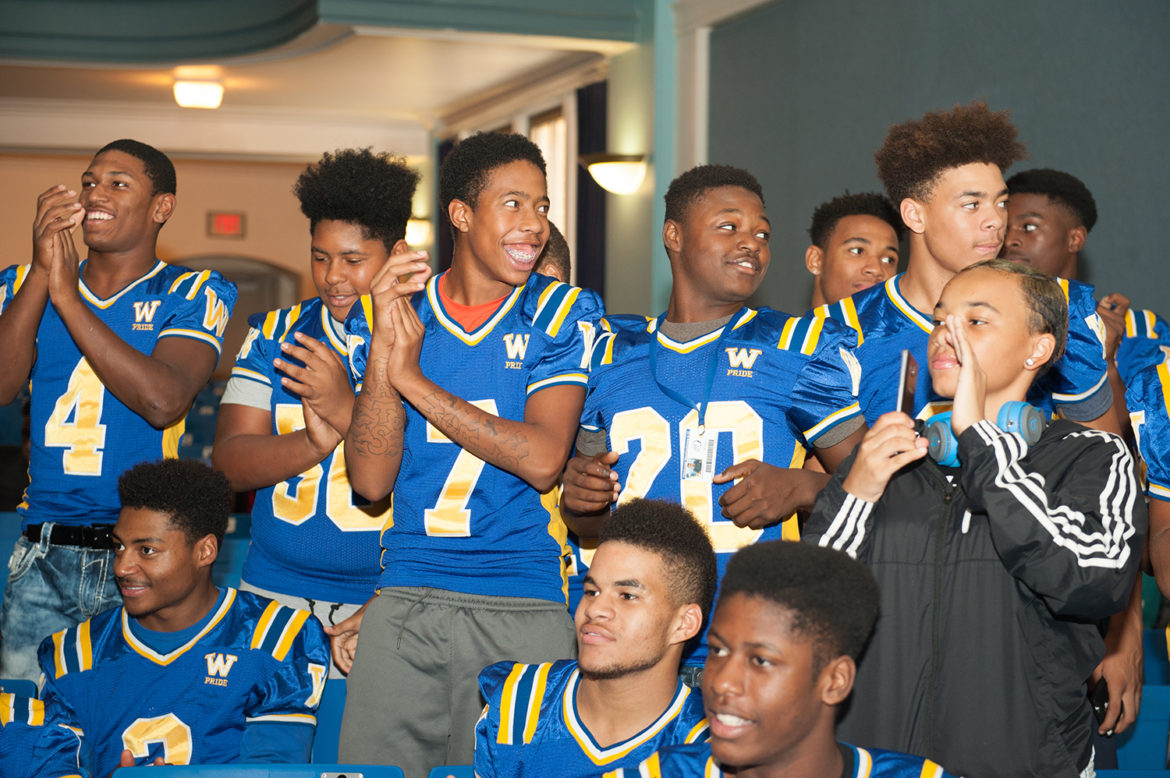 The Westinghouse Academy football team cheers for the alumni being honored at the Wall of Fame induction at the high school on Oct. 5. (Photo by Sarah Collins/PublicSource)

The drum line’s beat bounced off the walls of the Westinghouse Academy auditorium.

The cheerleaders chanted: “Are you ready for Westinghouse? Because we are ready for you.”

The audience for the induction ceremony of the Westinghouse Wall of Fame was on its feet, clapping and swelling with school and community pride.

But that bubble of pride was deflated minutes later when senior D-Ama Taylor took to the stage to recite a poem she had written about her experiences as a young black woman being educated at a high school that is more than 90 percent black, and more than 80 percent poor and in the bottom of the city, county and state achievement ranks.

Pacing in front of the alumni inductees who included a poet, pediatrician, college administrator, technology company founder and two Harvard Law School graduates — students from previous eras of the school — 17-year-old D-Ama described a world in which she and her classmates are labeled as failures by low test scores. Outsiders question their intelligence and connect it to the color of their skin.

D-Ama is not discouraged that Westinghouse test scores are far below those of the state average, that black students at her school score significantly lower than their white peers year after year, that 20 percent of her fellow students are homeless and that half of them are transient.

She believes they can still succeed.

“We will show them when we become lawyers and doctors,” she said.

A few weeks ago, scores on the state’s PSSA exams for students in grades 3-8 and the Keystone exams for secondary students in the Pittsburgh Public Schools [PPS] told the same story yet again: Achievement among white students is markedly higher than their black counterparts.

In the upcoming School Performance Profiles (expected to be released later this month), the state labels 34 city schools, including Westinghouse, as low performing. Many of those schools have a majority black student population.

The Pennsylvania System of School Assessment [PSSA] exams are given annually to public school students in grades 3-8 to measure proficiency levels in math and English language arts. PSSA exams in science are given in grades 4 and 8 only. Third-grade reading scores are critical. Educators say that after third grade, students transition from learning to read, to reading to learn, as their school work in all subjects becomes more complex and requires reading comprehension.

At a recent education committee meeting, PPS School Board President Regina Holley said she was “shocked and saddened” by some of the scores, especially considering the programming instituted by the district to improve scores.

“This gives us a lot to talk about as a board,” Holley said.

Also disappointed in the test scores is James Fogarty, executive director of the advocacy group A+ Schools. “This isn’t OK to do what we are doing and keep getting the same outcomes, it’s just not,” Fogarty said.

Westinghouse is under particular scrutiny this year because of the transfer of about 200 students in grades 7-12 from Wilkinsburg, where the board shuttered the middle and high schools. Wilkinsburg test scores mirrored those of Westinghouse.

Keystone Exams are taken for algebra I, biology and literature. Students take the exams at the completion of each of the courses. Their grades are banked until they are in 11th grade and then reported as the scores of the 11th-grade class.

Superintendent Anthony Hamlet, who took the reins of the district in July, said the district broke down the test results by race — even though the state no longer publicly reports them that way.

“Now that it is in your face, it’s real,” Hamlet said. “We are going to create this sense of urgency to see what we need to do to change this.”

That includes making sure teachers are trained to teach students to the rigor of the Pennsylvania Core, the state’s version of the Common Core, and also bringing in outside organizations to support student “social, emotional and mental health,” he said. They will also do more interim assessments, not just wait for the test scores, Hamlet added.

The academic performance at Westinghouse makes it representative not only of other majority black schools in Pittsburgh, but also across the nation, where poor black students are increasingly more concentrated and isolated from thriving communities.

A 2014 report published by the Economic Policy Institute chronicled the issue, pointing out that poor academic performance is as much about poverty and socioeconomics as race because many low-achieving black children live in neighborhoods with multi-generational poverty. The report concludes that to solve the educational problems, officials must address the socioeconomic problems of the communities.

“The class problem in Pittsburgh is a race issue.”

Walter Lewis, director of the Office of Promise Fulfillment at Homewood Children’s Village, a community partner at Westinghouse, echoed that conclusion.

“I think it’s important to explore the nuance between race and class,” he said. “The class problem in Pittsburgh is a race issue.”

Members of the Westinghouse community, both students and school officials, agree on many of the problems posed by poverty. Homelessness or housing instability. Hunger. Addiction. Violence. Absent parents. Teens acting as parents to siblings.

As for the state test scores, D-Ama said people don’t realize all of the factors in the lives of students. To those who think Westinghouse students are failures because of the low scores — “They don’t know what everybody has gone through,” she said.

Witnessing violence, drug deals and domestic abuse in their homes and neighborhoods, prompts some Westinghouse students to always “have their guard up,” adding to the tension at school, said D-Ama and classmate Allen Barr.

“They see moms and dads doing drugs or their dads beating up their moms. They can’t process the fact that all of this is going on and concentrate on school,” said Allen, a 17-year-old senior.  “I’ve been in homes where I see my friend’s parents do drugs. I feel for my friends. I didn’t know they had to go through this.” D-Ama Taylor, 17, a senior at Westinghouse Academy, talks about some of the difficulties at her high school with friend Allen Barr. (Photo by Sarah Collins/PublicSource)

Allen likens it to the sculptures of the mythical figure Atlas holding a globe on his back. “That’s how they feel. The world is on their backs,” he said.

Lewis said Homewood Children’s Village is working “to chip away at the weight that they are carrying. How do we lift this so that the kid knows that ‘I’m not supposed to lift this?’”

Hamlet said he has been studying research on how the brain works and has found that brains are conditioned to the environment in which they live. He said, “If kids are constantly in stress, their brain is learning about how to succeed in their environment. How they will get home safely. How they will eat that night. They don’t have the ability to think about school.”

“That’s how they feel. The world is on their backs.”

“I’ve seen students break down because they can’t learn. People won’t allow them to learn what they need to learn,” Allen said, adding that younger students observe and mimic the older students’ behavior so the cycle repeats itself.

While some teachers are willing to stay after school to help tutor students, sometimes it just isn’t enough, D-Ama and Allen said.

Even though she is frustrated at the disruptions, D-Ama says it’s hard for her to be angry with her classmates. “Sometimes you can’t blame them because they are having something detrimental going on in their life,” she said.

Westinghouse Principal LouAnn Zwieryznski is starting her third year at Westinghouse, the longest tenure of any principal in recent years. She is committed to trying to break the cycle of disruption and hopelessness among the students. She revived the Wall of Fame induction after a five-year hiatus so the students could see that successful people have come from Westinghouse.

“This is the year we are going to write our own story,” Zwieryznski keeps telling the students. LouAnn Zwieryzniski, principal of Westinghouse Academy, tells D-Ama Taylor how much she enjoyed hearing her recite her spoken-word piece. (Photo by Sarah Collins/PublicSource)

Before coming to Westinghouse, Zwieryznski was principal at Faison K-5 in Homewood and raised achievement high enough to be considered one of Pittsburgh Public Schools STAR schools (Students and Teachers Achieving Results). STAR schools are those who are ranking in the top 25 percent in the state based on the growth of their test scores. But Zwieryznski said it will be more difficult to achieve that status at Westinghouse because of the larger grade span and more complex problems with older students.

Lewis and Fogarty look to the stability brought by Zwieryznski as a building block for turning things around at Westinghouse. In addition, the ‘community schools’ effort being instituted at Westinghouse and other schools around the city is working to bring partnerships with community agencies that will meet the extraordinary needs of students who live in poverty.

Zwieryznski said the groundwork has been laid for school and community partnerships, but now officials “have to figure out the correct partnerships.”

Lewis said it’s largely about restoring hope to students who have learned to live without it. Zwieryznski agrees. “Ask a student where they will be in five years. Some say ‘I don’t know if I will be alive in five years,’” she said.

Allen and D-Ama said that’s evident in the way that many students ignore the wall of fame in the school hallways.

But the duo has already picked out the place where they hope their photo will someday hang.

“I feel like there are some people who don’t even look at the wall. Every day when I walk in, I look up,” Allen said.

Mary Niederberger is a freelance writer focused on covering youth and education in Pittsburgh. She can be reached at marynied@msn.com or on Twitter @MaryNied. PublicSource web developer Natasha Khan produced the video of D-Ama Taylor.