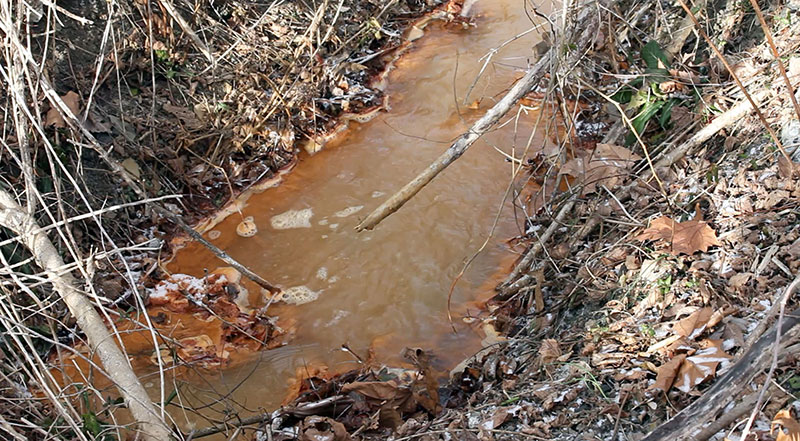 The Pennsylvania Department of Environmental Protection will investigate whether there are radioactive materials in Ten Mile Creek, a major tributary of the Monongahela River in Greene and Washington counties.

The Monongahela is a primary source of drinking water in the region, but John Poister, a DEP spokesman, said it is too early to tell whether there are any public health concerns.

“At this point, we don’t think there is an immediate threat to the health and safety of the people in that vicinity,” he said.

Ten Mile Creek is in the heart of Southwestern Pennsylvania’s shale gas fields, an area that is also plagued with waste from legacy coal mining.

The DEP plans to begin testing the creek in late June. The investigation comes more than a year after the department did initial tests that showed levels of radioactivity above what is normally seen in Pennsylvania, Poister said.

The chemicals detected are not typical of what you’d see in coal mine discharges, but rather are common in fracking wastewater, water quality experts told PublicSource.

Those initial tests occurred in April 2014, after years of prodding by local environmental groups, whose members shared the results with PublicSource after obtaining the documents through open records requests and DEP file reviews.

The DEP had not released the results to the public.

“The DEP has known of elevated levels of radiation in the streams for more than a year, during which time countless people have recreated in [the water] and been exposed to possible harm,” said Patrick Grenter, director of the Center for Coalfield Justice in Washington County, one of the groups that shared the DEP test results.

“The community deserves a full accounting of what exactly is causing elevated radiation levels and what the risk is to public health and the environment. Anything less than that is unacceptable and potentially putting lives at risk,” he said.

The 2014 results showed combined levels of radium-226 and radium-228 in the creek water downstream of the abandoned Clyde Mine discharge in East Bethlehem Township, Washington County, at nearly 19 times higher than what federal drinking water standards allow, 65 times higher upstream and 60 times higher in the water coming directly out of the mine discharge.

The DEP’s Bureau of Radiation Protection will investigate to see if there is a possible link between the radioactivity in the creek and shale gas drilling, Poister said.

If so, it could confirm suspicions scientists and residents have about wastewater from shale gas drilling creeping into Pennsylvania waterways.

“We want to find out what the source is” Poister said. “We’ll be doing a pretty exhaustive set of lab tests and analysis.”

PublicSource also showed the DEP test results to two scientists who said they’re now planning on doing their own tests for radioactivity in the streams and discharges the DEP tested for in 2014.

Radioactive materials, including radium and uranium, are naturally found in shale and other rock formations from which oil and gas is extracted.

When shale is broken apart by the process of hydraulic fracturing, or fracking, groundwater laced with these materials can enter the water mixture used for fracking and come back to the surface through the wellbore, the hole dug to form a well.

There are federal standards on the amount of radionuclides that can be in drinking water because of their potential to cause cancer if consumed over many years.

In January, the department released a multi-year comprehensive radiation study that concluded there is a low risk of radiation exposure to the public and gas workers from shale gas development. The study also concluded there are “potential radiological environmental impacts” if fracking fluids are spilled.

The 2014 DEP tests that sparked this investigation were performed only after members of the local Izaak Walton League of America repeatedly asked the department to test for radioactivity and other chemicals in the creek.

The group had tested streams and mine discharges in the areas and suspected shale gas wastewater was present.

They found high levels of bromides, a chemical found in shale wastewater. When mixed with chlorine at a drinking water treatment facility, it can create carcinogenic chemicals called trihalomethanes.

The DEP will also be sampling for bromides as part of this investigation, Poister said.

Ken Dufalla, the group’s chapter president, said the wastewater could have been dumped in mine shafts or leaked into mines through shoddy well casings. He also said it’s possible the radioactivity is a remnant of when the shale gas industry used to take its wastewater to treatment plants, which treated it and released it into rivers and streams.

PublicSource first wrote about Dufalla's warnings to regulators and politicians in 2013.

“I'm sad I had to go through all of this to get them to do an investigation when it’s their responsibility in the first place,” Dufalla said. “But the time for blame is over. Let’s just get it cleaned up.”

The DEP owns and has had full oversight over the abandoned Clyde Mine since its owners went bankrupt years ago.

The same day the DEP tested Ten Mile Creek last year, it took samples of discharges from two active mines, the Emerald and Cumberland mines. Those tests also showed elevated levels of radionuclides, according to records obtained by PublicSource.

Those mine discharges, owned by Alpha Natural Resources, flow into two other area creeks, the Smith and Whiteley. The company did not respond to requests for comments by this story’s deadline.

Poister said that the new investigation will center only on Ten Mile Creek because concerns were raised by Izaak Walton League members about stocking the creek with fish, a community service the league performs every year.

The DEP plans to test the water, sediment, vegetation and fish in the creek above and below Clyde Mine at a total of 13 locations, Poister said. They will also test the nearest water authority, but he didn’t know which water authority that is.

The results of the Ten Mile Creek tests have caught the attention of scientists who are national leaders in the study of drilling and coal mining effects on water.

“If the radium data is correct, this is the first time I have seen elevated radioactivity associated with coal mine effluents,” said Avner Vengosh, a geochemist at Duke University.

“Yes, those numbers look high,” said Paul Ziemkiewicz, director of West Virginia University’s Water Research Institute. “We do know that there are substantial radioactive concentrations in flowback or produced water from drilling. I have not known anyone who has identified that in coal mine drainage.”

Vengosh said the radionuclide levels in the DEP’s small sampling are not typical.

“So that becomes the big question,” he said. “Why do you see that? Is it something we haven’t seen before from acid mine drainage? Or does it have something to do with fracking effluents that are being introduced into it?”

In 2013, Vengosh and other scientists discovered radium in Blacklick Creek, in Indiana County. They found radium levels were 200 times greater at a discharge point of a facility that treated Marcellus gas wastewater than in sediments upstream from the site.

In the study, the scientists were able to determine markers that indicated the chemicals came from fracking operations. Vengosh said that’s what his team will look for with these streams and mine outfalls.

Poister said the DEP will also look for chemical markers that would indicate frack wastewater in their investigation on Ten Mile Creek.

Radium-226 has a half-life of 1,600 years. It can cause the bioaccumulation of radium in sediment and end up in fish and the environment, Vengosh said.

Vengosh said drinking water in communities will need to be evaluated for potential health risks once more data is gathered.

As for Dufalla, “I am not going to stop until I find out who put it in there, why it's in there and until it's cleaned up,” he said.