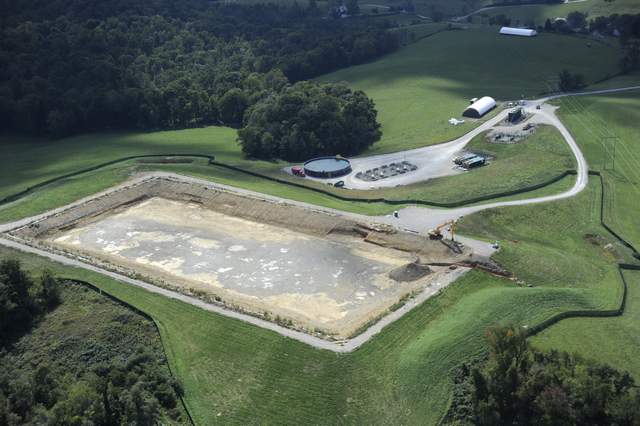 Range Resources must pay $4.15 million in fines – the largest amount ever levied against a Marcellus Shale driller – for various leaks and other problems at six of its water impoundments in Washington County.

In addition to the fine, the consent agreement announced by the state Department of Environmental Protection on Thursday requires Range to close five impoundments and upgrade two others.

The Southpointe-based company must immediately close the Lowry, Worstell and Kearns impoundments, while also closing the Bednarski impoundment by April 2015. The company was in the process of closing the beleaguered Yeager impoundment in Amwell Township, which is also on the consent agreement list.

The Carol Baker impoundment in Chartiers Township and Jon Day impoundment in Amwell, which was excavated after a leak was discovered there in April, must be upgraded to “next generation” standards with thicker liners and better leak-detection systems.

“This landmark consent order establishes a new, higher benchmark for companies to meet when designing future impoundments, which is an environmental win for Pennsylvania,” DEP Secretary Christopher Abruzzo said.

Range spokesman Matt Pitzarella said the company is “deeply disappointed” that violations occurred, but they are “excited to implement newly established best practices and technologies that have been jointly developed with the DEP over the last several months and years.”

A file review performed by Observer-Reporter staff at DEP’s Southwest Regional Office in Pittsburgh last month showed all of Range’s nine centralized impoundments in Washington County, most of which were constructed and permitted in 2009 and 2010, experienced problems since they were put into operation.

The fine also comes nearly a year to the day after the DEP fined Range $107,500 in three consent agreements Sept. 17, 2013, for various problems at multiple sites, including the Jon Day and Worstell impoundments and Yeager gas well, according to the file review.

Range did not submit as-built plans – a required condition of a centralized impoundment permit – for the Lowry, Bednarski, Jon Day, Carol Baker, Carter and Yeager impoundments.

The file review found numerous other problems and violations in several Range impoundments over the past four years. More recent issues, some of which were not included in the files, were made public Thursday in the DEP’s consent agreement report.

A leak reported at the Jon Day impoundment in Amwell Township April 15 caused by a tear in the liner, contaminated groundwater with chloride, prompting environmental cleanup crews to remove up to 15,000 tons of soil from the site over the past five months.

DEP inspectors first became concerned with the Yeager impoundment in November 2011 when two test samples showed elevated chloride levels. DEP Water Quality Specialist John Carson wrote to Glenn Truzzi, environmental engineering manager at Range, on Dec. 28, 2011, that he was “concerned about the Yeager Impoundment” and the company’s plan for it “raises more questions than it answers.”

It also was at the center of a lawsuit in which nearby residents requested Range to disclose all fluids used or brought to the site. The impoundment continued to operate until Range submitted a closure plan in February and has since been working to shutter it. A site assessment report submitted by Range on May 15 shows soil was contaminated beneath the liner.

Range received a notice of violation for 100 gallons of brine water that spilled from the manifold area of the Carter impoundment in Mt. Pleasant Township March 21, 2011, and spread about 200 feet from the area. The company was cited for failing to contain fluids and residual waste, and independent testing found levels of arsenic, cadmium, chromium, selenium and silver “outside control limits.”

On March 24 of this year, a temporary water line connected to Carter caused erosion and sedimentation to enter an unnamed tributary along Cherry Run. The DEP is mandating the Carter impoundment be used to store only fresh water going forward. Range also will be required to install a groundwater monitoring well network at the impoundment and perform an environmental site assessment once it is permanently closed.

Kimberly Staub, who lives directly next to the impoundment on Walnut Road, fought the impoundment’s presence for years and said she is skeptical about Range being permitted to continue operating it as a freshwater pond.

“In a switch of a pen, they can switch it over to flowback water in a second,” Staub said of the standard procedure for modifying a dam permit. “I don’t want any fresh or frack water.”

However, Staub added the DEP’s consent order was “a validation for me and for everyone else who lives around these impoundments that they keep saying are perfectly fine to be in residential areas.”

During a transfer from a group of tanker trucks to the Carol Baker impoundment in Chartiers Township July 7, 2011, about 170 gallons of frack fluid discharged from a faulty check valve and hole in the secondary containment system. A hole was found in the liner around February 2012, and samples from groundwater showed elevated levels of manganese, chlorides and total dissolved solids. The affected soil was excavated, although it was not known how much was removed.

The DEP reported March 9, 2010, that 750 gallons of frack fluid discharged onto the ground when a pipeline connector between the Bednarski and Best impoundments pulled loose. The fluid went about 200 yards over a hillside onto the neighboring Teagarden farm and absorbed into ground.

The Worstell impoundment, now known as Cecil Township No. 23, will close after operating for four years because of “elevated levels of chloride, total dissolved solids and sodium” detected between Oct. 24, 2013 and Aug. 7, 2014. The file review at the DEP also revealed a pressure valve released a barrel of treated frack water to the ground in January 2011, and Weavertown Environmental was called in to remove soil. The fluids did not reach any waterways.

Cindy Fisher, vice chairwoman of the Cecil Township Board of Supervisors, applauded the DEP’s consent order.

“We were extremely pleased with the DEP’s action and that (Range) will be forced to fix the damage that they’ve caused in our community,” Fisher said.

A hole in the Lowry impoundment liner in Hopewell Township, constructed in 2008 on farm property that was previously used for hay, caused diluted frack fluid to discharge into an unnamed tributary to Cross Creek in February 2010.