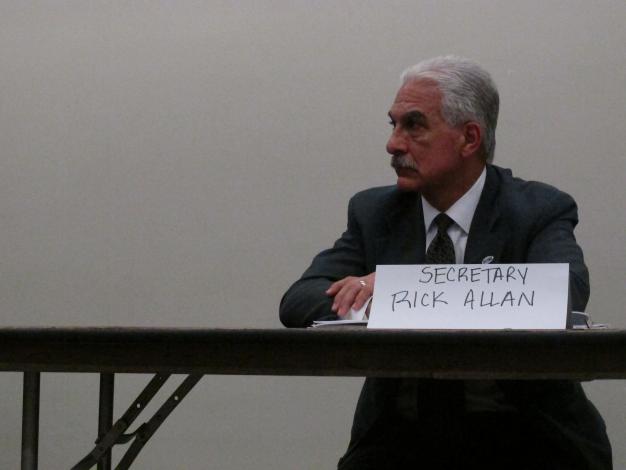 As the agency that oversees 2.5-million acres of public land in Pennsylvania formed policy on drilling in state forests, the agency's head met frequently with oil and gas lobbyists in the capitol, including stops at upscale restaurants.

That's according to the calendar of Richard Allan, former Secretary of the Department of Conservation and Natural Resources (DCNR).

As part of an investigation, 90.5 WESA and The Allegheny Front obtained and examined more than 600 pages of Allan's appointment calendar. Allan headed the agency from the beginning of the Corbett administration until he was let go in June of 2013.

Over a period of 21 months – from March 2011 through the end of 2012 – Allan's calendar lists dozens of meetings with gas exploration and production companies, pipeline and distribution contractors, industry suppliers, and lobbyists from firms and trade groups that represent the industry.

The calendar also lists scores of 'private' meetings for which no information is provided.

During his tenure at the agency, Allan served on the governor’s Marcellus Shale Advisory Commission, which drafted recommendations that became the basis for Act 13. The controversial legislation, approved in 2012, regulates natural gas drilling in the Commonwealth.  Even more controversial, in some quarters, was the administration’s more recent decision to lift a moratorium on awarding new drilling leases in state parks and forests overseen by DCNR, Allan’s old department.

Critics say both policy outcomes were favorable to oil and gas interests. These critics include state Senator Jim Ferlo (D-Allegheny) – who says the industry unduly influences state policy. Speaking at a rally last year, Ferlo accused the administration of downplaying environmental concerns while maintaining a cozy relationship with the natural gas industry.

“An industry,” Ferlo said, “that lacks proper regulatory oversight, due to what I call power politics – played out in our state capitol, and certainly by the administration in the state capitol that could care less about protecting our environment and our natural resources.”

That’s a strong claim, the kind that gets thrown around often in the heat of partisan politics. It’s also difficult to support empirically. But it is possible to get a sense of the relationship between policymakers and stakeholders by studying how they interact. Former Secretary Allan’s appointment calendars (below) offer a window into his daily activities as the administration weighed the decision of whether to end the leasing moratorium.

Allan's meetings with industry included lunches and dinners that Allan took with energy companies and lobbyists at upscale Harrisburg restaurants. State ethics rules do not require officials to report gifts of hospitality so long as their value does not exceed $650, so there is no easy way to know who picked up the tab for those outings.

But who paid may not be that important. Even critics of these relationships agree there is nothing intrinsically improper about friendly relations between public officials and the constituencies they work with. Because drilling issues can be technically complex, policymakers often must work closely with drillers and their paid advocates – not just because industry has a valid stake in the process, but also because industry people are often among the most knowledgeable parties available to provide input.

State representative Greg Vitali (D-Delaware), a frequent critic of the industry, agrees that lobbyists have a legitimate role to play.

“They have very important information to convey, and they should convey it,” Vitali says. “We need them to convey it. It helps us make fair decisions.”

But where oil and gas interests were able to make their voices heard in Allan’s office, some groups, like the environmental watchdog PennFuture, feel they’ve been shut out of the process.

“Our recent experiences are that the current administration seems to have a door that’s wider open to industry than it is to the public and citizens’ groups,” says PennFuture Chief Counsel George Jugovic.

The industry is investing substantial resources to lubricate the hinges on that door. Since the drilling boom began in 2007, oil and gas interests have outspent environmental groups $34 million to $1.5 million on lobbying in the state.

Allan’s calendar records no meetings with PennFuture, or with the Pennsylvania Sierra Club -- two of the leading organizations in Pennsylvania’s anti-fracking movement. Both groups were regularly included in conversations with DCNR under previous administrations.

“It didn’t mean that they agreed or disagreed with you all the time,” Jugovic says. “But on controversial issues they tended to be willing to subject their decisions to public scrutiny. And we find that to be less the case now.”

Allan said in a phone interview that, contrary to appearances, his door was always open to environmental groups. His schedule does show meetings with groups like the Pennsylvania Environmental Council on whose board he served before joining the administration. Conservation-oriented foundations including The Nature Conservancy were also represented, as were several sportsmen’s and outdoor-recreation groups. All of those meetings combined, however, add up to fewer than half the number of industry contacts indicated in the calendar.

Allan said those data are misleading because he had frequent informal contacts with environmental groups, which would not have been recorded on the calendar. He also said that to the best of recollection he never personally turned down a request for a meeting -- though such requests were normally handled by a scheduler.

Going only by the record, Allan had contact with lobbyists and industry representatives, on average, every other week. That includes at least 24 meetings with developers like Anadarko Petroleum and Chesapeake Energy accounting for more than 22 hours of calendar time.

Allan says most of those meetings were related to existing leases.

But he also spent more than 51 hours, in at least 30 meetings, with representatives from lobbying firms that represent the industry, and from industry groups like the Marcellus Shale Coalition  and the Associated Petroleum Industries of Pennsylvania.

A much higher number of calendar events provide no information whatsoever about who Allan was meeting with, or what was discussed. A total of 170 appointments were labeled “private,” or listed under similarly vague language such as “discussion,”  “meeting,” or simply “matters.”  On several occasions in 2012, entire work days were blocked out in this way. In total, the unspecified appointments account for more than 283 hours of the Secretary’s time.

“It is somewhat unusual that there seems to be a lack of transparency when it comes to providing a complete and detailed picture about their schedule of what they’re doing on the public time and dime,” says Alisha Green, with the nonpartisan Sunlight Foundation. “I think providing a detailed picture of meetings that are held on an official’s time is incredibly important to providing public accountability.”

DCNR spokeswoman Chris Novak said in an email that she could not provide information about how Allan handled his calendars when he worked at the agency. Novak said the agency’s scheduling software allows some appointments to be designated “private,” but that the practice is normally reserved for personal, non-work-related matters such as doctor’s appointments.

Allan says he was treated for a health problem in 2012 which might account for some, but not all, of the unspecified listings. He could not otherwise account for his activities during the hundreds of hours of which there’s no discernible record.

There may be valid reasons to omit the names of contacts, Green says, but in those cases it’s up to the official to justify why details were withheld. In any case, she says, the large number of “private” meetings alone raises transparency concerns.

“I think if there were daily meetings or even weekly meetings that seem to accumulate a large portion of that person’s official time, then there should be questions about what they were doing,” Green says.

It’s not the first time the handling of public records by officials in the Corbett administration has raised eyebrows. Former state Education Secretary Ron Tomalis resigned his job as a special advisor to the governor last month, after a records request for his calendars by another media outlet yielded scant evidence he’d been doing any work. Education Secretary Carolyn Dumaresq explained that was because department staffers routinely delete their emails. Responding to that disclosure, Governor Corbett told reporters that he too avoids using email and regularly deletes his messages in order to circumvent a possible open-records request.

It all points to ambiguity in the Right-to-Know law as to how agencies should handle information that could end up in the public record, according to Nathanael Byerly, with the state’s Office of Open Records.

Current DCNR Secretary Ellen Ferretti, who previously served under Allan, said in a statement that she believes it’s important for the sake of transparency to maintain a clear record of her meetings.

“DCNR-related meetings and their participants are noted in her calendar,” Novak wrote in a statement on Ferretti’s behalf. “Meetings that are marked private are for personal reasons, (i.e. a dr’s appt).”

As to the current Secretary’s relationship with environmental groups, the statement cites Ferretti’s involvement with various boards and advisory commissions engaged in environmental and conservation work. It says Ferretti is “regularly accessible to an array of stakeholders and officials,” including PennFuture and others critical of fracking, among “numerous” others.