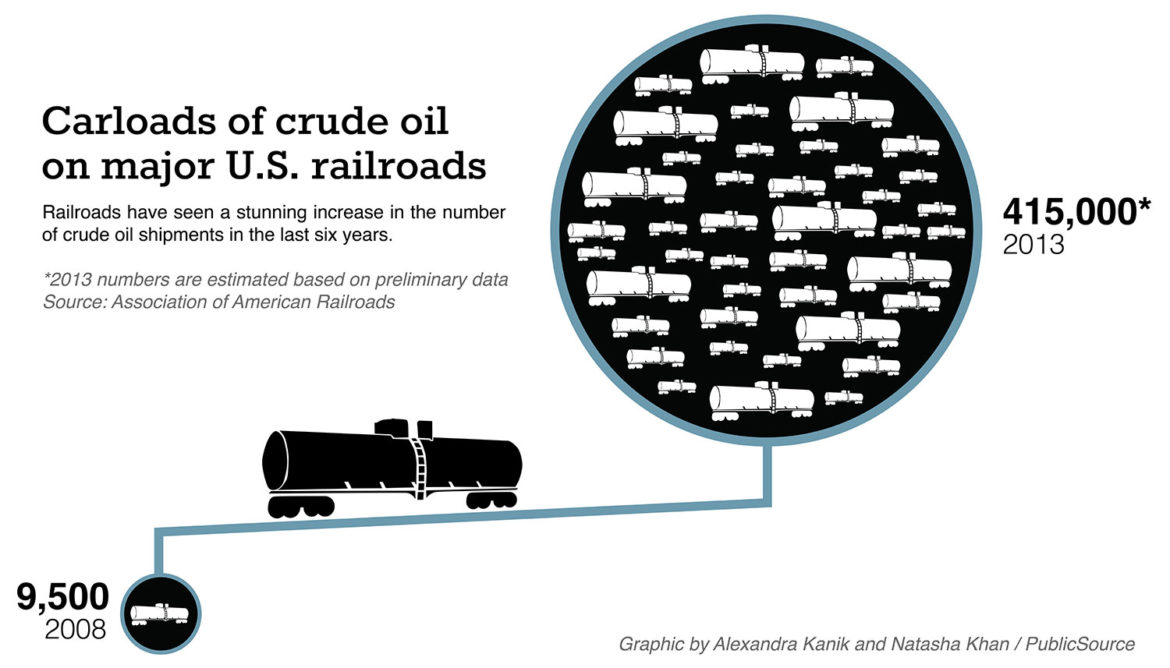 In These Times, a left-leaning magazine in Chicago, recently uncovered emails that showed what they called a "cozy" relationship between North Dakota's oil industry and the federal officials charged with regulating it.

The article said: "the emails cast serious doubts on the integrity of the federal government's supposed crackdown on the industry's shoddy shipping practices — a subject of growing concern in the midst of a largely unregulated, and in some cases, deadly transport boom."

A sharp increase in North American crude-oil production — mainly because of fracking ― has pushed a high percentage of crude oil onto the tracks. There has been a series of derailments in North America over the past year that have caused explosions —  the worst was when 47 people died after a train carrying crude oil from the Bakken Shale derailed and exploded in Lac-Megantic, Quebec in July.​

While investigating the deadly derailment, Canadian safety officials found that American shippers in North Dakota had "understated the volatility of the oil" that exploded in the small Quebec town, according to the article. As a result, the Bakken crude oil was packaged and shipped improperly.

After this discovery, the U.S. Department of Transportation's Pipeline and Hazardous Materials Safety Administration and the Federal Railroad Administration (the two agencies that regulate railroads in the U.S.) started cracking down on oil shippers who mislabeled their cargo. Part of the enforcement effort, called the "Bakken Blitz", included having agency officials show up unannounced at rail facilities to inspect rail equipment and test the flammability of the oil.

Here's what In These Times found:

An email obtained through a Freedom of Information Act request strongly suggests that Kipton Wills, Central Region Director of PHMSA's Office of Hazardous Materials Enforcement, pre-arranged at least one of his agency’s visits to a Hess Corp. rail yard in Tioga, North Dakota, last October.

“We will accommodate your request to inspect trucks at the Tioga Rail Terminal,” Jody Schroeder, the rail terminal supervisor, wrote in an email to Wills dated October 3, 2013—five days before the inspection took place. “At your convenience please let me know your schedule for this event.”

Schroeder later confirmed that Wills reached out to him about the visit. Earlier this month, PHMSA spokesperson Gordon Delcambre told In These Times that such inspections are impromptu. “They’re unannounced,” he said. “[Inspectors] figure out who they’re going to visit ahead of time, make plans, go to the area and then start knocking on doors.”

A Department of Transportation spokesman later told the magazine that "prior coordination" of the facility was needed because the agency was inspecting other “entities (highway carriers)” and wasn’t just inspecting rail equipment and performing oil testing.

During the inspection of the Hess rail yard, PHMSA inspectors found 10 out of 18 oil samples were mislabeled as less flammable than they really were. The agency did issue a number of fines to Hess, but perhaps, the fines would have been much higher if the rail yard hadn’t been warned by the agency about the inspection, according to the article.